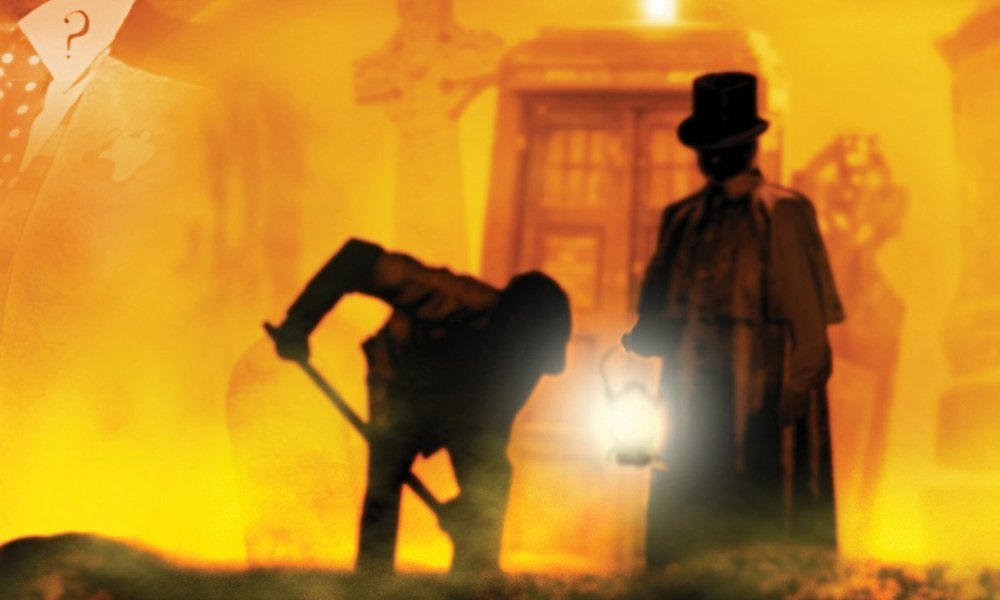 According to the liner notes, Robert Ross wanted to write a historical adventure that he could spin as a horror story. He choose Jack the Ripper, but everyone else vetoed that as overdone. So when the Doctor and Evelyn land unexpectedly in the dark, they’re not in 1888 London but 1828 West Port Scotland, where William Burke and William Hare (the audio calls them William and Billy) discovered that body snatching is much more lucrative when you can make all the corpses you want. To her horror, Evelyn discovers that the Doctor is relatively shameless in his urge to meet famous historical figures.

“You talk about Burke and Hare as if you’re looking forward to meeting them,” she protests. “But they’re criminals! Murderers!”

“Maybe not yet,” the Doctor defends. Or maybe not at all – people have been found dead all right, but they haven’t been used to advance medicine under the scalpel of Dr Knox. They’ve just been carted off by the baffled police. And more than that, Burke and Hare insist they don’t even know each other. Something’s gone wrong, and it’s up to the Doctor to get history back on track even if it means becoming an accessory to crime.

At release time, Sir Leslie Phillips was the most commercially famous name attached to the project, but if anyone at Big Finish had a crystal ball back in 2004, they wouldn’t have given David Tennant bottom billing. Phillips plays Dr. Knox, a man with more secrets than expected even for someone who was being supplied a series of still-warm corpses. Tennant plays Daft Jamie, one of the last Burke and Hare victims. History records Daft Jamie as being relatively popular and (with the benefit of modern hindsight) probably somewhat autistic. Here he’s a severely retarded outcast, and Tennant sounds convincingly like he’s about to dribble on himself. (Unfortunately, Medicinal Purposes was recorded before the launch of the CD Extras feature, so there is no interview with Tennant as himself, although the extremely completist fan will want to know that there are two small photos of him in the liner notes.)

People who aren’t buying it just for David Tennant will find that they have a solidly told story that fulfills Ross’s intent – it’s horrifying and it’s scary and it’s quite sad. But because it is a Who adventure, it also provides several extraterrestrial twists.