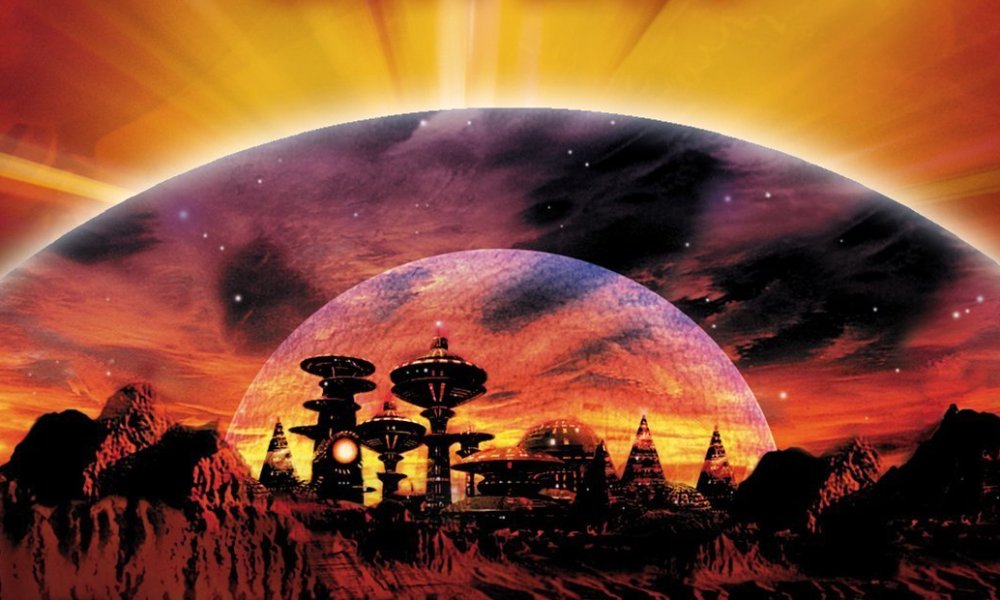 “T.A.I. shares are up 15% on news that the corporation’s Research and Development arm has hired galaxy-famous scientist Davros, controversial creator of the Daleks, and his long-time rival, the Gallifreyan inventor usually known as the Doctor, for work on unspecified technological projects.”

That one newscast, late in the first episode, sums up the plot quite neatly. Lorraine Baynes, a historian and Davros apologist, has found and resurrected her hero from a long suspended animation. Her husband Arnold, owner of TransAllied Inc., isn’t entirely sure that Davros is as great as Lorraine thinks, but he’ll hire anyone who can enlarge the bottom line of the galaxy’s biggest corporation.

That means not just Davros, but the Doctor as well. The Sixth Doctor has been called planetside by a reporter desperate to stop the rumored shutdown of all of T.A.I.’s mines, which would throw billions out of work. It’s not the sort of disaster the Doctor usually handles – but once he sees who the new recruit is, he’ll do anything and everything to stop Davros from getting any leverage, even if that means offering himself as a corporate research director in Davros’s place.

Interspersed with the T.A.I. story is a series of flashbacks to Davros’ own past, building the story of how an earnest young Kaled scientist became the universe’s most evil inventor. T.A.I. is offering a chance to erase that, to end famine. Will Davros take it? Is he even capable of using his talents for good?

Part of the villains series created as Big Finish’s celebration of Doctor Who‘s fortieth anniversary, Davros sees the reunion of many of the show’s actors – Colin Baker, Terry Molloy, Wendy Padbury, and Bernard Horsfall – although the latter two are not reprising their televised roles. The former Zoe and Chancellor Goth are now the venial Baynes couple. This audio also introduces Katarina Olsson. Here she’s playing Kaled scientist Shan, but she will become much more familiar years later as the Headhunter in the Eighth Doctor series.

But this isn’t just about the voice talent – they’ve been given a superb story to work with. In the liner notes, Parkin says “Davros is a fascinating character in his own right, and a worthy adversary for the Doctor even without an army of killer dustbins to do his dirty work”. He’s right. Even in a story that is, at heart, about corporate jockeying and stock market gambles, the addition of Davros turns it into terrifying discussion of ethics and morality. Add the backstory of how a young man could become the twisted thing in the chair, and you’ve got all the elements of a classic tragedy.

A fascinating and horrifying look at one man’s descent into evil and his reaction to redemption, Davros is a must-listen audio.