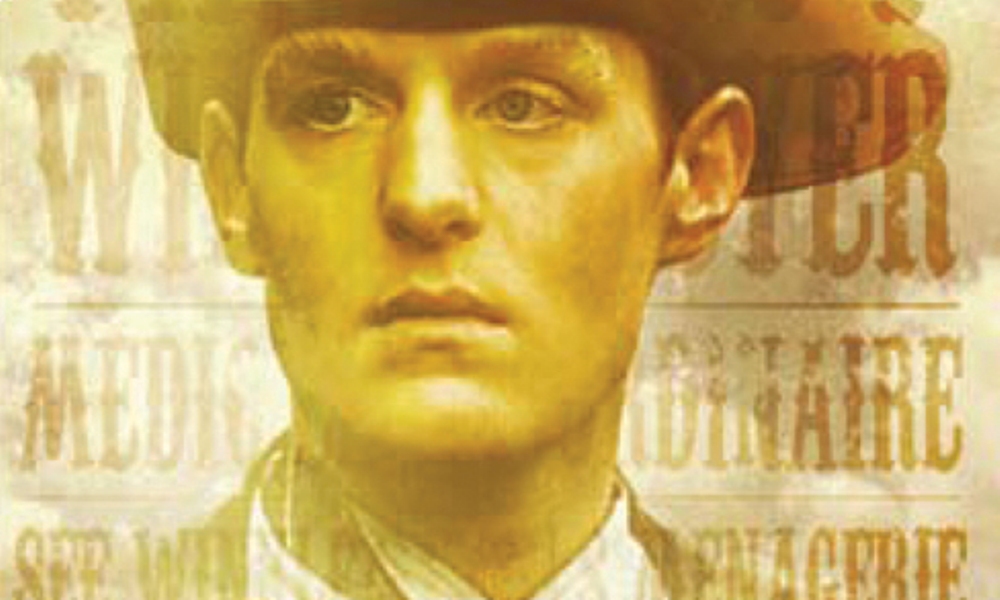 This year’s free Doctor Who Magazine audio, like last year’s, is a Companion Chronicle: Mark Morris’s Freakshow stars Mark Strickson as Vislor Turlough, in his second appearance in the range. This story has Turlough narrating an adventure he’s just experienced (for reasons never clearly explained) into some kind of evidence pod. Freakshow picks up just after the end of Enlightenment, with Turlough wanting to return home to Trion, and Tegan still not trustworthy of their new TARDIS-mate. The Doctor wants to take a circuitous route home, though, to avoid the Black Guardian, and so the TARDIS lands in 1905 in the American Old West – where Turlough promptly has a fight with Tegan and stomps off, eventually coming into contact with the mysterious and ruthless Winklemeyer.

As with Ringpullworld, the highlight of this release is definitely Mark Strickson’s performance. Though he’s obviously aged somewhat, he’s more than close enough to the Turlough of old, effortlessly recreating the role. His Davison gets the cadence spot on, and his Tegan is hilarious – it’s a shame that so much of Tegan’s dialogue is in reported speech and not direct address, because I want to hear more of it. Strickson works well with Turlough’s interiority, something we never got much of on television, though I think he sometimes comes across as a little bit too naive and not suspicious enough. Mind you, that’s obviously a writing quibble.

On one hand, the writing is above average for a Companion Chronicle: the prose in these is usually straightforward, so I never comment on it in my reviews unless it’s not very good, but Freakshow actually had some very evocative moments: Turlough’s long trek across the dry desert is gripping, but even better is the sequence where he encounters Winklemeyer’s freakshow for the first time. The exotic, alien members of the show are described to us one by one, and they really do captivate the imagination, the writing ably supported by Strickson’s performance and a touch of sound design.

On the other hand, when we find out what Winklemeyer is up to, it makes absolutely no sense. He’s touring the Old West with a collection of aliens that he tells everyone are just deformed humans, using them to sell an “elixir of life”: he gives them some to demonstrate it, and telepathically projects an image of them having been “healed” into everyone’s mind. Of course, the elixir of life is nothing of the sort, but one suspects there are ways of infecting a town with the stuff that doesn’t involve carting five aliens across the American countryside in wooden carts. The titular freakshow has nothing to do with his plan at all!

On the other other hand, I like the resolution to the story, even if Turlough recedes in importance at that point. It’s clever, and it involves some of the best sound design I’ve heard in a Companion Chronicle, other than the Sara Kingdom stories. Actually, the sound design is very good overall, aside from one quibble I’ll mention later.

On the other other other hand (okay, I’ll stop now), the clever resolution seems to be contingent on a cheat: a character’s powers being revealed to extend somewhat further than had previously been implied, and I thought implausibly so. But the story very nearly gets away with it, so I’ll overlook it.

The other performer in Freakshow is Toby Longworth as Winklemeyer, who performs the role exactly right: perhaps stereotypically, but also flamboyantly and with a touch of menace. And as Longworth usually does, he gets the accent spot on. It’s a shame Winklemeyer doesn’t have a little more to do: usually he’s giving speeches, and I think some more one-on-one interaction with Turlough would have served both characters well. I’m assuming it’s also Longworth doubling up as the other non-Turlough speaking role, and he does a surprisingly engaging job there, too. Though the sound design in that case makes the Wild Man of Borneo just a little too hard to understand at times.

Though not every aspect of the story is perfect, some strong performances, strong sound design, and evocative prose manage to raise Freakshow above the average Companion Chronicle. Well worth a listen, even if Tegan is right in pointing out that the villain dresses like Willy Wonka.