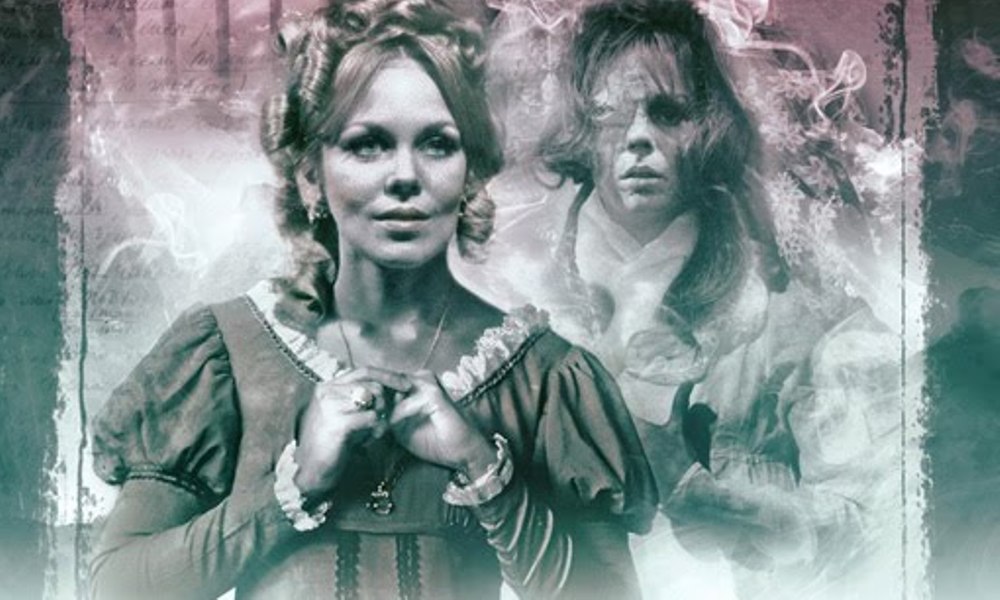 Big Finish’s Dark Shadows page plugs the range as “All new, full-cast audio dramas and talking-books”. In the case of Final Judgement, it’s the latter label that’s relevant, and all too apt – this audio contains almost nothing except talking. Since the talking is being done by Lara Parker and Kathryn Leigh Scott, it all has a certain charm, but the script by D. Lynn Smith takes an interesting idea – a confrontation between Josette and Angelique over their love triangle with Barnabas – and surrounds it with a tedious, repetitive scenario that will test the patience of all but the most devoted listeners. The opening is dramatic enough. In the afterlife, Angelique Collins is seized by fellow servants of the Dark Lord and taken to trial. Josette du Pres, Angelique’s former employer and once engaged to Angelique’s husband, infamous vampire Barnabas Collins, has made a deal with the Dark Lord. A jury of wronged women will consider whether Angelique has committed “crimes against true love” in working to keep Barnabas and Josette apart. If Angelique is found guilty, her soul will be forfeit, and Josette will be restored to love and beauty; if Angelique is acquitted, it is Josette who will pay the ultimate price. And the trial begins…

Listeners may be interested to discover that infernal trials are done largely on the modern American system, with a jury, a bailiff, and possibly objections. (At one point the Dark Lord, who is presiding as judge, replies “Overruled!” when Angelique objects; at another she’s told she can’t object at all.) The only difference appears to be that it’s permissible to act simultaneously as a prosecutor and a prosecution witness. It may seem that I focus on trivialities, but these are the thoughts that went through my mind as I listened to Final Judgement. There’s not much else to focus on, I’m afraid. The trial, which like any trial comes down to two people arguing, lasts to the very end. It starts with its most interesting material, as the early history of Angelique and Josette’s relationship covers ground that I don’t believe the television storyline touched on. The portrait of a young girl and her maid who may be as much sisters as servant and mistress isn’t the most innovative thing, but it adds some background to the characters. Once the trial gets to events at Collinwood that were shown on television, Angelique and Josette can only reiterate what fans already know, each offering defenses of their own conduct (“I only married Jeremiah because of the love spell you put on us!”). Every single action of Angelique’s is described by her as an act of love and by Josette as an act of spite. It’s like listening to two bratty schoolchildren: “You lie!” “Nuh-uh, you lie!”

The performers gamely gasp every time a decades-old plot point is brandished anew, and the music swells dramatically, but all this is old news. If the dialogue were sparkling, the repetition might be forgivable, but lines like “You are a vile sorceress!”, while in best Dark Shadows tradition, aren’t enough to justify sitting through rehashed material from the 1795 storyline. And when the verdict is finally handed down… I don’t want to give away the ending here, but to those who have heard the audio, I’d pose a further question: what was the point? Given what’s revealed in the final minute, why was this worth hearing at all? Even without getting into the ending, I would question the value of the trial structure. In a confrontation between Angelique and Josette, any Dark Shadows fan knows who’s good and who’s bad, and there’s only so much enjoyment that can be gotten listening to the bad one pretend to be good. I’m not the type to demand meaningful plot above all else, but Dark Shadows, like many soaps, works best when it tells a story that has some weight, and the final twist of this entry makes it feel like a lightweight diversion. Style can elevate something like this, but despite the typically-solid music and sound design by Nigel Fairs and entertaining performances by Parker and Scott, the audio never takes wing.

Parker and Scott do handle the material quite well, injecting as much drama as they can without going over the top, and they have lovely speaking voices. They certainly doesn’t sound forty years older. One problem is that the two sound more than a little alike. For about half a minute I assumed that one actress was handling both parts, and throughout the audio I had to strain to tell which was which, often relying more on dialogue context to help. It may just be that I’m bad with voices, and in any case there’s no easy way to solve such a problem, but it’s another aggravation in this often frustrating release. The Dark Lord is played by Nigel Fairs, who has little to do but manages his one big moment very capably.

I feel I may have been unduly harsh toward Final Judgement, but no matter how much I try I can’t find anything to mitigate my own final judgement. If you haven’t watched the 1795 storyline recently, or you don’t mind reliving it, this audio might be a worthwhile purchase, especially if you’re a fan of the characters or actresses involved. Other listeners are advised to give this one a miss, in the hope that future Dark Shadows releases will offer more in the way of action and plot. Even a soap opera can only string us along so much.