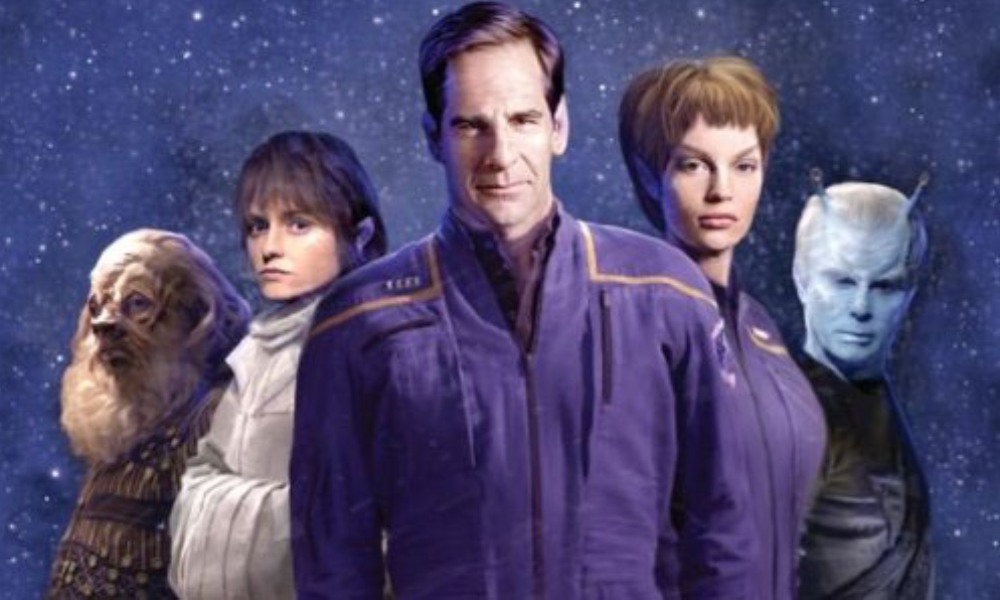 Beneath the Raptor’s Wing, the first novel chronicling the Earth-Romulan War, is written by Michael A. Martin and continues the ongoing post-series Star Trek: Enterprise storyline. While the Romulans get bolder in their attacks against the Coalition, the Vulcans have withdrawn their forces from the conflict, driving a large hole in the Coalition’s defenses. T’Pol, sent on a mission to Vulcan by Captain Archer to persuade T’Pau to change her mind, discovers that the Vulcans are probably helping the Romulans with more than just their inaction. Meanwhile, her lover Charles “Trip” Tucker has finished a successful mission to undermine the Romulan’s research, but when he meets T’Pol on Vulcan she finds out that his memories of the mission were altered.

Beneath the Raptor’s Wing is a definitive step up for the Enterprise novels after the abysmal Kobayashi Maru. But considering the (lack of) quality of that novel, this means that the first entry in the The Romulan War series is only mediocre. While the novel undoubtedly has some fine passages – oddly enough, mostly those which are not part of the core story, like the parts connected to the reporters – overall it doesn’t really seem to capture the historic scope of the event. That’s probably a result of Michael A. Martin trying to include too many different things in Beneath the Raptor’s Wing: beside the depiction of the beginning of the Romulan War, he also explains the apparent difference between Enterprise– and Original Series-era technology, explain the reason why it was called the Earth-Romulan War, and connect other little continuity tidbits. And of course there is the Trip spy stuff, and the obviously mandatory Trip-T’Pol love scene.

Like I said above, I really liked the scenes featuring the press, be it the actual news stories, scenes where Brooks meets people, or the scenes where her editor is meeting with Starfleet. Here Martin conveys the effects of the war beyond just our heroes’ scope very well and truth to be told, those parts are the main reason this novel isn’t sharing a similar fate rating-wise as Kobayashi Maru, since sadly most of the stuff related to the Enterprise and its (former) crew members is sub-par again. Martin just isn’t able to make me really care for them, and in some cases even makes me loathe them – Trip being the prime example for that. I have to admit I wasn’t the biggest Trip fan when the show was on air, but the Enterprise post-series novels have actually made me wish These Are the Voyages… had actually shown a dead, destroyed-beyond-repair body, so Margaret Clark, Andy Mangels, and Michael A. Martin would have had a harder task convincing CBS licensing to bring him back. But really, most crew members are pale cardboard cutout versions of what we have seen on TV, and so naturally most parts featuring them aren’t really able to capture the reader’s interest. The parts of the novel dealing with the Romulan side of the war fall somewhere in-between, quality wise – while they are definitely more interesting than the Coalition parts, they don’t quite reach the quality of the press parts.

The high fluctuation in quality in this novel is another reason why the whole thing doesn’t really feel like one coherent whole worthy of the Romulan War, but more like someone just collected stories from the war by different contributors. If that had been the intention, you could see it as a successful experiment, but since there’s no indication that it was planned out that way, The Romulan War: Beneath the Raptor’s Wing ends up as a somewhat schizophrenic novel. Very well-written scenes alternate with scenes you get headaches from reading, only to be followed by a really good one again. But if – and that’s a relatively big if – Martin gets his act together and is able to keep the high quality for whole novels, hope might not actually lost for the series, yet.

Beneath the Raptor’s Wing (by Michael A. Martin) was released by Pocket Books in November 2009.