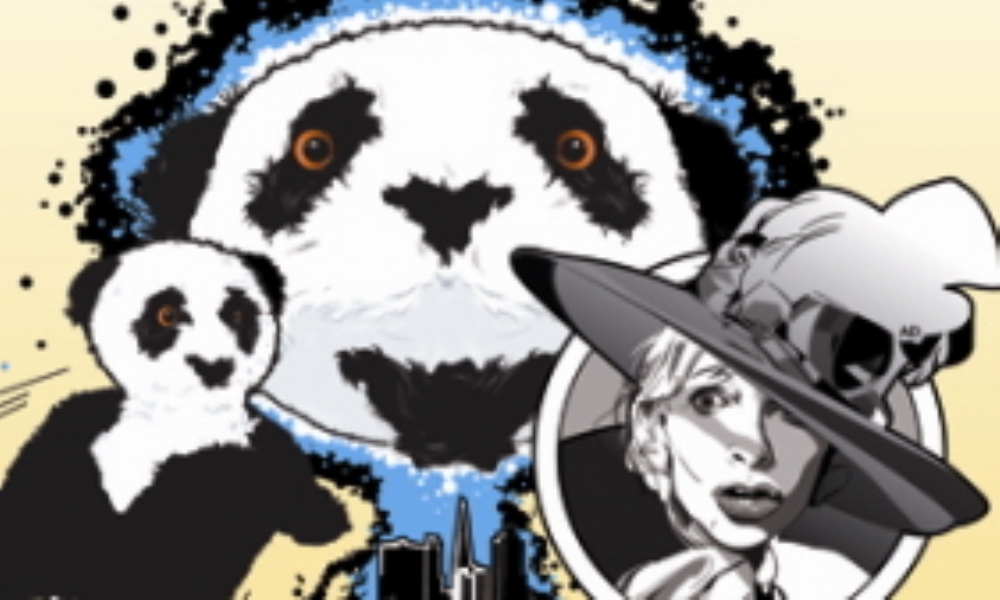 Panda’s birthday wish is to visit San Francisco on New Year’s Eve 1999. All well and good… at least until his nagging causes the flustered Iris Wildthyme to spill her G&T into the time vortex at the heart of the bus. And – gulp – no-one’s supposed to do that!

As a mysterious rift forms over the bus (now stuck on top of the Golden Gate Bridge), the unconscious Iris is rushed to a nearby hospital, where the hunky Dr George Strangeways puzzles over the x-rays clearly showing her two… livers. Meanwhile, Panda is stuck on the bus with his suave but sinister double from another dimension, Lionel Pandeau. Lionel wants the secret of the rift, and will stop at nothing to get it. The Panda Invasion has begun.

Penned by Mark Magrs, brother of Iris creator Paul Magrs, The Panda Invasion concludes the Series Two theme of replicating the feel of different eras of Doctor Who. This time, as you may have guessed, the author takes aim at the controversial 1996 TV Movie. In this respect, Mark Magrs may have had the easiest job of the season; there’s certainly no shortage of things to lampoon in Paul McGann’s sole televised outing.

Though not quite reaching the level of inspired insanity found in The Two Irises, The Panda Invasion is certainly good for a guffaw or three. There are only two major guest acting roles, and both are expertly cast. Sean Carlsen plays the handsome 30-something ER doctor, George Strangeways, who still lives at home with his mother. Caught between Iris’s not-so-subtle advances and a chain of inexplicable events which force him to re-evaluate his entire worldview, George spends most of the story in a state of advanced befuddlement accompanied by an appealing streak of sarcasm.

Toby Longworth gets a chance to trot out his “out-rag-eous French ac-cent” (a la Monty Python) as Panda’s nemesis, Lionel Pandeau – and he does so with obvious glee. The stylish Lionel’s disdain for his “country cousin” is palpable, and he and David Benson (the voice of Panda) play off each other well.

Katy Manning’s performance as Iris is bonkers as always (and would we have her any other way?). It takes a certain kind of actress to deliver some of the utterly mental lines found in the typical Iris Wildthyme script with complete conviction, and Katy Manning is definitely that kind of actress, thankfully for the listeners.

For those so inclined, the story also offers a great opportunity for a drinking game – it’s positively littered with blink-and-you’ll-miss-’em throwaway references to other sci-fi movies. So drag out the Bombay Sapphire (for Iris purists) and see how many you can catch.

All in all, The Panda Invasion is a strong finish for Series Two of the Iris audio adventures, and leads directly into the brilliant Christmas special, The Claws of Santa. It’s definitely worth a listen if you liked the Paul McGann movie… or if you hated it, for that matter. Either way, you’ll appreciate the humour.

Iris Wildthyme and the Panda Invasion (by Mark Magrs; starring Katy Manning) was released by Big Finish Productions in May 2009.