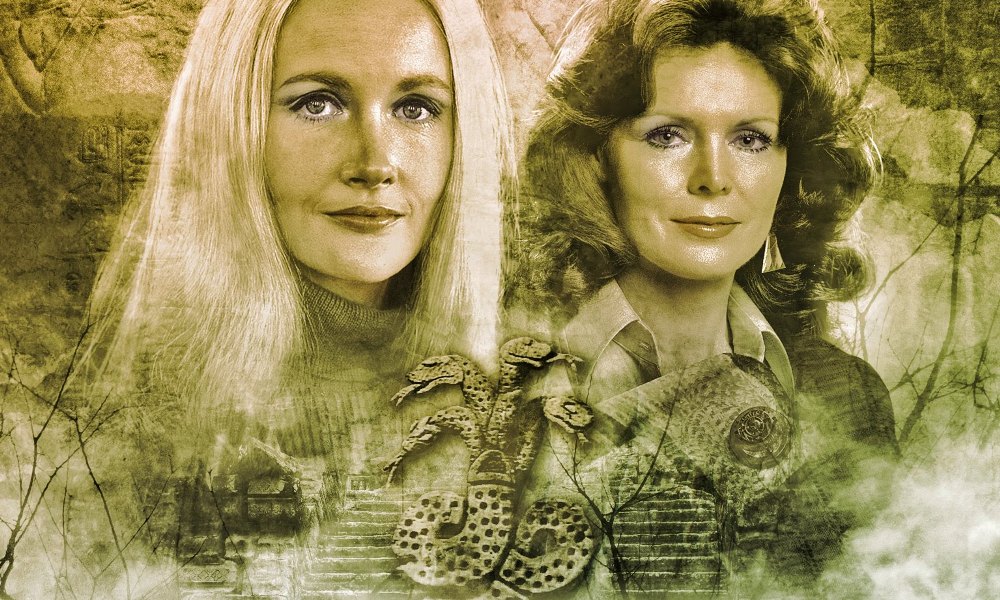 I don’t usually like it when reviewers make personal asides in their reviews, but in this case I feel obliged to make an exception. When reviewing earlier Dark Shadows audios, I had never seen an episode of the show, as I noted in those reviews. Since then, however, I’ve begun watching the show on DVD. The reason this matters to anyone other than future internet stalkers is that seeing the show has changed my approach to reviewing. In the past, with no way to judge the audios on their faithfulness to the show, I had to go by whether I was entertained by them as modern audio drama. Now I can give more weight to a question that is perhaps more pressing with stories for a fan audience: how Dark Shadows is it? In the case of the latest release this question is especially relevant. Curse of the Pharaoh is no great shakes in the novelty department, but as a return to Collinwood for the initiated it has a certain undeniable charm.

Carolyn Stoddard is shocked when Egyptologist Gretchen Warwick shows up on her doorstep, claiming that only Carolyn can help her with a discovery of tremendous importance. Her shock – and fear – only deepen as Gretchen reveals that her discovery is connected to the death of Carolyn’s husband. But can this strange woman be trusted? And what is the connection between that tragedy, Carolyn’s dreams of being a pharaoh’s wife in ancient Egypt, and a mysterious death in Collinsport?

As usual, the answers to these questions are as you’d expect, and will perhaps be more obvious to viewers who have seen the storyline they follow up on, which I haven’t yet. (Oh, the spoilers I have endured on your behalf, Unreality readers.) There’s something of a feel of ticking the boxes as the story progresses: mysterious arrival, ominous hints, partial exposition, ominous supernatural event, sudden death, further exposition, sign of treachery… But that’s part of the fun. The plot is nothing special, but the appeal of Dark Shadows does not rest in complicated or surprising plots. The dialogue and story development recapture the feel of Dark Shadows episodes while maintaining a pace appropriate to the 75-minute one-off story format. The Egyptian flashbacks don’t really lead anywhere or evoke the world in which they take place, and their plot is so simple that they feel gratuitous, but they’re brief enough that they don’t represent a real stumbling block.

Nancy Barrett’s performance is effective and brings some energy to the proceedings, recapturing Carolyn’s strong emotions and mood swings. However, it’s often obvious that she is now much older than the character she plays: there’s something distracting about hearing a woman in her sixties speaking the dialogue of an overwrought 20-something. Barrett also does a decent job of making the pharaoh’s wife sound different from Carolyn Stoddard, and brings a melodramatic bitterness to the role that makes the flashbacks less dull than they might be. As in the past, the decision to have other characters in these dramas played by the lead actor has awkward results: Barrett does well enough playing these bit characters, but it’s still obvious that she’s playing both sides of conversations, and the effect is a strange one. As Gretchen Warwick, Marie Wallace has little to do beyond sounding ominous and imperious, and she goes about it with relish, to great effect. As ever, Big Finish’s music and sound design are eminently enjoyable, though they don’t rise to quite the creepy effect they have in the past.

Perhaps it’s not even worth saying that an audio like this will be most successful for devoted fans of the TV series. Are there people who buy audios like this without being devoted fans? In any case, Curse of the Pharaoh is a solid nostalgia trip. It doesn’t quite reach the heights of the best Dark Shadows episodes, and it doesn’t have any grand ambitions as a drama, but as with the wobbly soap opera it’s based on, it does what it can do very well and its heart is in the right place, which is what matters.