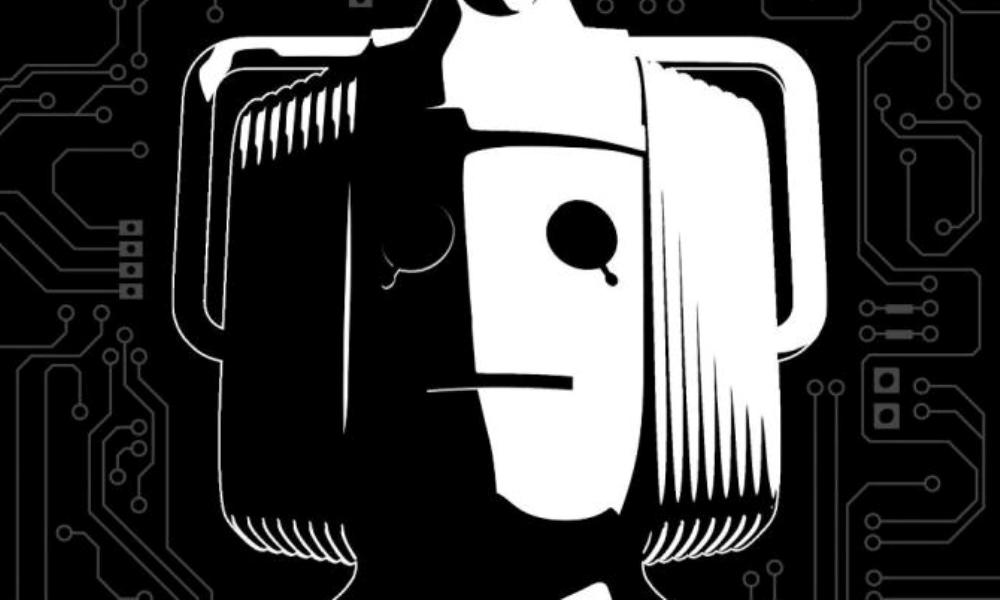 The Cybermen actually used to be my favourite Doctor Who monster, back when I was a teenager and didn’t want to like the Daleks because that was obvious. I got over that eventually – who doesn’t love the Daleks, after all? – but coming in second in the Doctor Who monster stakes isn’t exactly a bad deal, and the Cybermen add an important part to the Doctor Who mythos we don’t get elsewhere. There’s two things about the Cybermen that make them work. The first is that they are us, they are who we will be. They don’t even need to convert us; we will do it to ourselves, given enough time. The second is their utter emotionlessness and facelessness. One of my favourite Cyberman moments comes in (the otherwise execrable) Revenge of the Cybermen, when the Cyber-Leader intones in this dead monotone, “Cybermen do not subscribe to any theory of morality”. So chilling! And they subsume your identity in a way that the Borg can never dream of. Anyone can come back from being a Borg drone, and even if you can’t, people can tell who you were. Once you’re a Cyberman, you’re a Cyberman for life.

All of this is a long way of saying that I think the Cybermen themselves are the weak link in Cyberman 2, despite his professed love for them in the CD Extras. At one point, Samantha Thorn explains that the Cybermen extracted all of their emotions… aside from hate. But that’s not the Cybermen! They don’t even hate. It’s the Daleks who do that. I could forgive that as a character being mistaken, however, but it there are a few other bothersome moments, not the least the fact that human/android characters continue to be able to identify post-conversion Cybermen like they could in Telos in the first Cyberman series. That defeats the whole point of them! How much more chilling would those sequences have been if the voice that answered our heroes hadn’t been a computer-processed version of the original actors, but yet another Nicholas Briggs monotone? All individuality erased, subsumed, deleted.

Cyberman 2 is the long-delayed sequel to 2005’s Cyberman miniseries. In the time since the first one, Nicholas Briggs was promoted to producer of Big Finish’s main Doctor Who range, leaving him without the time to perform all the roles on Cyberman 2 that he did on the first one: writing, directing, sound design, music, Cyber voices. James Swallow took over writing duties after his work on 2008’s Kingdom of Silver, a Cyber-centric Doctor Who release that ties into this story in a small way. Cyberman 2 also has a slightly different format: instead of four monthly single-CD releases, we get one big boxset with four CDs in it (plus one CD of extras).

It’s a bit weird for one author to take over from another on something so tightly author-based. There’s niggly little differences: not contradictions, just things we’d never heard before, like terminology such as “Greater Britannica” and Sam’s need for recharging. But on a bigger scale, there’s differences, too: the tone is different. It’s a little less raw, a little more action/adventure, though very much still grim. The direct-audience-address monologues are still there, but there’s less of them. It’s more one big story than the original Cyberman was, which had a slightly different focus and style for each disc. None of these are complaints, mind you, just observations: Cyberman 2 is a different story and rightly so.

Cyberman 2 picks up six months after the conclusion of the original series. Samantha Thorn, android secret agent, and Liam Barnaby, former supreme commander of Earth’s military, have been trapped together on an android warship restricted to sublight that whole time. Paul Hunt has assumed supreme executive authority over the Earth Empire and is continuing his furthering of the Cyberman agenda on Earth. And Hazel Trahn – a new character for this new story – is a taxi driver on Earth chafing under the new restrictions. The stories of these four characters weave in and out of each other in turn.

Liam’s story was probably my favourite, and listening to Swallow on the extras, I can tell why; he’s very enthusiastic about it. Trying to make his way back to Earth to warn them about the Cybermen, he and Samantha are picked up by the Novograd, an Earth freighter commandeered for the military by Captain Louis Richter. Sam escapes early on, but Liam is left on board with two poorly integrated crews and an increasingly paranoid captain. Like Swallow, this is one of my favourite kinds of stories: officers in desperate circumstances trying to figure out what to do. It reminded me (in a good way) of C. S. Forester’s Lieutenant Hornblower. Mark McDonnell (thank goodness this series has cast credits!) puts in his usual strong performance as Barnaby here, showcasing a man likeable, determined, and conflicted. Toby Hadoke puts in a good turn as well, as Captain Richter, though I thought he could have been a little more effective if he was a little less psychotic and a little more genuine: he did have good reasons for his paranoia, after all! The only downside to this plot is that there’s some who’s-the-traitor stuff that’s pretty obvious given there are only two real suspects, only one of which has actually done anything suspicious.

New character Hazel Trahn, played by Jo Castleton, I found somewhat generic: she was a little too sassy, determined “everywoman”. There’s supposed to be a progression in her character from one end of the story to the other, but we don’t really see it; she’s just all of a sudden different. Her story is about her involvement with the Underground on Earth, the movement that resents Paul Hunt’s increasing control of the planet. Maybe if we’d seen more of her doing things with the Underground to show this transition? Despite playing multiple characters who were all killed in the first series, Ian Brooker returns here, now playing Yan, Hazel’s boss at the taxi company: his accent was pretty distracting. The best material in this story came in the Underground raid on the Cyber base, and their big plan at the end.

Samantha Thorn kind of vectors from Liam’s plot to Hazel’s, which works to create a nice sense of scale and interconnectedness. Hannah Smith continues to put in a dependable performance as the conflicted android agent, changed by her experiences in the first series. I question the notion that she fell in love with Liam (or vice versa), but I suppose six long, lonely months passed between the two series. Some of her can-an-android-love? ruminations are a little cliched, however, and she made a few too many errors for a supposed deep cover agent. But her action-packed continuous escapes were good (though since when is an android strong enough to split over a Cyberman?), and I liked the relationship she built with Hazel, as well as the one she continues with Barnaby.

Finally, I felt the Paul Hunt plotline was perhaps the least successful. The first series, especially Conversion, had set up the notion that Hunt’s initial cyber-control procedure had failed, and he’d had to have it redone, and I was hoping to see more of that conflicted man here. Hunt is conflicted in Cyberman 2, but mostly just in terms of his emotional control: he gets more and more erratic as the series goes on. Fortunately, Barnaby Edwards is an accomplished actor, and he adds enough to the part to make it work, though I never felt as sorry for the character as I had during the first series (with the exception of one key moment: ouch!). Jess Robinson plays his assistant Janice Webb, whose flat and nasal American accent kept her pretty unexpressive.

Naturally, all these plotlines converge on the fourth disc, with explosive results. I really liked how they were brought together, and the final battle is particularly well done (though I wish the Cybermen did a little less killing and a little more converting, as the latter is always more painful). Some aspects of the ending bothered me, but the final narration segment was able to sell me on it despite that.

Really, the only big problem I have with the story is the Cybermen. Aside from the problems I listed above, they’re just not active enough. Their plan is pretty passive, and they do a lot of reacting. I wanted to see them take charge. The Cyber-Planner seems to take a bit too much advice from its human advisors, too: this thing should be the smartest brain around. But as you might imagine, Nicholas Briggs’s usually strong Cyber voices shine through. They’re almost as much fun as Dalek voices!

The one other spot where Briggs remains in control here is in directing, though he’s assisted by the legendary Ken Bentley. Cyberman 2 isn’t quite as a raw and real as the first Cyberman, but it still has a real sense of foreboding where needed, and a strong sense of energy in other spots. A usually dependable job.

Sound design is taken over by Kelly Ellis and Steve McNichol, who do a fantastic job. An sf story like this needs a lot to sell it, and they don’t fail to deliver (though some of the action sequences in part four were a bit muddled). Their music was also good: thumping and ominous in equal turns, especially the opening theme, which was stuck in my head for days! (I miss the voice intoning “Cyberman” though, but I do appreciate the small quote from the Sword of Orion theme.) I also liked how each instalment had its own version of the ending theme. Excellent replacements for Briggs.

Cyberman 2 was not quite as a good as the first series, but it set a high bar. James Swallow is more than successful, however, in carrying out the desperate tone that made the first one work so well. These are people pushed to the edge and down to the wire, doing what has to be done. I love that, and I love a good bit of space opera. Cyberman 2 delivers on all accounts – even if I think my beloved Cybermen haven’t quite had their due! The ending is definitely a conclusion, but there’s also a space for a Cyberman 3, and I’d certainly listen to that.

(The extras on this release comprise a whole fifth disc, featuring Nicholas Briggs in conversation with a variety of people: James Swallow, Toby Hadoke, Ian Brooker (twice), Hannah Smith (twice), Barnaby Edwards, Jo Castleton, and Ken Bentley. They’re fun extras; I think Big Finish tend to do well by the conversation format instead of the direct interview in general. We get a lot of insight especially into what Briggs and Swallow were thinking, and it’s also good to hear the actors discuss the different ways the two series were recorded. There’s even some good jokes. They could have done with a bit of a trim, though, as sometimes we get the same information in multiple conversations.)