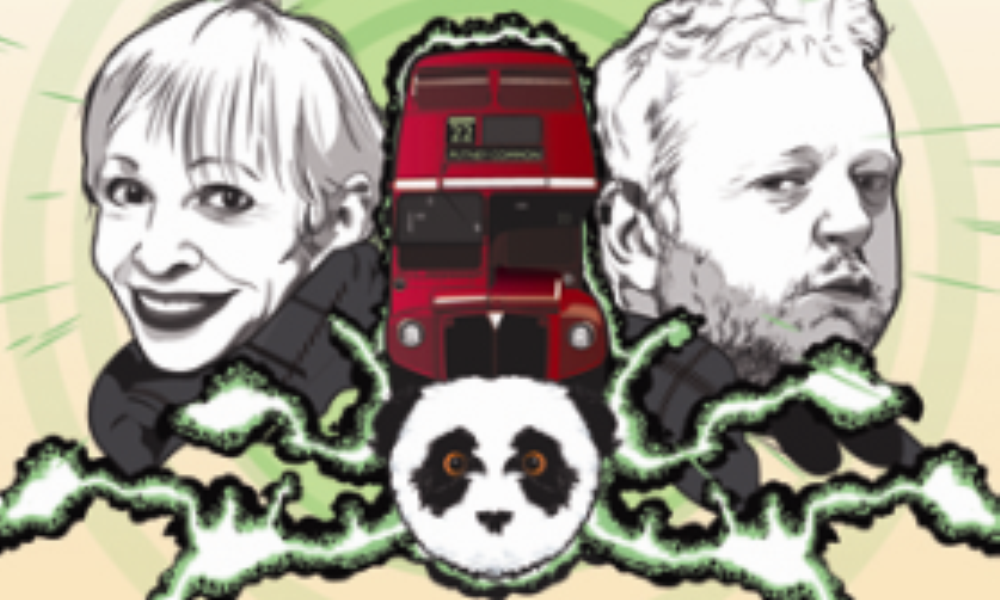 Never one to keep her public in the dark, Iris Wildthyme is holding a press conference to announce her upcoming regeneration. Sure enough, after yet another life-threatening scrape, there is only enough bat’s milk cheesecake to save Panda from succumbing to a deadly plague, and the Iris we all know and love disappears in a blaze of light and sound, only to be replaced by her successor.

Only one problem. The new Iris Hilary (?!) Wildthyme… is a fella. Worse yet, at least in Panda’s eyes, he sounds like a walking, talking self-help book and has a penchant for (shudder) healthy living – even going so far as to pour out the bus’s stash of alcohol. Horrors! Before things can come to blows, however, the duo are thrown into a dangerous showdown between the North Bloc and South Bloc in the year 2018, and the only thing standing between the Earth and a nuclear holocaust is a seedy disco in Malaga run by a lovestruck Naxian refugee. Specifically, Roger the Naxian – the third Naxian on the left from The Sound of Fear.

The Two Irises, as you may have guessed at this point, shamelessly tackles several of the sacred cows associated with regeneration in the Doctor Who universe. Happily, this results in the sort of hilarity that causes you to half cover your face in embarrassment as you laugh like a drunken hyena.

The top purveyor of hilarity has to be the new Iris, Dan Hogarth, particularly when he’s interacting with David Benson’s Panda. Never have two comic straight men – well, okay, one straight man and one straight panda – been so funny together. The Odd Couple do space and time travel; Men are from Mars, Pandas are from Venus.

But that’s not the end of it. From the play’s title, you’ve probably figured out that there is more going on in The Two Irises than first meets the ear, and you’d be right. The big reveal will have you groaning… but in a good way. And as the action heats up and the nuclear missiles start flying, even jaded listeners will begin to wonder if two Irises are going to be enough.

There’s only one way to find out, of course, and if you’re an Iris fan, it’s well worth your time and money to do so – if only to find out if Roger the Naxian (third one from the left) will get to live his dream with Iris – either Iris.

All in all, The Two Irises is another bit of inspired madness, and gets two thumbs up from this reviewer.