Iris Wildthyme and the Claws of Santa review 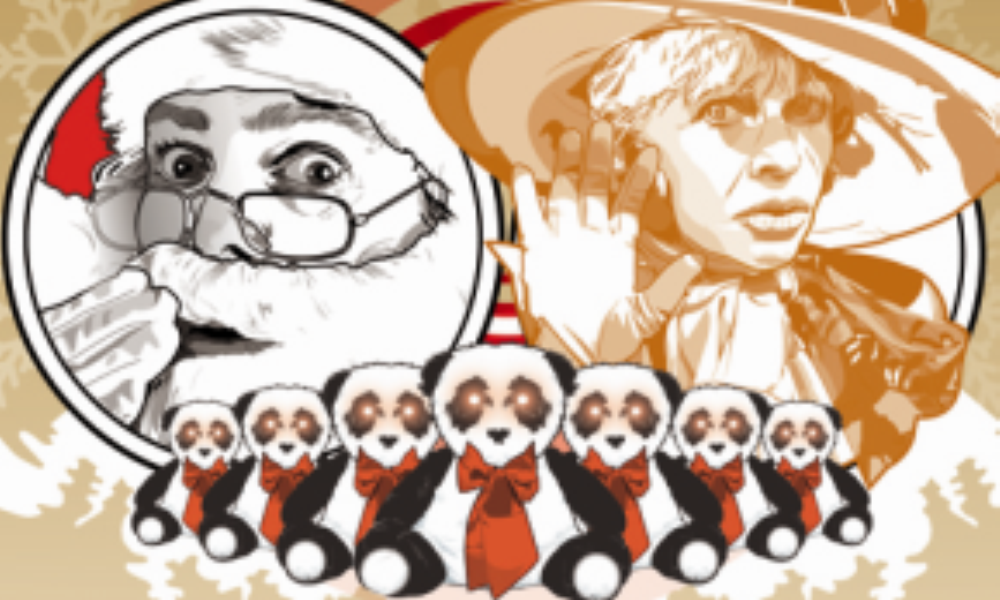 There’s no doubt about it – listening to an Iris Wildthyme adventure is cheaper than getting stinking drunk on spiked eggnog, and the hangover afterwards isn’t nearly as bad.

If you’re the sort of person who insists on a carefully constructed, logical plot, and who frequently engages in protracted debates over obscure points of Doctor Who canon, then please, please, do not buy Iris Wildthyme and the Claws of Santa. If, on the other hand, you are of a certain age and yet have absolutely no memory of the sixties, then The Claws of Santa is for you.

The story so far: after her companion Panda is abducted and lost somewhere in time and space, Iris is facing a blue Christmas… one which she hopes to drown in the bottom of a bottle of Babycham. But why does the year’s hottest toy look and sound exactly like Panda? And why is it trying to kill her?

A brief glimpse at the cast list will give you a better idea of what you’re getting into with this story. Conrad Westmaas (yes, that Conrad Westmaas) plays a security robot with a very silly accent; Peter Sowerbutts plays Santa Claus; Sarah Douglas plays Mary (Mrs Claus… Mary Christmas, get it?); and Scott Handcock plays the unhinged evil elf, Alfredo. Just be aware that after listening to Iris Wildthyme and the Claws of Santa, you’re going to know way, way more than you want to about what goes on in the Claus’s bedroom… and the back seat of the sleigh. Translation: don’t let your kids listen to this audio. They’ll be scarred for life.

The story is so bizarre that the word “bizarre” doesn’t seem to cover it, really. The acting is intentionally over the top. There are bits of dialogue that are so blatantly expository that it’s painful. And yet, you can’t hate it. In fact, if you can keep yourself from cackling uncontrollably through parts of it, you’re a stronger person than this reviewer.

Iris Wildthyme and the Claws of Santa is, basically, the perfect stocking stuffer for people who hate Christmas. There’s nothing like a hefty dose of cynicism, insanity, and shameless meta to inject a bit of cheer into an otherwise horrible time of year, after all. Plus, you get to hear Katy Manning’s rendition of the Third Doctor’s Venusian lullaby.

What’s not to love?

Iris Wildthyme and the Claws of Santa (by Cavan Scott, Mark Wright; starring Katy Manning) will be released by Big Finish Productions in December 2009.