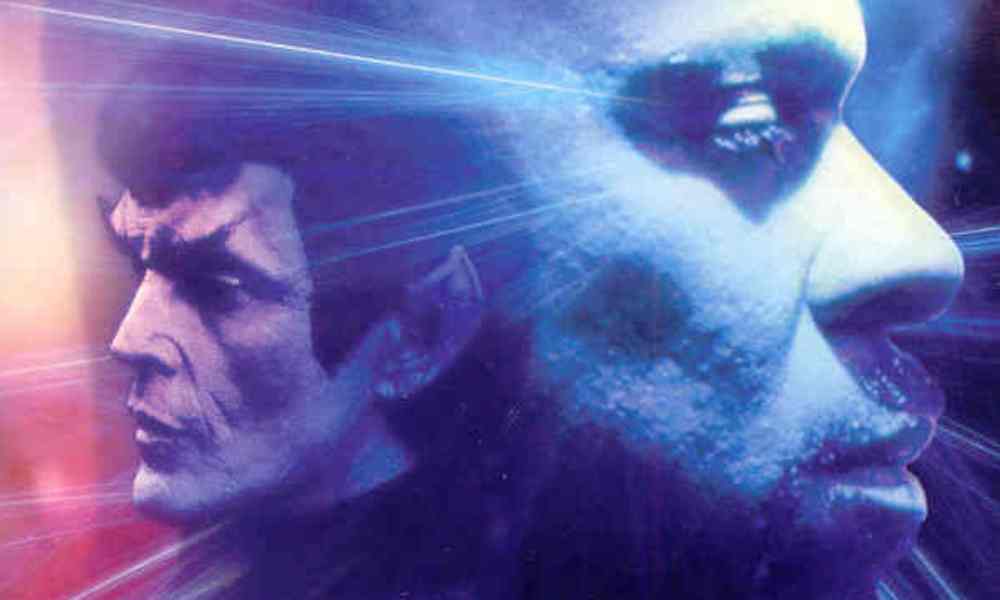 When you think about Cardassia in Star Trek literature, one of the first names that comes to mind is Una McCormack. In several stories – Face Value in Prophecy and Change, The Lotus Flower in Worlds of Deep Space Nine, and Hollow Men – she helped to shape the novels’ current vision of Cardassia in general, or individual Cardassians like Garak.

Recently, her newest novel The Never-Ending Sacrifice was released. “The book is a Bildungsroman, a coming-of-age story,” explains Una, who has kindly agreed to talk with Unreality SF about the book, and more. “It follows the character Rugal, whom we met in the second-season episode Cardassians, after he leaves for Cardassia at the end of that episode. It’s about his struggles to come to terms with that huge and unwanted change in his life, while Cardassia collapses around him.”

Besides Rugal, the novel is mainly carried by three other Cardassians. “The chief supporting characters are Rugal’s biological father, Kotan Pa’Dar, whom we also meet in that episode, his girlfriend Penelya, and his grandmother Geleth, both of whom original characters. Various other people – familiar and new – pop up here and there throughout the book, but those four are at its heart.”

Although the idea for a follow-up to Cardassians came from someone else, Una quickly engaged with the project. “[The Never-Ending Sacrifice] was Marco Palmieri’s idea,” she recalls. “He rang me up and said, ‘I think you should do a book about the boy from Cardassians…’ and I said, ‘My God, yes, you’re right, I should’. The outline took no time to write; it was as if the story had been waiting for me.”

The Never-Ending Sacrifice was released back-to-back with its fellow Deep Space Nine novel, Olivia Woods’s The Soul Key, but the two are largely unconnected. “It’s a standalone novel,” Una nods, “although it should be consistent with details established by the post-finale stories. I’ve not been in touch with Olivia Woods, other than reading Fearful Symmetry for background on the Ghemor family and the Cardassian setting.”

And she’s covered a chunky piece of that history, since The Never-Ending Sacrifice spans several years. “It runs from 2370 to 2378,” Una explains, “from the episode Cardassians to just after Bajor’s admission to the Federation, established in [the novel] Unity. Covering so much time and possibilities was one the most enjoyable and satisfying aspects of the book. Writing dialogue is my favourite part.

“I came up with a three-part structure,” she continues, “and tried to spread the action fairly evenly between those parts. I drew up a timeline of events in Rugal’s life, and put the main events of Cardassian history alongside that. That’s often a good way of generating plot points. When it came to the actual selection of material, I kept the dramatic focus relatively tightly upon Rugal and, when I needed to convey large chunks of Cardassian history, I switched to narrative rather than trying to dramatise all the events. That wouldn’t have been possible in a 100k novel!”

So far, Una has focussed on Deep Space Nine with her Star Trek fiction. Is she interested in writing for other parts of the Star Trek universe? “I suspect I’d enjoy writing TNG,” she ponders, but admits that she “often find[s] it difficult to take big organisations seriously – other than in their effects – and that’s possibly a handicap if writing about Starfleet or the Federation!” There is, however, one specific story related to Starfleet that she might be interested in writing. “I might enjoy writing about a Cardassian at the Academy, although I’m not sure s/he would graduate!”

So, even when writing about the Federation, Una would probably choose to involve the Cardassians. What draws her to the Cardassian people and their culture, and what motivated her to help shape huge parts of the novels’ current depiction of the planet? “Cardassia provides a good backdrop against which to explore one of my favourite themes: the relationship of the individual to society,” Una explains. “Cardassia obviously leans towards the authoritarian, and I am interested in how people survive in such circumstances, how they find the space for freedom.” She adds that “Cardassia is also a good setting to explore a related theme: what happens to those people who don’t fit into a society’s norms? For me, one of the measures of a ‘good’ society is its ability not just to accommodate but actively to nurture its most marginal people. Cardassia in The Never-Ending Sacrifice is not very good at this.

“The Cardassians that we see on DS9 are intelligent and cultured people,” she muses, “and I think this makes their nation’s trajectory in the programme very compelling: how does this civilisation end up on a path that almost leads to its destruction? Did it drive out everyone like Natima Lang? Were people too afraid to speak out against what was happening, or did they not see what was happening until too late? We see glimpses of this in the programme, but The Never-Ending Sacrifice gave me the chance to explore these issues in more detail.”

One part of Cardassian history she would like to write more about lies in the beyond the finale of Deep Space Nine. “Given the opportunity, I’d like to write more about the politics of the Cardassian post-war reconstruction, about the battles that are taking place for Cardassia’s soul. There’s some of this in The Lotus Flower, but I’d like to take it further, perhaps going beyond the mainly domestic focus of The Lotus Flower.”

The line of Star Trek books is in a time of change right now. For one, next year will see the first four novels set in the timeline created by this year’s blockbuster Star Trek movie by J.J. Abrams, a movie Una enjoyed despite some flaws she saw. “I thoroughly enjoyed the movie. I thought it was big-hearted, exciting, and fun. My chief complaint would be that female characters were thin on the ground, and it’s a shame that the producers didn’t try casting a woman in one of the main roles, the way that the re-imagined BSG did with Starbuck. Given that most mainstream productions are pretty bad at this, I’ll forgive the new movie on this score because it was so charming. Would I like to write for the new timeline? Could be fun!”

Another cause for upheaval in the world of Trek books was the recent departure of Star Trek editor Margaret Clark, who was also involved in parts of the production process of The Never-Ending Sacrifice, after she inherited the editorial duties from Marco Palmieri who was also laid off. “I’m very dismayed for Margaret and I hope she finds something very quickly,” Una sympathises. “She took on editing The Never-Ending Sacrifice right at the end of the process, and she was hugely enthusiastic and supportive. I’m very grateful to her for that, and I would have loved the chance to work with her on a project from start to finish.”

Unlike many of her fellow Star Trek authors, Una lives in Britain, and Star Trek fiction publisher Pocket Books is an American company. Especially in light of the current uncertainties involving the editorial future of the Star Trek book line, it would be interesting to know how her location affects her relationship to her American publisher… “With email, phone, and only five hours’ time difference, there aren’t really any practical difficulties,” says Una. “My partner has spent extended periods of time working in the US, and I’ve also spent time out there myself, so it doesn’t pose any particular cultural differences either. People in the US are invariably friendly when they hear a British accent.”

Amusingly, in her only foray into Doctor Who fiction (the short story The Slave War in the Short Trips: The Quality of Leadership anthology), she worked with an American editor, despite writing for a British publisher about a British series. In her story, she takes the Second Doctor and his companions into the Spartacus era. “My interest in Spartacus came first,” she reveals. “[It’s] a convergence between my long-term interest in rebels, and a new fascination with Roman society stimulated by, um, watching Rome. When I heard that [editor] Keith DeCandido was doing an anthology on the subject of leadership, I thought the Spartacus story would suit that theme very well: on the rebels’ side, leadership is through inspiration, while on the Roman side leadership is through coercion.”

Using the Second Doctor was a decision based on the setting and the mix of stories in the anthology. “I decided that I’d like to write a straight ‘historical’ – one without any science-fictional element other than the TARDIS crew –  and, because I wanted to evoke those stories, that narrowed the field down to the First and Second Doctors. My memory is slightly hazy now, but I think I may have settled on the Second Doctor because that better suited the mix of stories that Keith already had for the anthology. But I think I would have preferred to write for [actor Patrick] Troughton’s Doctor anyway.”

The Short Trips anthologies have been discontinued in the interim – a decision which disappoints Una. “I would have loved to have written more,” she admits. “The Doctors I would have liked to write for most are Six and Seven. I think I’d enjoy writing bickering dialogue for the Sixth Doctor and Peri, and the Seventh Doctor and Ace had a fascinating relationship: he is almost entirely calculation while she is almost entirely instinct.”

At the moment, no tie-in projects are on her plate, so Una uses her writing time for other projects. “I’m writing more ‘original’ fiction these days, mostly short stories, so if anybody would like to check those out, please do! You’ll be supporting some wonderful small presses, like NewCon Press. You can find details on my website, UnaMcCormack.com.”

She’s also widening her writing horizon by trying out another genre. “So far I’ve written mostly science-fiction, although next year I’ll be publishing a short story in a crime anthology: The Red Hand of Crime: the Irish Mythology Anthology, published by Morrigan Books. I’m also plugging away at a couple of novels. But who isn’t?”

While she isn’t working on anything Star Trek-related right now, one can only hope that she’ll be back soon. Cardassia just wouldn’t be the same without her.