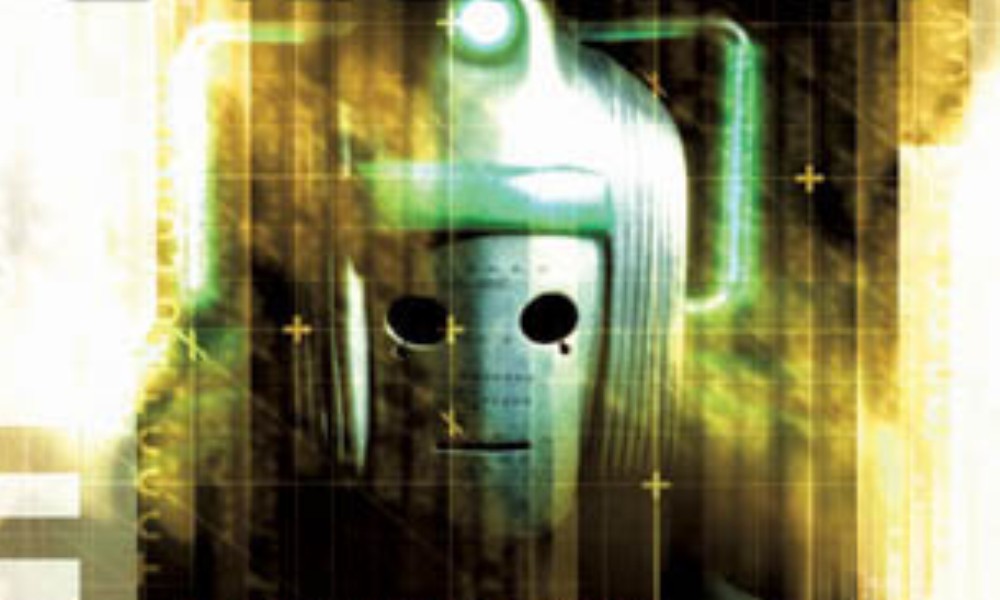 Conversion is, as you might imagine, about conversion. Not Cyber-conversion, but conversion – a change of sides, viewpoints, or perspectives. Like Fear below it, it doesn’t open by directly continuing from the previous story’s cliffhanger, but instead of jumping ahead even more, it actually jumps backwards. Some of the questions I had after listening to Scorpius and Fear are answered, and I went from despising Paul Hunt to feeling quite sorry for him; Barnaby Edwards’s performance does a lot in a small space here.

We eventually do pick up from Fear’s cliffhanger, and unfortunately I think the way it was resolved was a bit lame. The end of Fear was so chilling, that to find out that the conversion process was seemingly randomly stopped partway through is rather disappointing. But what we get here is a subtly different story than what we’ve gotten previously in the Cyberman series: interstellar political intrigue in Scorpius, a paranoia thriller in Fear, and now a tight action story as Barnaby and Samantha work to escape from the clutches of the Cybermen. And it works. The Daleks have their screeching hate, but what I’ve always liked about the Cybermen (and I have always liked the Cybermen, ever since I first encountered them in Sword of Orion) is their sense of seeming inevitability. They don’t gloat, they just come, and there’s nothing you can do about. You see, someday you too will become a Cyberman. And this feeling pervades the sequences with our protagonists trying to escape their fate. There’s nothing they can do. Briggs and the actors bring this all to life in a very real way. I very nearly forgave them for the poor cliffhanger resolution.

You see, Barnaby isn’t quite sure who he is in this story, as the Cyber ideology (“you have nothing to fear”) works its way through his system. So Samantha has to reawaken his human side… to convert him to her cause… but is this any better than what the Cybermen are doing to him? Barnaby isn’t given any more choice by Samantha than by the Cybermen as she works on him. She just assumes that it’s what he wants (and maybe he does want it on some level), but the Cybermen make that same assumption about us, too. It’s a sharp parallel, made all the better by how understated it is. Though I can’t decide if the way Samantha works to convince Barnaby is a brilliant disconcerting moment, or simply the setup for a really bad porno.

Interwoven with this is some more material with Paul Hunt and Karen Brett. We fill in the past some more, as we see how Karen went from dedicated Earth Alliance president to tool of the Cybermen – more conversion. And in the present, we see the Cybermen finally put their plan into action. I know I always praise Nick Briggs’s sound design in these plays, but it’s often vague and generic praise. This time, though, I have a specific moment: President Brett’s big speech, the Cybermen landing on Earth, Big Ben tolling in the background as a baby cries, and then a Cyberman speaks: “You have nothing to fear”. I had chills. Genuinely unsettling and amazing at the same time.

The acting is good as ever here. I’ve already praised Barnaby Edwards as Paul Hunt, and the actors playing Captain Barnaby and Samantha are also great in their roles, delivering some very intense, very real scenes. And whoever played the comedy android doctor was just fun. (Come on, Big Finish, I appreciate the whole “secrecy” thing, but give us some cast lists!)

Lest it sound like I’ve descended into pure Nick Briggs fanboyism (though it’s probably too late), Conversion is hardly an unremitting sea of awesome. Amid the well-developed characters, Prime Reorden of the androids stands out sharply as someone less than interesting. Samantha’s lover, a stuffy leader, and not much else. There’s an attempt to do some stuff with him and Samantha (more conversion), but it fell pretty flat for me. And Karen Brett is sorely underutilised here after how good she was at the centre of Scorpius. Maybe this trend will be reversed in Telos, but given the events of this story, I doubt it. And I found the ostensible climax of the story a little too action-y and uninteresting. Lots of people (and androids and Cybermen) shouting and shooting.

Perhaps my biggest problem is now that we’re finally coming to see what the Cyberman plan is, it doesn’t make a whole lot of sense. Why did the Cybermen need to work on behalf of the Earth Alliance in the Orion Wars? Why did they send a ship full of half-converted refugees into space? Why is it a risk to accelerate their invasion plans, given how secure their position already is? And why have they waited until this point in the story to make their Big Move? It seems like something they could have done from the beginning of Scorpius.

All of these questions add up to make up something a bit less satisfying than Fear, but that’s hardly the worst you could say. Not great, just very good. And I’m really looking forward to Telos, both because it might address my misgivings, and because it ought to bring the events of the Cyberman series to a suitably excellent conclusion.

Conversion (by Nicholas Briggs) was released by Big Finish Productions in November 2005.