The Scarifyers: For King and Country review 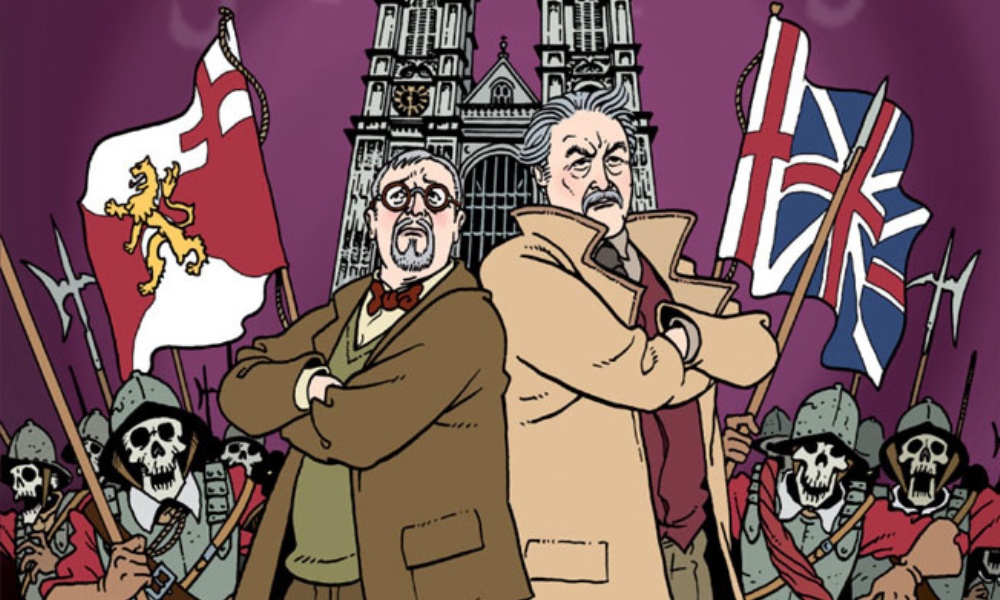 Lionheart: “I didn’t mean to.”

Inspector Lionheart (retired) and Professor Edward Dunning, the two chief members of MI-13, find themselves faced with a reanimated Matthew Hopkins, Witchfinder General to the English Parliament during the English Civil War, a reanimated Oliver Cromwell, Lord Protector of England during the aforementioned War (and Hopkins’ nominal boss), and a bunch of animated skeletons who are hell bent on destroying the Crown.

The Scarifyers: For King and Country leaps straight into the action with Lionheart and Dunning joining the self-proclaimed Ghost Detective, “Sir” Harry Price, in investigating what is supposedly the most haunted house in England, Borley Rectory. Returning to London having found his claims to be false, Lionheart spots some strange graffiti which oddly, is written in seventeenth century English, and makes mention of “Sir” Harry Price – and so our intrepid heroes are off in search of Price, in an attempt to discover just what his Price Ghost Captivator™ caught when he tried to capture the Stour Banshee.

Nicholas Courtney and Terry Molloy are in fine fettle as Lionheart and Dunning: the pair sound like old friends by this point, which is just what you’d expect given the number of scrapes into which they’ve got themselves in between their recorded adventures (some of which scrapes are briefly referenced).

Scarifyers regular Gabriel Woolf is superbly menacing as both Matthew Hopkins and Inspector Natterjack, while David Benson (another regular) voices Harry Price, Professor Penfold and Oliver Cromwell. Both men have the knack of making each character they play sound slightly different and although it seems as if it must have been slightly muddling for them when one character “possesses” another’s body, they manage to keep the voices straight.

What particularly interested me about this story is that the writers, Simon Barnard and Paul Morris, have not only brought to life Hopkins and Cromwell, but also “Sir” Harry Price, who was a well known “psychic” in the 1930s, and whom a number of quite eminent people firmly believed to be a genuine scientist (largely because of his habit of wearing a white coat, apparently!).

The story culminates in an incredibly well-presented swordfight in Westminster Abbey just before George VI is due to be crowned as the new King of England, and was a fittingly amusing climax to the story.

For King and Country (by Simon Barnard, Paul Morris; starring Nicholas Courtney, Terry Molloy) was released by Cosmic Hobo in May 2008.