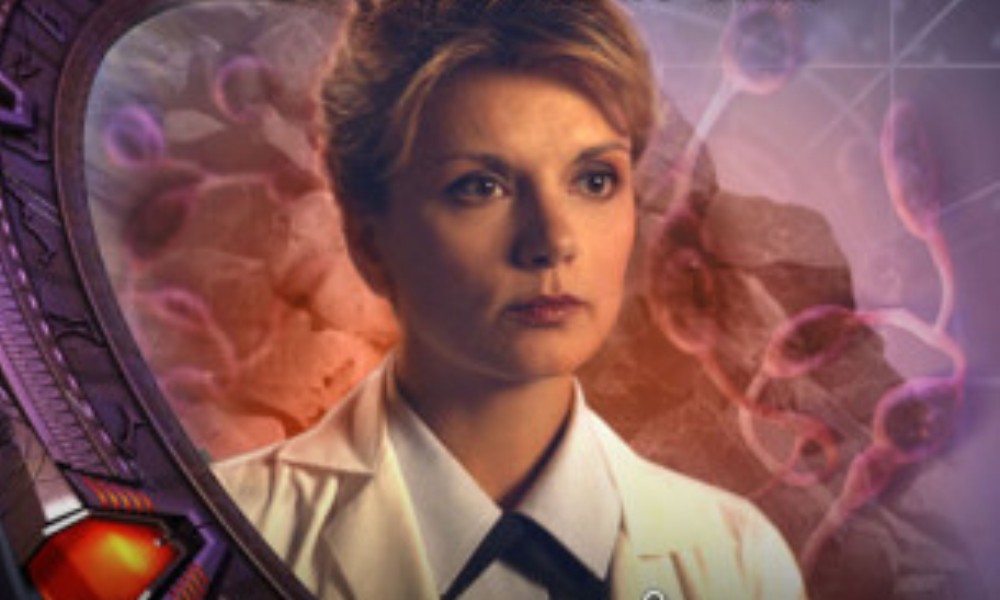 Pathogen is the second of Big Finish’s Stargate SG-1 audio dramas read by Teryl Rothery, in her role as fan favourite Dr. Janet Fraiser, but the first of hers that I’ve listened to, leaving me without the opportunity to compare her performance this time to the one she gave in Savarna. Still, that didn’t keep me from enjoying the story on its own merits, and enjoy it I did.

Written by Sharon Gosling, Pathogen is the story of Dr. Fraiser’s race against time as she tries to save the lives of SG-1 – and her own, told in the form of a recording made for her adopted daughter, Cassandra. On a world containing Go’a’uld ruins, SG-1 explored an underground temple and triggered a deadly trap that caused them to ask for immediate medical assistance. They were infected with a dangerous disease and are depending on Dr. Fraiser to come up with a cure. Two days after her arrival, part of the cave system collapses, separating Dr. Fraiser and Teal’c from the rest of SG-1. She sustains a head injury that causes her to lose her memory, but that’s just the start of their problems…

It is difficult – or rather, impossible – for me to listen to this story without thinking of Dr. Fraiser’s eventual fate (cf. Heroes), and I am likely not the only one with such issues. Sharon Gosling knows this, of course, since she set the story deliberately in the show’s seventh season, some time after Fragile Balance, and even included a quick comment by Fraiser about the possibility of her death there in the caves.

Teryl Rothery’s acting is never a disappointment, and this audio drama is no exception. Her delivery is a joy – thoroughly believable and realistic. She is Dr. Fraiser, period. I’m glad that she’s been given another chance to play the character; even if Heroes ranks highly among my all-time favourite episodes of SG-1 (and, indeed, the entire Stargate franchise), I was rather shocked to find out that the two-parter was to be her last regular appearance (aside from an alternate version two years later).

In this story, she is ably supported by Christopher Judge in his usual role as Teal’c, who is trapped on Fraiser’s side when the rocks fall. Having reviewed Judge’s first audio (First Prime) some time ago, I know that he is new to this sort of thing; nevertheless, his performance here, limited though it is by virtue of Dr. Fraiser being the central character, is as confident and powerful as it was on the TV show.

The sound design is certainly okay, but most of the story – except for a few flashbacks – takes place in a cave, and there is little opportunity for variety. Still, it creates a fitting atmosphere for the characters to act in, and that’s really all it needs to do.

If there’s one thing I have to moan about, it’s the lack of SG-1’s main theme at the beginning – and, indeed, any sort of music, the ethereal warbles in the background notwithstanding. First Prime had some Joel Goldsmith-like cues, but even these are absent here.

All in all, if this is the quality of writing and acting we can continue to expect from Gosling and Rothery, I hope we get many more such audios. I know I’ll be listening to them!