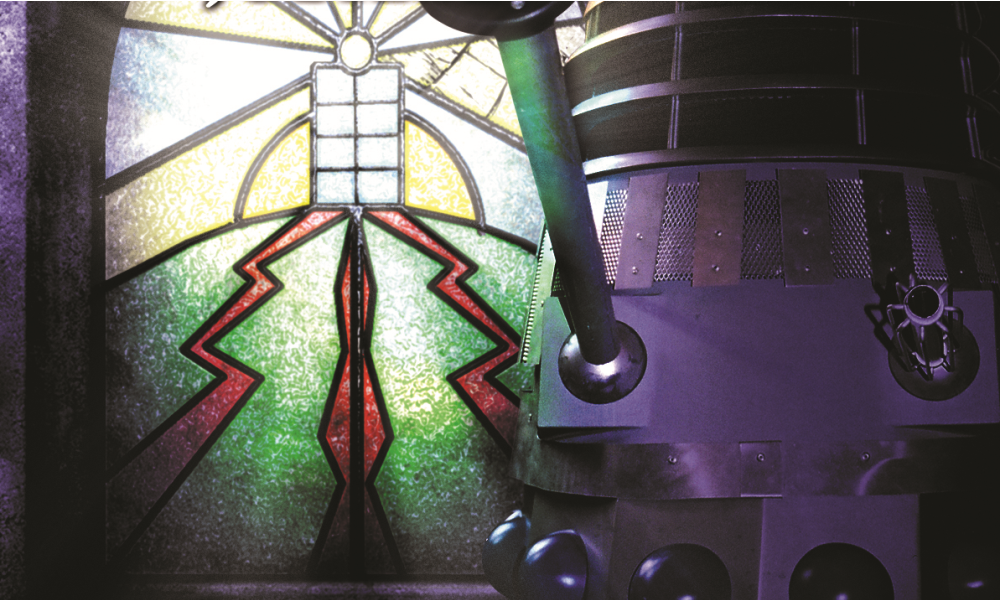 The first couple of minutes of Jubilee sound like any Dalek-centred story… until the Daleks start chortling evilly. It takes a complete left turn when they start screaming, “Scar-per! Scar-per!” at the sight of the Doctor. What we’ve been listening to is an advertisement for the latest movie, the trailer promising “More action! More Excitement! More Daleks being killed in very loud explosions!” and a long torrid kiss with Evelyn “Hotlips” Smythe.

Welcome to the glorious English Empire, about to celebrate the fortieth anniversary jubilee of its salvation from the Daleks. A happy land where contracting words is illegal, women are taught to be docile and vacuous, and America was reconquered – not that such debased people would ever be allowed to return to sully the purity of the English. A wonderful utopia that gives its unceasing thanks to its saviour and creator – the Doctor, who wiped out all the Daleks.

Except the one in the basement. The one about to be let out for Jubilee.

Now that the real Doctor and Evelyn have arrived, which are they going to consider the greater evil – the Dalek, or the Empire? And without the TARDIS, which has malfunctioned and disappeared, can they do anything about either one?

Jubilee is most famous for having been rewritten as the Ninth Doctor television adventure Dalek, although that episode ended up with only superficial similarities to this audio. The Big Finish version is less about the reveal of the Dalek in the dungeon – there are far bigger shocks in the story – than about turning deadly enemies into comic relief and advertising venues. (The Jubilee Pizza company of Torchwood was a shout-out to this audio.)

Big Finish aficionados will notice a strong similarity in tone between Jubilee and Shearman’s earlier audio, The Holy Terror. Although distinct stories, both are set in violent dystopias ruled by a weak man and a sado-masochistic woman, alternate worlds founded on insanity. Which means, like Holy Terror, this is a story by turns frightening and funny, full of unexpected twists. Jubilee can also be thought-provoking; demanding that the listener stop and think about propaganda, marketing, even the nature of history itself. “Are you so different?” the Doctor asks Evelyn at one point, and she can’t deny it.

Nicholas Briggs seems to be having the time of his life singing into the ring modulator (the Daleks have a theme song), and real life couple Martin Jarvis and Rosalind Ayres romp through their adoring, back-stabbing roles. Any listener is going to have just as much fun hearing it – when they’re not shivering from the casual terror of the story.