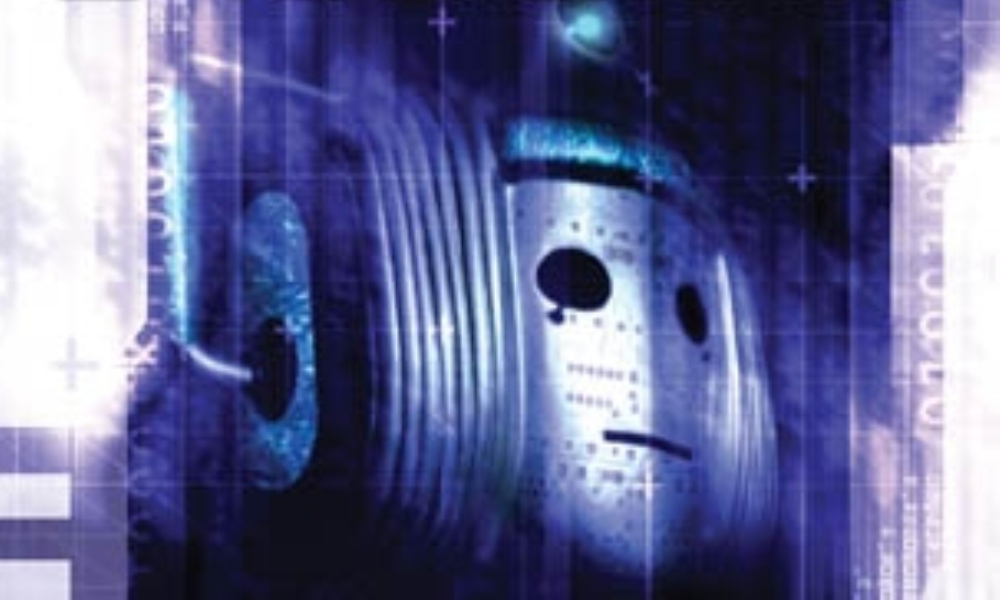 With James Swallow’s Cyberman 2 miniseries coming up later this year, I figured that now was an appropriate time to finally get around to listening to Nicholas Briggs’s original Cyberman miniseries, which was first released back in 2005. Briggs is of course the voice of the Cybermen, both for Big Finish and BBC Wales, and he’d also penned Sword of Orion, their hugely popular encounter with the Eighth Doctor. And he had experience spinning a Doctor Who monster off into its own set of adventures, as he’d been the man responsible for Big Finish’s epic Dalek Empire maxiseries.

I’d known that Cyberman was connected to Sword of Orion, but I hadn’t realised quite how much. As Part One opens, humanity is still involved in the Orion Wars that formed the background for that audio drama, battling the androids who want their freedom from human oppression. Scorpius focusses on a smattering of characters involved in this conflict, but mostly and principally Admiral Karen Brett, who as the story opens is the commander of the Redoubtable. The Cybermen are very much kept in the background of Scorpius, making their first appearance as a hologram early on, but not showing up in person until halfway through.

But the Cybermen are very much at the heart of this story: the defining characteristic of the Cybermen is their need for survival, the fact that they took themselves where they needed to be out of necessity. Necessity is very much what drives Brett: the war with the androids gets progressively worse as the story goes on her, despite her best efforts, despite her always doing what needs to be done. The story opens with her torturing a man to obtain vital information, but not even that results in a clear-cut victory. And as she moves deeper into desperation, she also finds her responsibilities increasing more and more. It’s easy to see how future instalments will connect Brett’s actions to those of the Cybermen, and I look forward to it.

I wish I could praise the actress who plays Brett, but Big Finish did some unusual things with this play, and one of them is that it did not provide a full cast list, instead just listing all the actors who played roles in the audio drama. I could try and guess who plays who, but I’ll spare you that tedium (though Nick Briggs and Barnaby Edwards are quite obvious). In any case, she does a good job, feeling like a real person without falling into any of the unfortunate stereotypes a female leader character can often be prone to.

No other character quite gets the same level of focus as Brett. Paul Hunt seems like he will early on, but we soon lose him as a focal character, instead only seeing him through the eyes of Brett, where he is a mysterious figure with mysterious motives. The listeners have the advantage over Brett of knowing that Hunt is (apparently) in league with the Cybermen, but not even that really explains his actions thus far – why is he in league with them? Why does he need to manipulate Brett to get what he wants? I hope these questions are answered satisfactorily in future instalments; right now, I am pretty intrigued.

Most of the other characters have smaller but solid roles: there’s Captain Liam Barnaby, Brett’s right-hand man, who starts out knowing the heart and mind of his boss, but slowly and surely becomes distant from her, as well as enmeshed in a quagmire of his own as the Orion War continues to deteriorate. And there’s Duncan Levinson, president of the Earth Alliance, who speaks in an American drawl I can’t quite bring myself to believe, but is otherwise quite good – a man trying to do what’s right and what needs to be done, but not quite succeeding, like so many others in this play.

I rarely talk about the sound design and music of recent Big Finish releases in my reviews, and that’s because there’s rarely something to talk about; it’s usual competent but not extraordinary. With Briggs handling sound design here, though, there’s no disappointment. The feel of this play is raw and real; I almost always felt tense listening to this. These are people on the edge, and the sparse yet detailed sound design does an exceptional job of communicating that. A typically excellent turn from Nick Briggs. The Cyberman voices are also excellent, of course; he uses same flat, supermechanical delivery here as in stories like The Girl Who Never Was, and I’m quite fond of it. The music is derived from Sword of Orion’s themes, simply providing more variations on the spooky du-du-dun-DU-DU-DUN-du-du-dun-DU-DU-DUH that pervaded that story, but that’s okay, as I love the music from Sword of Orion, and it’s just as spooky and foreboding here as it was there. Scorpius is magnificent to listen to, and I wish I’d heard it on headphones and not my car speakers so I could really appreciate it.

Scorpius couldn’t really be listened to on its own – it’s clearly one fourth of a larger story – and that makes it somewhat hard to judge. We have a lot of good setup here, but future instalments will have to pay this off in a suitable fashion. I can’t really critique it as a story when I don’t yet know the story! But it is a more than satisfying release, leaving me eagerly anticipating the next instalment in the series with Fear.

Scorpius (by Nicholas Briggs) was released by Big Finish Productions in September 2005.