Doctor Who: Prisoner of the Daleks review 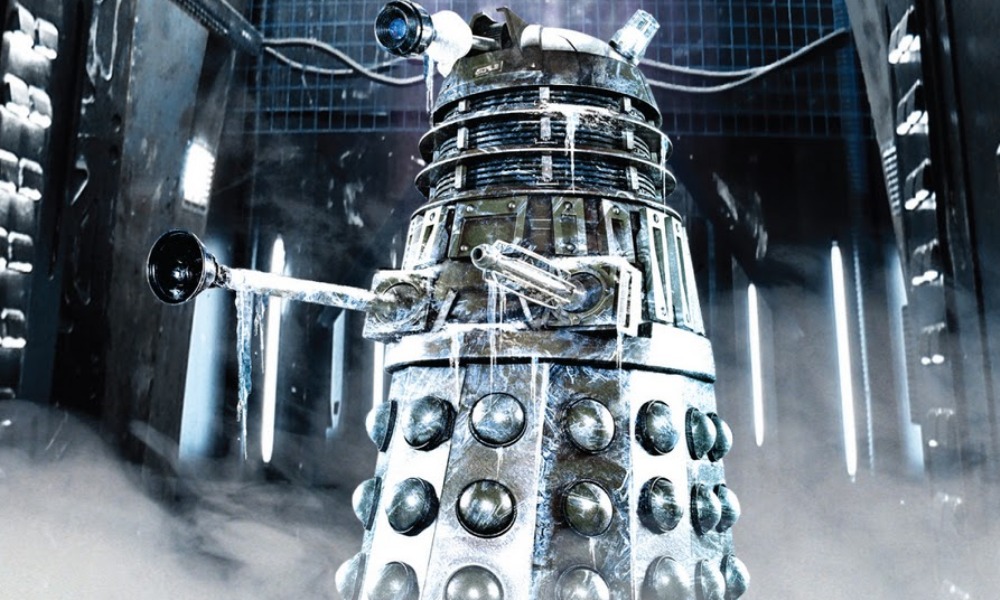 Travelling alone after the events of Journey’s End, the Doctor runs into the Daleks yet again – but in unexpected circumstances – and with no friends to back him up this time.

Trevor Baxendale’s Prisoner of the Daleks is a rather dark tale, considering it’s aimed at younger readers. It opens with the Doctor arriving on the planet Hurala – not (unsurprisingly) where he intended to go, but where the TARDIS has brought him after she jumped a “time track” while travelling through the Vortex; Hurala is an abandoned refuelling outpost which has lain forgotten for many decades. Whilst investigating the deserted planet he makes his way down to the base’s computer data-core room, where he is locked inside by the computer, to be rescued (five days later) by the crew of the bounty hunter ship Wayfarer who are Dalek bounty hunters. They get paid for every Dalek eyestalk they take to Earth Command, and when they discover a Dalek present on their ship, they decide to interrogate it, despite the Doctor’s desperate pleas to leave it alone.

The Doctor finds himself wishing that he had Martha or Donna with him – someone who could understand and help him in this awkward situation; Baxendale’s the only author of a solo Tenth Doctor novel to actually acknowledge the Doctor’s not been travelling solo for very long, which I personally appreciated.

Of course, the bounty hunters don’t take the Doctor’s advice – in fact, Jon Bowman, the nominal captain, makes it perfectly plain that he considers the Time Lord’s advice unwarranted and unnecessary. Bowman is a well-drawn character – we learn that he’s not opposing the Doctor simply for the sake of it; like the Time Lord, Bowman has a personal history that’s littered with encounters with the Daleks (this story is set during one of the big wars between Earth and the Daleks, and, therefore, before the Last Great Time War that wiped out Gallifrey and the Time Lords). Those encounters with the Daleks colour Bowman’s behaviour and personality, making him into an interesting and complex person, rather than a cardboard cut-out of a ‘stupid ape’ who opposes the Doctor simply for the sake of the author later showing how wrong he was.

What I particularly liked about Prisoner of the Daleks is how believable the crew of the Wayfarer are – the reader might not approve of their decision to interrogate the captured Dalek, for example, but at the same time, they’re written in such a way that you can’t help sympathising with them. I especially liked Stella – whom the Doctor clearly saw as a potential travelling companion from the way he responded to her questions about their initial situation, and the fact that she could see that the psychic paper was blank at their first encounter (and the fact she’s a medic probably reminded him of Martha Jones); and Koral – who is a cat-like humanoid alien and the last of her species (the Daleks have destroyed her planet, Red Sky Lost), with Wolverine-like claws that are able to do a fair bit of damage to a Dalek. It’s possible to see the Doctor relating to Koral slightly differently once he knows she’s the last of her kind: of course, he knows how that feels, and it makes him all the more determined that she, at least, of the Wayfarer’s crew, will survive.

I’m glad to say that Baxendale has the Doctor’s voice spot-on, capturing the Time Lord’s loneliness and continuing sorrow about the fate of his people in a way that’s neither mawkish nor sentimentally cloying.

The story moves at a really good pace, and I was easily able to imagine it as an episode of the TV show.

Prisoner of the Daleks (by Trevor Baxendale) was released by BBC Books in April 2009.