Doctor Who: The Scapegoat review 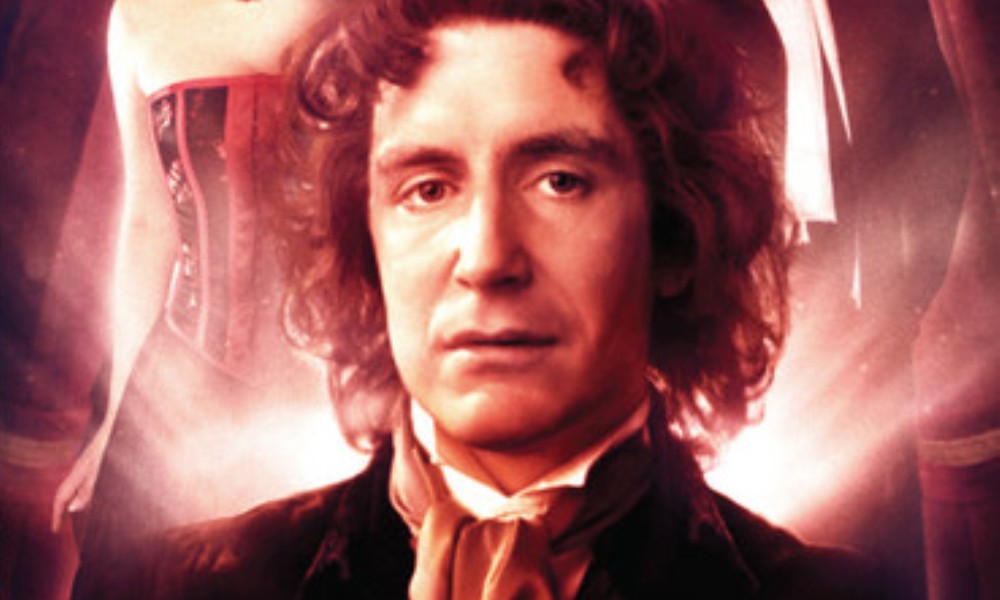 Not by design, I went into The Scapegoat literally knowing nothing about it. You can do this with a download if you want. Obviously I’d seen the cover at some point, but I didn’t remember it, and I didn’t look at it, nor did I check up on cast, writer, or premise, and there had been no trailer at the end of my download of Wirrn Dawn. I started totally blind. Who knows when the last time I experienced a story that way was.

When I was done, I checked to see who had written it – Pat Mills. Pat Mills? Of Dead London fame? Or rather, lack thereof? Apparently so. A surprise to me, given my lukewarm reaction to that play. But from the very beginning, there’s a lot to love in The Scapegoat (or The Spacegoat, as you might say if you were Sheridan Smith). The Doctor and Lucie are heading for the Moulin Rouge so that Lucie can meet Ewan McGregor, but of course the TARDIS goes off course and lands during the Nazi Occupation. A recipe for hilarity, right?

Apparently yes. Doctor Who has certainly does its serious stories about the horrors of Nazism (i.e. Just War), but this is not one of them. Which is good, because this story is fantastically bonkers. From the moment where the TARDIS turns into a carousel that Lucie ends up trapped on as it moves ever-more-rapidly, this story starts and never really lets go. Sheridan Smith’s banter with Paul McGann in these early scenes is good fun stuff, and once they get split up, she continues to steal the show in every scene she’s in. Before she knows it, she’s being forced to act in a dreadful knockoff of A Tale of Two Cities by a group of people with goats’ heads, one of whom is very nearly as fit as Ewan McGregor and is murdered on stage before her very eyes. Smith does a great job as Lucie throughout, especially in the scenes where she wakes up in her dressing room convinced she’s dreaming and when she has to “act” during the play, aided by Mills’s excellent dialogue.

Meanwhile the Doctor tries to convince a group of Nazis that a Morris column is an invisible Allied spy plane. This isn’t quite as interesting as the Lucie plotline, but it certainly has its moments (I enjoyed the bit where the Gestapo major accidentally uses the sonic screwdriver on himself, as well as the Doctor’s purchase of theatre tickets), and it joins up with the main plotline a little into the second episode. The explanations then start coming, and they’re barmy of course, but never unsatisfying. The pacing problems that often affect Big Finish’s one-hour Doctor Who stories aren’t evidenced here, either; the ending (though a trifle unsatisfying in one aspect) isn’t too sudden or unconvincing. It ends on a rather nice reflective moment from the Doctor – Paul McGann also being on his best form all season – that actually does something interesting with the events of Orbis. It’s a nice moment to end on (even if it is immediately undercut by a rendition of the dreadful theme music crashing in).

The casting in this one is excellent, too. The standout was Christopher Fairbank as Doc Baroque, the proprietor of the Theatre des Baroque, who manages to mix comedy, menace, and charm in just the right proportion. Surprisingly, I also really enjoyed Clifford Rose’s Major Treptow – the leader of the Nazi forces in the story – who plays a rather stereotypical pompous military villain, but with a large amount of style. Samantha Bond (The Sarah Jane Adventures’s Mrs. Wormwood) also features as Mother Baroque, leader of the goat aliens, and she puts in her usual standout performance, even bleating when necessary. Paul Rhys is a little underwhelming as Max Paul, but he’s by no means terrible, just somewhat one-note. Even the small performances were memorable, such as the two audience members whose perspectives we switched to during the theatre scenes.

Too often the New Eighth Doctor Adventures aim for “light-hearted” and hit “light-weight”, but The Scapegoat is a good mixture of fun and fantasy. My favourite Doctor Who moments are those that mix the mundane with the fantastic (a hospital teleported to the moon, the TARDIS stolen by an ice cream van, the Master on the Barnet bypass), and The Scapegoat does that very well. There’s a nice little commentary here, too, about people’s tendencies to blame their problems on other people – appropriate, given the setting. But most of all this is a cracking good adventure: nothing stupendous or amazing, but certainly the best of this season so far by a wide margin.

The Scapegoat (by Pat Mills; starring Paul McGann, Sheridan Smith) was released by Big Finish Productions in May 2009.