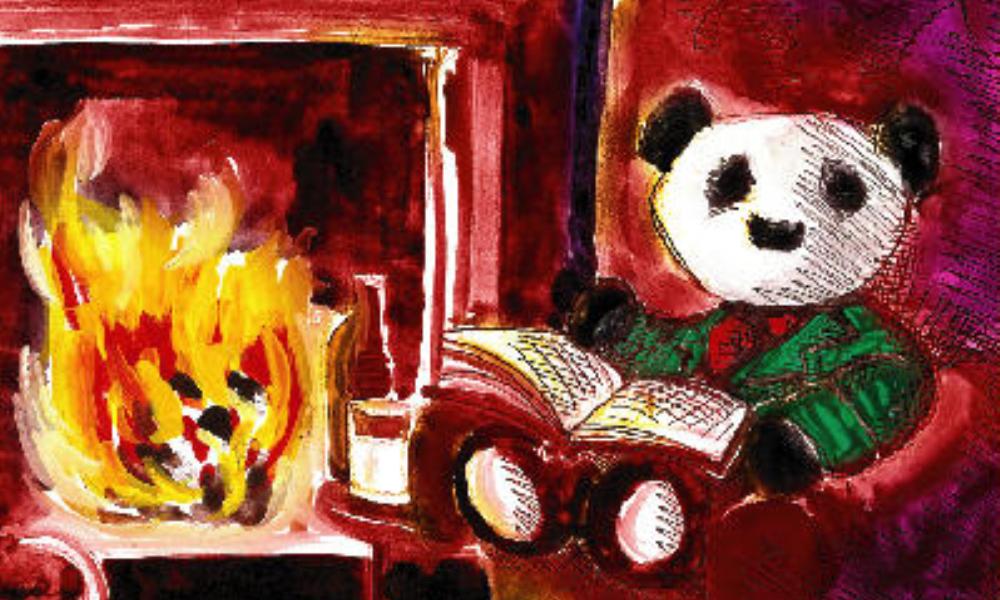 It’s a drizzly afternoon in June, and I’m in London, on my way to meet a very special interviewee indeed. Unusually, there’s been no correspondence between us beforehand – I’ve had to arrange things through “his people” – so, as I navigate the streets of Soho, I’m not quite sure what to expect. Add to this that the gentleman in question is ten inches tall, quite furry, and a traveller in time and space… Well, you can probably imagine how nervous I am.

I arrive early, and wait outside a small bar, as agreed. Amongst the somewhat grimy surroundings – posters advertising someone called Brenda Soobie are peeling from several boarded-up shop fronts, and nondescript litter is peppered across the pavement – the bar stands out, looking altogether classier than its neighbours.

Panda, my interviewee for the day, arrives a little late. He offers a paw and politely introduces himself, but I catch him giving my battered trainers a very disdainful glare. We order drinks (his is a gin and tonic, which he downs with unexpected haste) and then find a seat, during which he stumbles a few times, but his demeanour is such that you know any attempt to assist him would be dismissed.

For the uninitiated, Panda is the current travelling companion of Iris Wildthyme, a self-styled “transtemporal adventuress”. To cut a long story short, the pair fly around in a bloody great London bus, having adventures and, erm, getting drunk.

“I like to think of myself as one part of the Iris/Panda team, intrepid travellers in time and space,” offers Panda, when I ask him to introduce himself to our readers. “I supply those little moments which add a certain degree of class to our endeavours, as well as occasionally lending a paw to give someone a good punch up the hooter when required.

“As to our actual endeavours themselves, well we get up to all sorts. One day it can be battling sinister plots underneath London Underground, the next taking a tour of a deserted space distillery. And the day after that, if memory serves, battling the mother of all hangovers, parked up in a layby on Hyspero.”

It’s probably fair to say that in contrast to the sophisticated and refined Panda, Iris can be a little brash. I wonder what attracts Panda to travelling with her. “Iris can be refined when she wants, you know,” he replies. “The brashness and the boldness are largely a front if you ask me, masking a tender soul within.” Before he can elaborate, we’re interrupted by the barman; someone on the phone needs to speak to Panda. “Yes, yes, you demented harpy,” he mumbles to the caller, sotto voce, “I’ll pick up some mixers and a family pack of crisps later! Now do shut up, I’m being interviewed! What was I saying – oh yes, Iris has a tender soul, she really does.  She’s really a very delicate individual, just often, well, tired and emotional.”

Assuming that the mixer-demanding friend on the phone was Iris herself, I decide now might be a good time to ask Panda about the amount of alcohol that’s consumed aboard Iris’s Bus. Indeed, Panda’s representatives suggested that he would need to sober up before being interviewed today. “Did those ingrates Magrs and Douglas say that?” he asks, horrified, referring to the editors of the latest collection of Iris and Panda’s adventures. “Leaving aside the fact that those two talent vampires leech off us like… well, leeches, I suppose… have you ever seen the inferior unbranded wine they guzzle? Sometimes from a box! Pot. Kettle. Black. That’s all I’m saying.”

While we’re on awkward subjects, I point out that Panda’s presence here is something of a surprise – last I heard, at the end of an adventure documented as The Panda Invasion, he’d been separated from Iris. “Well Dan, that’s a bit of a sore point, frankly,” he frowns. “By my count, Iris has left me behind, lost me, misplaced me or caused us to be separated on 11 occasions so far, not counting that time I became a tad over-tired and emotional on inferior gin and walked out on her to join a circus just outside Buenos Aires. Let’s just say that we were unexpectedly re-united and leave it at that, shall we?”

Almost as mysterious as the events surrounding their reunion is Iris herself, whose origins are something of an enigma. When her life was first chronicled in books and on CDs, it seemed fairly clear that she was from Gallifrey, but the waters have recently been muddied somewhat. “Do you know, my dear fellow, I’m not entirely sure,” considers Panda, when I ask him to weigh in on the matter. “She certainly used to mumble on when in her cups about the ‘crisp clear mornings in the mountains of Gallifrey’ but recently I think we’ve got closer to the truth with the Obverse and the Clockworks and all that. She doesn’t like to talk about it much, but we did go back to the Obverse recently – the story is in the new book actually, so pop out and buy a copy now.” There’s a pause, before he adds, “God, I feel so cheap. The things I do for a quiet life and just a snifter of gin, now and then.”

That new book is an anthology entitled Iris Wildthyme and the Celestial Omnibus, containing the details of eleven recent adventures in the lives of Iris and Panda. I ask Panda to give us some details about some of the ursine antics featured within.

“Ursine?!” he repeats, genuinely affronted. “What are you suggesting? Do you want a punch up the hooter? This interview can end quite quickly, you know, if you carry on like that.”

“Anyway as it’s part of my contract with those damn book people, I suppose I’d better give you a précis,” he concedes. “Let’s see then – physically, we go from as far away as the very end of the Universe to as close as a certain well known amusement park, and temporally, we flit from many decades in the past all the way to the last sun still burning at the end of time.

“We solve mysteries,” he continues, probably enjoying this more than he’s letting on, “put time back on the right track, investigate strange goings on in sunny Mexico and even stranger ones in snowy Darlington, contact the dead, flirt with the living and generally have a whale of a time.

“And for those of you who know us of old, we also bump into a pinking shear wielding playwright of our acquaintance, a sixties hippy type who used to knock around with the Doctor (have you heard of him?) and team up with Marlene to fight Koschei in the forests of Russia.

This latest book has been put together by aforementioned editors Paul Magrs and Stuart Douglas. Presumably, Panda and Iris have some say in how they’re depicted. “You’d think we would, wouldn’t you?” he sighs. “But no – those two over-inflated egomaniacs have made all the decisions, even down to picking the stories to include! No mention of the time I single-handedly foiled the plans of the Warlord of Oom, but page after page of my captivity at the end of the universe! Not so much as a word about my daring escape from Marlion, but plenty about Gemma, my ertswhile amour!”

The book’s also been the subject of some controversy, with discussion of its very existence forbidden in certain dark corners of the internet. “Oh, I try to stay out of the politics,” Panda says. “Suffice to say that Iris and I have fought censorship and the forces of evil wherever we’ve gone, standing back to back against darkness and despite, unleashing our swords of justice in the face of attacks by the armies of the night, brandishing our… eh… our… sorry, I’ve completely lost track of what I was saying there…”

And with that, Panda has to leave, no doubt required to unleash his sword in someone else’s face. Or something. Later, though, I give him and Iris a phone call to ask one final question.

The aforementioned Doctor seems to have cornered the market for adventures in time and space – why should followers of his travels give life on Iris’s Bus a try too? “I’ve met the Doctor and he’s not all that, you know,” Panda replies. “Iris likes him, of course, but she can be overly sentimental when in her cups, if you know what I mean. It’s all videos of Brief Encounter and a couple of bottles of red and before you know it she’s roaring her head off and blowing her nose on any handy tissue. Quite a revolting spectacle to make of yourself, in my opinion. In any case, the Doctor is old news. We’ve moved on-”

“-EVEN THOUGH I HEAR THAT HE CONTINUES TO MOON OVER PICTURES OF IRIS EVERY NIGHT,” interrupts a female voice, “RATTLING ABOUT THE UNIVERSE IN THAT CHILLY POLICE BOX OF HIS WITH HIS HEART IN SHATTERED WILDTHYME-SHAPED PIECES!”

“Honestly, woman, have you no shame at all?” admonishes Panda, retaking control of the line.

Bit mad, this. I decide to try my luck with one last thing, though, and sheepishly ask for Iris’s number. There’s just something about her…

“Why ask me?” Panda responds. “Just head for Hyspero and you’ll find Iris’s number scrawled on the wall of any phone box which has recently doubled as a public convenience, let me tell you… What? I said no such thing, Iris! I was just telling him about the time the Bus changed into a phone box and all your decorative pill bo… yes, really…what now? Aprophylactic? How on Earth? Oh, don’t bother explaining woman, I’m on my way. Just let me get rid of this interviewer…”

Iris Wildthyme and the Celestial Omnibus was released by Obverse Books in April 2009.