The Scarifyers: The Devil of Denge Marsh review 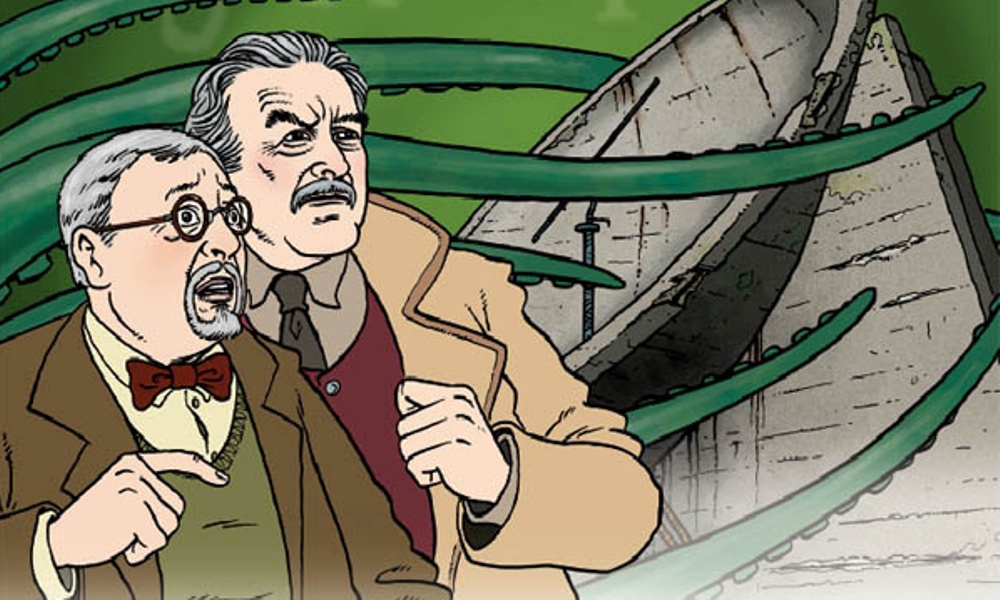 Mrs Willow: “I think we should go, George.”

Mr Willow: “I think we should find summat else to worship. Summat with less tentacles.”

Inspector Lionheart and Professor Dunning, members of the government’s newest department (MI-13), investigate the out-of-the-ordinary, the unexplained, and the downright weird. After a brief encounter with a WI group who claim to be witches, the pair are sent off to investigate the downright weird death of one Barnaby Weir, who walked into the sea near Margate, and then after his body was recovered, it dissolved. Lionheart and Dunning discover that Weir used to be employed on an RAF project in Kent involving “acoustic mirrors”, but they soon find that there’s rather more to the situation than they anticipated.

The opening two and a half minutes of The Devil of Denge Marsh – a conversation between Lionheart, Dunning and various ladies of the WI who purport to be witches – is the funniest opening to any audio drama that I’ve ever heard, and fortunately the humour continues apace for the next 90 minutes. The script wastes little time in explaining who Lionheart and Dunning are or what they do, but the time that is spent on that exposition is well-spent because it’s so funny, and then the listener is plunged into the adventure which progresses at a fast pace.

I confess to being delighted by the return of Aleister Crowley (who was introduced in The Nazad Conspiracy – and who is far more friendly to Dunning this time, than he was in the first audio), and the introduction of Alexander Caulfield-Brown, as Lionheart and Dunning’s immediate superior at MI-13 (both ably voiced by David Benson). Crowley and Caulfield-Brown interject much of the humour into the proceedings as Lionheart and Dunning attempt to find out just what’s going on down in Denge Marsh where the men from the RAF have apparently been hearing alien (not foreign, but actually non-terrestrial) voices via the nearby acoustic mirrors.

Equally amusing is Dunning’s membership of a small literary group called The Fantasists, who are clearly a parody of Tolkien and Lewis’ own Oxford-based literary group, The Inklings; Dunning, when he’s not rushing around the countryside being captured and offered up as a human sacrifice by some nefarious ne’er-do-well (which happens twice in this story alone), is actually a Professor of Ancient History and the author of a number of supernatural tales. Indeed, at one point during the proceedings, he observes to Lionheart that he should be able to turn part of his and Lionheart’s experience into a short story, or possibly a novella, but Lionheart immediately puts his foot down, saying that since they’ve signed the Official Secrets Act, this prevents Dunning using the material. Not that this will actually stop the Professor from writing the first adventure of “The Scarifyers”, with which he regales The Fantasists at their next meeting. To those at all familiar with The Inklings, Dunning’s literary group is a brilliant and witty parody; those unfamiliar with The Inklings should, however, still enjoy the tongue-in-cheek approach of writer Paul Morris.

Lionheart and Dunning go down to Denge Marsh in an attempt to establish why some former RAF staff are dying in mysterious circumstances. Once there the intrepid pair discover that the villagers worship one of the old Ancient Ones, Shub-Niggurath, who has been trapped in another dimension for centuries. Now, however, Peter Vanguard (voiced in a superbly sinister fashion by Jack Fox), has found someone who can release her – that someone being, of course, Professor Edward Dunning, who just happens to be a specialist in any number of dead languages, including the one that’s needed to unlock the portal between this and Shub-Niggurath’s dimension. Vanguard tricks Dunning into translating the inscription, and the Earth (and Time) moves literally. One of Dunning’s chief characteristics is his whole-hearted enthusiasm for anything that touches on his various interests which, of course, makes him suitably gullible enough to be easily tricked by the villains. (Lionheart, on the other hand, is an ex-police officer and frequently expresses a good deal of world-weary cynicism – as well as considerable enthusiasm for punching people “up the bracket”!)

Nicholas Courtney and Terry Molloy are excellent as Lionheart and Dunning – the pair are clearly having a ball in their roles: Molloy is very effective at putting over the well-meaning, occasionally absent-minded, and frequently bumbling Professor – a stereotype, yet so well-voiced as to seem fresh; Courtney’s Lionheart seems to be a somewhat more aggressive and cynical version of Brigadier Lethbridge-Stewart (his long-running Doctor Who character), yet he’s not unsympathetic, largely thanks to his very dry sense of humour and his obvious affection for the bumbling Dunning.

The plot of The Devil of Denge Marsh is pretty straight-forward, but it progresses at a good pace, and is packed full of funny moments. The Scarifyers are definitely worth keeping your eye on.

The Devil of Denge Marsh (by Paul Morris; starring Nicholas Courtney, Terry Molloy) was released by Cosmic Hobo in May 2007.