The Scarifyers: The Nazad Conspiracy review 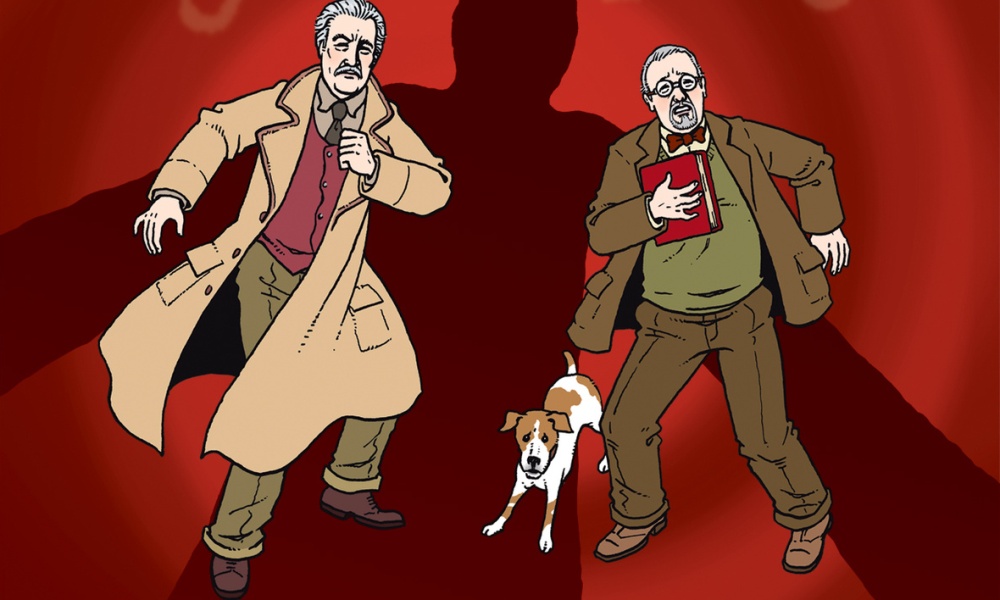 “Do your houseguests normally jump out of the window?”

It’s the Christmas holidays, 1936, and Professor Dunning is following his boxing day tradition of reading some of his own horror stories to his students. His reading is interrupted by a frantic Russian man who begs for help, then jumps out of the window to avoid an invisible monster.

At first Inspector Lionheart is convinced that it’s a simple case of accident – after all, the man fell a story, was run over by a tram, “and the startled carthorse didn’t help either”. But then the medical examiner finds that the actual cause of death was drowning – on dry land.

This is just one in a string of bizarre deaths. Although he doesn’t believe in the supernatural, Lionheart has to go back to Dunning for help – after all, Dunning is a professor of ancient history and has access to many obscure metaphysical texts that he uses for his stories. And what Dunning doesn’t know, Aleister Crowly (“Would you like something while you wait? Wine? Virgins?”) might.

The investigation leads Inspector Lionheart and Professor Dunning everywhere from a Russian circus to going under cover at the exclusive Nazad Club, which is so much more than just a social gathering for the conservative, wealthy, and titled.

This is the first instalment of The Scarifyers, the title coming from Lionheart accusing Dunning of “scarifying” his students. It’s also a genesis story, because when the dust has settled, Inspector Lionheart suggests that they permanently team up to investigate “the out of the ordinary… the unexplained… the downright weird.”

The Nazad Conspiracy is galloping good fun, not to be taken seriously for a second but to be enjoyed every minute. It’s peppered with too many in-jokes to reference, from The X Files through Edgar Allen Poe to a famous movie that I can’t name for spoilers. There’s even a brief nod to Doctor Who‘s Brigadier Lethbridge-Stewart, as Lionheart is voiced by Nicholas Courtney. But it’s all parody done well – the kind that is still funny on its own if you don’t know the reference. When they’re not making in-jokes, there’s fast-paced dialogue of the “Lady Walsingham is famous for her balls” variety. It’s audio panto for the science-fiction fans.

With only one CD release a year, Cosmic Hobo is following the old Gypsy Rose Lee advice to make the audience want more and not give it to them. On the other hand, if you are new the Scarifyers, there are already three adventures plus three podcasts, with another CD release to come along the way. They can be listened to out of order, but it’s always best to start at the beginning. Nazad starts great, and the series only gets better from there.