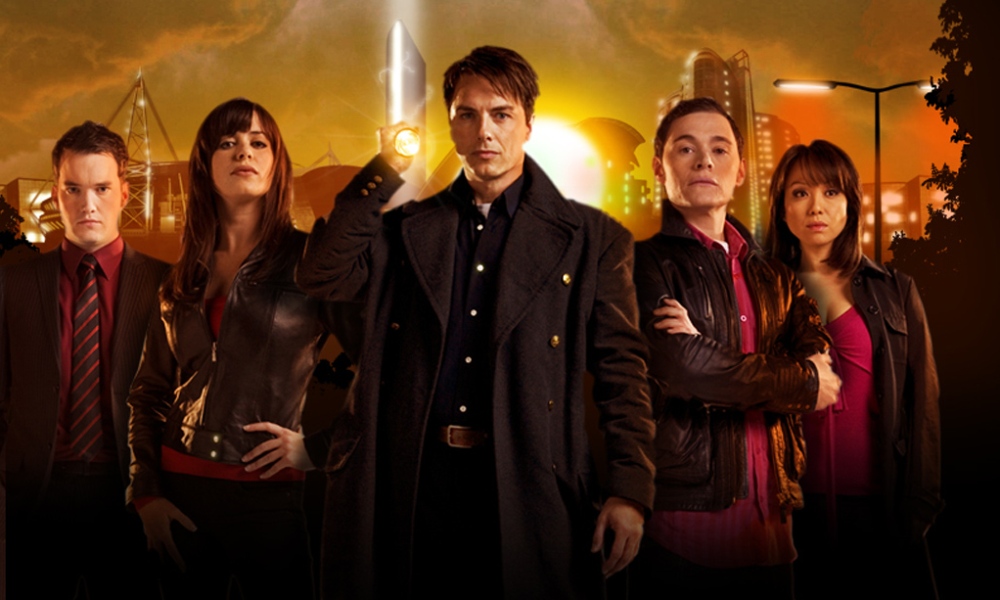 The Torchwood Archives, by investigative reporter and UFOlogist Warren Martyn, is a ground-breaking and nervy exploration into the dark underground world of Torchwood. Who are Torchwood, and what secrets do they…

Wait a minute, no, no. The Torchwood Archives, compiled by Gary Russell (although you’ll have to look hard to discover that) is a pastiche of the conspiracy theory investigative genre and inventively uses the scrapbook format and first person narrative to provide a cornucopia of information about Torchwood, its history and inhabitants. Warren’s notes and papers ‘found’ at Torchwood are interspersed with e-mails, online blogs, newspaper clippings, log entries, and project reports. Bookended with notes from Ianto Jones informing readers the sole copy of the book is now confined to the Torchwood archives in the Hub’s lower levels after the disappearance of Warren Martyn, the book keeps up the fiction throughout. If you are interested in behind the scenes gossip and info about filming the show, look elsewhere. If you’re bored with the same old actor bios and anecdotes and want to learn more about Torchwood itself, read on.

The book is roughly in three sections, general info, character guide and episode guide, combining new facts with existing info from Doctor Who and Torchwood episodes along with online content. After Ianto’s foreword (added ‘after the fact’ when the book was recovered by Torchwood) Warren introduces himself and his interest in Torchwood, a believable character whose outsider perspective is used to great effect. A recap of all the weird stuff that’s gone on around Cardiff and in the UK since 2005 leads back to 1879 and a detailed history of Torchwood from the events of Tooth and Claw (a yellowed reprint of Queen Victoria’s full proclamation on the creation of Torchwood is included) through to Army of Ghosts/Doomsday before moving specifically to Torchwood 3, taking in evil Victorian lesbians and blood-soaked New Years along the way. An analysis of the Rift is followed by an in-depth tour of the Hub illustrated with photos and artist drawings. This section has a wealth of detail which will thrill anyone with an eye for trivia; using real life events like the 1906 Swansea earthquake to explain the destruction of the private railway connecting the various Torchwoods is a neat trick to carry on the central conceit of the book.

The character guide profiles each of Torchwood’s finest (and not so finest – Suzie also gets space), although Owen, Tosh and Ianto get only two pages to Jack’s six and Gwen’s four. Warren’s own observations and conclusions are bolstered by info sheets filled out by each team member, including Martha, Suzie, and unofficially Captain John, providing facts and a sense of their personalities. Ianto is OCD but snarkily funny; Tosh sweet and sincere; Owen a sex-obsessed arrogant bastard; and John a psychotic loon with a fondness for smilies. Jack’s entry delves deep into his background and manages to straighten out at least some of his personal timeline. There is less still to learn about Gwen, but the basic facts of her life and accomplishments emphasise her importance to Torchwood. This section gathers together info from various sources to provide an overview of the characters, some blanks are filled in, and there are a few interesting new facts scattered in. Some small, like Tosh’s artistic endeavours, some larger, like Jack ignoring protocol to give Tosh a proper funeral, but they all give valuable insights into the characters. Finally, there are short bios of all known past Torchwood operatives.

The last section, which makes up most of the book, is an episode guide covering both seasons and the audio play Lost Souls. This is comprised of investigations on related subjects (e.g. cybernetics for Cyberwoman, and NLP for They Keep Killing Suzie), monster and alien fact files, Torchwood and alien technology reports, further information on the guest characters and their pasts and in some cases futures, and all the deliciously slashy Captain’s Blogs from the BBC America website (authored by James Moran).

Visually impressive, with a glossy design and many photos (including, hilariously, promo shots from John Barrowman’s theatre work representing Jack through the years), this is thoroughly a fan guide. The sheer fannish joy of the show shines through, from Ianto’s introductory speech about the beauty and importance of the work they do, the “belief in what Torchwood stands for”, to Warren’s delighted fangirling over his first sighting of “magnificent hero” Captain Jack. The only real flaw is the amount of recycled website content, but as a comprehensive overview of Torchwood this is an excellent and well-rounded resource which even provides some tantalising spoilers for Season Three.

The Torchwood Archives (by Gary Russell) was released by BBC Books in October 2008.