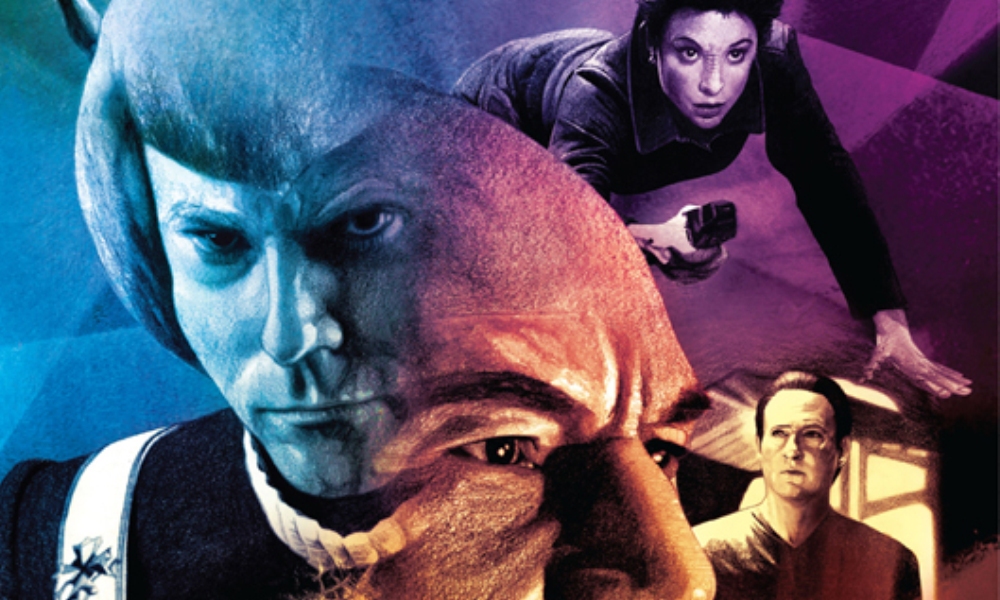 This second Myriad Universes volume features three new stories asking a what-if question in the Star Trek universe: Geoff Trowbridge shows us his idea of what the universe what look like if Spock had died as a child and the Enterprise had a different first officer, Keith R.A. DeCandido’s story features a universe where the Cardassian occupation of Bajor hadn’t ended when it ended in our universe, and in Chris Roberson’s story we experience a universe where Data isn’t the only fully functional Soong android.

Echoes and Refractions starts off with Geoff Trowbridge’s TOS-era story The Chimes at Midnight. In it, Spock died at the age of seven and the Andorian Thelin has become Kirk’s first officer and friend as shown in the Animated Series episode Yesteryear. When Khan Noonien Singh seeks revenge and threatens to destroy the Enterprise and himself with the Genesis device, a device created by Kirk’s son David Marcus to terraform planets, Thelin manages to save the ship and crew. But once the real power of the Genesis device is revealed, will they and Starfleet be able to convince the rest of the galaxy that they only have peaceful usage of it in mind, or will the Genesis device lead to an all out war?

Although Trowbridge undoubtedly is a talented writer, I have to admit that he wasn’t able to make two of his main characters (fully) work for me. I mean David Marcus, a character I already found to be extremely dull in his movie appearances, and Thelin, a character I knew little more about than that he was in an alternate universe TAS episode. Although the author was able to make Marcus a bit more interesting for me, he wasn’t able to make me care for him either way (like him or dislike him), and in the end I still got a certain “who cares?” vibe in his scenes. Thelin, on the other hand, fell totally flat for me – I just couldn’t connect to him at all. The decision to present a universe that actually is already established certainly has its appeal, and Trowbridge creates a different yet recognisable version of the movie era with Thelin which makes a lot of sense. But while I think I got where he was going with the character, Thelin just did nothing for me.

Like I said above, the universe Trowbridge created is a well-thought-out one, and to be honest I think if the characters had worked better for me The Chimes of Midnight could have been my favorite novel in the series, but as it is for me personally the novel sadly only is an average one.

Keith R.A. Decandido penned the middle entry of this volume, A Gutted World, a different version of the events surrounding DS9. Cardassia still occupies Bajor, but Kira Nerys has to break out to bring a vital piece of information to the other key players of the Quadrant. At the same time members of those key players behave strangely, ultimately leading the Quadrant in a state of great disarray. Is all this just a result of some ill-advised decisions or is something different playing out behind the scenes Kira can shed some light on?

Although the Deep Space Nine setting is the focal point of the difference in this story, Keith R.A. DeCandido easily interweaves all the different strings of twenty-fourth century Star Trek into the story. And without getting into much detail here, he certainly had great fun in playing with it without having to think about the long-term future or the silly thing called “canon”. Without a doubt, this is one of DeCandido’s darker works, but once again he proves his versatility. Where other authors often have problems with changing their style for the kind of story they want to tell he easily adapts without losing his “voice”. The story, which gives us a different take on a Dominion invasion of the Alpha and Beta Quadrants, is interesting and never loses steam, despite the many characters and powers it portrays. Some of the cameos of known characters might feel a bit constructed (Quark for example), but in the end they’re all fun, so you can easily forgive that. Overall, a fun story, and easily the strongest in the book.

Star Trek newcomer Chris Roberson concludes this volume with his TNG-era story Brave New World. In a universe where Data was far from being the only fully functioning Soong android, he and several other androids mysteriously disappear shortly after androids were granted more rights. Now he contacts the Enterprise and asks his old comrades and Picard especially for their help. Can they still trust him and what exactly are they able to do for him and his android siblings?

To be honest, I have a hard time reviewing this story, simply because it’s pretty unremarkable. It isn’t really badly written or anything, but at no point in the narrative I was really sucked into it. Pardon the pun, but the whole story felt totally artificial, and never really flowed. For example, I still haven’t fully figured out what exactly Picard was supposed to do in Data’s eyes when he summoned him, other than to fulfil the authors intention to get Picard and the Enterprise to the android colony. While the character work and the writing style are solid, neither really stands out in any way and are a bit bland, especially in direct contrast to Keith R.A. DeCandido’s story. This is the weakest story of the whole series so far, and more or less the only one where I thought that the idea behind the alternative universe wasn’t that interesting to begin with.

While it features the strongest story of the two volumes, A Gutted World, Echoes and Refractions as a whole is the weaker of the two volumes. I still recommend it though, for this story alone, and because I can imagine that many people who don’t have the aversion for his main characters I had, will like Trowbridge’s story a great deal.