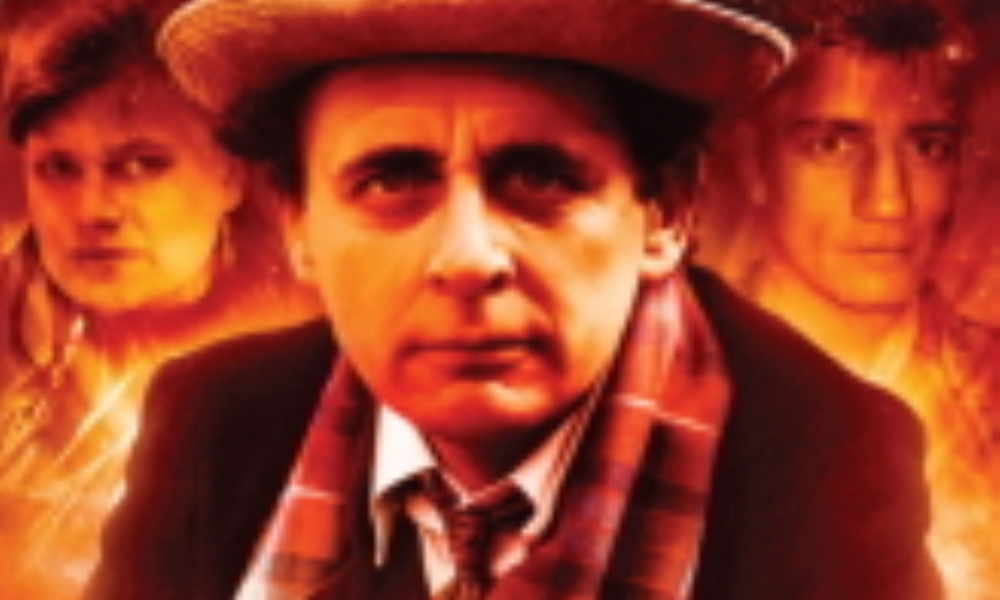 Big Finish’s November monthly release commemorates the forty-fifth anniversary of Doctor Who. Forty-Five follows the format of previous releases 100 and Circular Time, offering the listener four loosely-linked one-part stories by different authors. In this instance, the Seventh Doctor, Ace, and Hex travel to the past and future, meeting old and new friends, family, and enemies, all tenuously linked by – you guessed it – the number 45.

Any time multiple writers contribute to a single release, there is the danger of the result seeming disconnected or of uneven quality. Unfortunately, Forty-Five suffers from this, to a degree. While the tone is more consistent than the schizophrenic Sixth Doctor offering 100, the first two stories in Forty-Five are merely average, and are completely overshadowed by the third and fourth.

Forty-Five begins with False Gods, by Mark Morris, in which the Doctor, Ace, and Hex team up with archaeologist Howard Carter to attempt to undo the damage done by an errant student who is not at all what she seems. Benedict Cumberbatch shows suitable gravitas as Carter, but his presence in the story seems to be more of a historical name-drop than a vital part of the plot. Lucy Adams, who plays Jane Templeton, is given the unenviable task of making the audience feel sympathetic towards a not-very-likeable character, and does the best job she can with the material she’s given. Sophie Aldred and Philip Olivier are relegated almost entirely to running around and asking what’s going on, which always seems like a waste, though Hex does play a hand in the story’s resolution. Sylvester McCoy, however, gives an excellent performance at the end, showing some of the vulnerability that is such an intriguing part of the Seventh Doctor’s character.

While by no means bad, False Gods simply isn’t very memorable. Possibly, it would have been better served as a longer story, allowing the characters to be more fully fleshed out, and the plot explored in more detail.

The second story is Order of Simplicity, by Nick Scovell. The Doctor can never resist a puzzle, so what better to use as bait in a trap for him? Unfortunately, solving this particular puzzle could have terrible consequences for the entire universe. It’s an interesting idea, which, in practice, is let down somewhat by the incomprehensible motive of the villain of the piece. The characters are dangerously close to being cliches – the mad scientist and his dour Scottish housekeeper. Jon Glover (Dr Verryman) and Lucy Adams (Mrs Crisp) struggle to keep from going over the top with what are, to be fair, some rather over-the-top characters.

On the up side, there is some wonderful banter between Ace and Hex, always good for a smile. Sylvester McCoy does a wonderful absent-minded professor, as the trap into which he has fallen begins to make him much more absent-minded than usual. The resolution is clever, if a bit confusing on first listening. Again, the story felt constrained by the single episode format, as if the writer were going down a list, ticking off boxes to make sure everything was included so that the plot would make sense – it’s a good concept, which loses something in the execution.

In the next story, both Ace and Hex have close brushes with family members. In Casualties of War, Wetworld author Mark Michalowski resurrects the Forge, a quasi-governmental organisation formed to study and make use of the alien technology that washes up on Earth – think “evil Torchwood”, only with more competence and less sex. The twist is, the technology that the Forge is after in this particular case has been stolen by a small-time gangster who lives with Kathleen Dudman’s (Ace’s grandmother’s) next door neighbour… who just happens to be baby sitting Ace’s three-year-old mother, Audrey.

The plot is simple and straightforward, a fact which is more than made up for by the character interaction, as Ace once again struggles with her conflicted feelings toward her mother, and the Doctor struggles to protect Hex from the truth about his own mother’s death at the hands of the Forge. The story is beautifully acted, with the regulars on top form, and Paul Reynolds and Linda Marlowe giving earthy and believable performances as Joey and May, while Beth Chalmers is suitably cold and menacing as the operative from the Forge, Miss Merchant. The only off note is the use of the same actress, Beth Chalmers, to voice three-year-old Audrey. One can sympathise with Big Finish’s desire to avoid the use of child actors; however, the result just doesn’t quite ring true, and can be a bit jarring.

The only other quibble is with Big Finish’s recent penchant for setting up a big emotional revelation for a regular character, only to pull back at the last moment in order to maintain the status quo. Done on a regular basis, it smacks of manipulation in order to increase sales, and is ultimately just plain frustrating for the listener.

That said, Casualties of War is an above-average story, well-crafted and well-acted, and very deserving of repeated listening.

The final episode of Forty-Five is far and away the best, offering up that rarest of creatures in the Doctor Who universe – a fresh and interesting villain. Steven Hall’s The Word Lord is set in a secret Antarctic base in the mid-twenty-first century, where delegates from nations involved in the “second Cold War” are negotiating peace… right up until one of them is murdered.

Unsurprisingly, our heroes are under suspicion for the crime as the story opens. Fortunately for them, however, the base commander, Claire Spencer, has reason to be familiar with the Doctor, and drafts his help to solve the unsolvable crime before the world’s armies descend to recall the rest of the delegates and plunge the world into war.

Actress Linda Marlowe does an incredible job of making the no-nonsense Commander Spencer instantly likeable, to the point that her role in the climax of the story is surprisingly affecting, both for the Doctor and the listener. Paul Reynolds is excellent as the eerily nonchalant villain of the piece, a being who has the same sort of relationship to language that Time Lords have to time. The regulars continue to be on fine form, with Hex in particular getting some guffaw-worthy one-liners.

All in all, The Word Lord is fresh, enjoyable, and thought-provoking – a real gem of an episode. One can only hope that Steven Hall will be invited back to write a longer story for his evil creation in the future.

As a whole, Forty-Five is well worth a listen, with the sort of high-quality acting and production that fans have come to expect from Big Finish. Anniversary releases are always tricky because of the extremely high expectations that surround them, and Big Finish has, in this case, gone with a “less is more” approach, avoiding all attempts at a huge, multi-Doctor extravaganza, or reliance on old standbys like the Daleks or Cybermen. Forty-Five will never be remembered as a classic, but does provide a couple of nice jumping-off points for future endeavours, and perhaps the best indicator of the continued health of such a grand old franchise is just that – it’s 45 years later, and people are still coming up with fresh and interesting ideas.