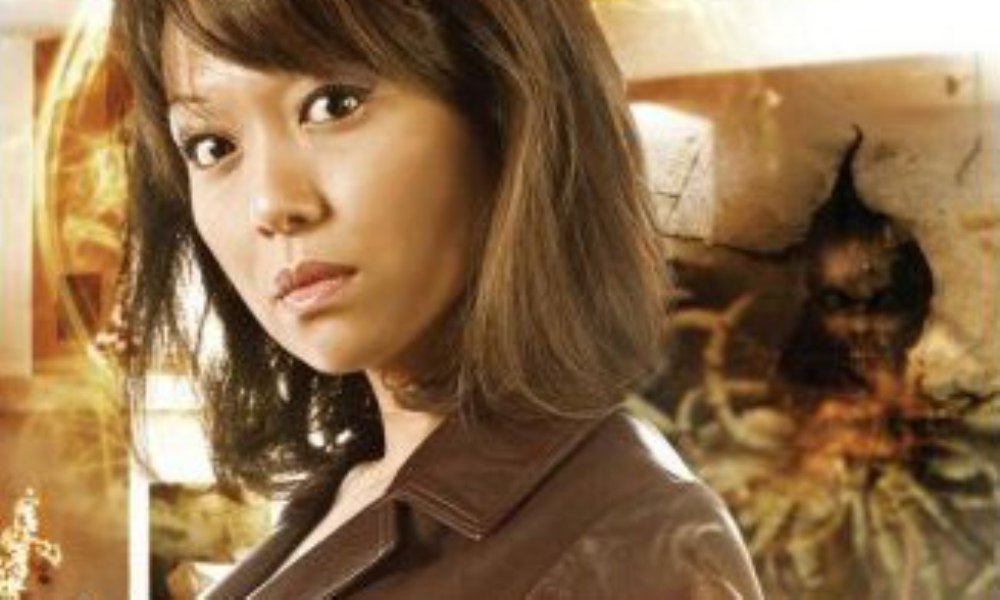 On their return from their honeymoon, Gwen discovers Rhys has big plans for married life. But when they visit Cardiff’s premiere luxury apartment building and discover people are disappearing, Torchwood are forced to fight for their lives in a desperate race against a vicious psychopath and a man-eating monster.

When an estate agent vanishes into thin air while showing Gwen and Rhys around an exclusive high tech condo building, Torchwood’s interest is piqued. But it’s Tosh and Owen who get a chance to play Mr and Mrs, going undercover as the perfect newlyweds in the seemingly-perfect SkyPoint. Owen befriends the troubled Lloyd family and forms a bond with little Alison, and Tosh begins to fall under the spell of the building’s amoral owner, Besnik Lucca. But when Lucca puts his plan to use Torchwood as test subjects into action, the team are trapped in a killer building loaded with both technological and supernatural threats.

While the first half of the novel is a tight psychological exploration of Owen and Tosh’s relationship and inner turmoil, the second half is a standard haunted house/escape drama. Weakly, the team are split for most of the action, with Jack and Gwen working together to overcome the building’s various defences to reach Lucca, and Owen protecting the Lloyds and searching for Alison, via some homemade incendiaries (of course Owen knows how to make bombs with household cleaning products and pickle jars) and pro domme tools. Although Tosh dominates the first half, she is humiliatingly reduced to a helpless chained heroine awaiting rescue in the second half. Ianto lives out his inner kickass action hero saving SkyPoint‘s token gay couple when they are trapped together in a lethal elevator, but then bizarrely vanishes entirely, not to be mentioned again until the very end. Although the ending is extremely abrupt and involves an obvious plot device to bring the entire team (minus overlooked Ianto) together for the dénouement, the last minute twist reveal (while far more supernatural than science-fiction) is unexpected. An unrelated subplot about Owen’s private pursuit of two predatory man-eating demon shape shifters taking the form of pretty twin girls continues the theme of Owen’s inner struggle to come to terms with his new status.

SkyPoint is very much Owen and Tosh’s story. There is a little clunky exposition explaining to non-viewers why the main character is a member of the undead, but otherwise Ford perfectly balances Owen’s dry black humour and cynicism with his newfound introspective view of “life”. Now forced to life in a “half life twilight”, Owen suffers the supreme torture of being entirely cut off from his body, “craving sex” but unable to indulge, walking the streets for miles in an insomniac haze. His fear and profound loneliness are clear, but it’s still the same old Owen: cocky, cool, smart and frankly a bit of a bastard. Tosh also thinks of herself as a freak, but it makes her special: a genius geek who takes refuge in maths and is in love with a zombie. Of course, she is also brilliant, quick witted, funny and can give as good as she gets. Tosh is usually so reserved, it’s a treat to be able to get inside her head. The one criticism of her characterisation is how out of character her pivotal furious unplanned attack on Lucca is. It’s necessary for the plot, but Tosh would not storm into a dangerous villain’s lair without plan or backup because of a bruised ego. They are well-drawn separately, but it’s the interplay between them that captivates. Both smart, messed up people, they are equally aware of what the other is feeling, but unable somehow to breakthrough. Playing husband and wife allows them to imagine a life neither will ever have a chance at, and they quickly fall into an uncomfortably realistic couple pattern. The unspoken subtext and game-playing between them, the squabbling and jealousies are as important as their Torchwood investigation. Needless to say the foreshadowing is unbearable.

While Tosh’s twisted version of a relationship with Owen is the primary focus, there is some unusual exploration of her relationship with Jack. Tosh’s mild flirting and musings on playing “bed games” with Jack is a little out of the blue, but seeing just how Jack’s rescue of her from UNIT prison gave her back her life and hope when she had resigned herself to insanity and death, show just how much Torchwood are Jack’s team. “Jack’s [past] life was not important. What was important was that Jack would always be there for them. He would disappear, but always come back.” Jack himself is vain, flirtatious and fond of innuendo and inappropriate humour. There are subtle mentions of his romantic relationship with Ianto (primarily from Ianto’s point of view), and Jack’s adoration of Gwen coupled with his wish for her to enjoy a normal life.

Gwen here is more than deserving of Jack’s affection. She’s resourceful and competent, independent (she insists on keeping her maiden name) but a devoted wife to Rhys, her hero, who she is obviously overwhelmingly in love with. Ianto is intelligent and determined and equally devoted to Jack. While it’s nice to know he has now “earned his stripes” and no longer regarded as just the office boy, he is woefully underused, and there are some canonical conflicts with the episode Fragments. The team collectively work well and have an authentic banter during their few scenes together.

Besnik Lucca, immaculate wealthy playboy soulless sadistic killer super villain, is almost a caricature and the description of his “pantomime fury” is apt. The Lloyd family has more depth and the reader does care about them, but none are as multidimensional as the team (although the constant point of view changes, switching from Tosh to Owen’s thoughts and back, can be confusing). The discovery of a horrible gelatinous blob with floating eyeball (which I badly want to be a Futurama reference) is pretty gross, and the unnecessary violence of a kid being exsanguinated off-putting. It’s far scarier when Tosh is being stalked by an unseen monster, atmosphere used instead of action.

Internet fans will spot a meta-reference to Abigail Crane, and it’s fun spotting the pop culture influences. Lucca’s warped plan to use team Torchwood as guinea pigs to test his fortress is reminiscent of the “killer house” movie Demon Seed, and evokes comparisons to the last act of Fleming’s 007 novel Doctor No and the human-hunting concept of The Most Dangerous Game. The brave heroes leading a team of civilians to safety references The Towering Inferno and The Poseidon Adventure with a dash of Die Hard, while the inverted dystopia of the superficially perfect microcosm society of SkyPoint owes a nod to classic claustrophobi-flicks like The Stepford Wives and Rosemary’s Baby.

The main theme, one which runs through the series, is the atheistic view of life after death. Both Owen and other characters are haunted by the unrelenting cold darkness and the loss of hope for “the lie that keeps the human race sane”. But it’s not nihilistic because it’s coupled with the idea of taking hope in life and living for today, not for the promise of salvation after death. Granted, this is not Forrest Gump. Tosh’s rescue from UNIT, Ewan Lloyd’s rescue by Lucca, Owen and Alison’s second chances at life, all show the unexpected hope that materialised just when all seems lost, even if it comes at a high price.

A secondary theme is the nature of reality vs image, and the human need to hide the darker parts of ourselves. The characters who live in SkyPoint, from the prim spinster-by-day dominatrix-by-night, the heroin addicts, the devoted mother who hates her daughter, are ultimately a facade. Fake people living in a fake world. Seeing Owen and Tosh reconvene with the rest of the team after their first day undercover, seeing the shiny new twistedly perfect SkyPoint contrasted with the grimy dangerous but basically ‘real home’ of the Hub, shows how much Torchwood is a home and a family, and what those things mean. For all their flaws, Torchwood are not hiding.

SkyPoint (by Phil Ford) was released by BBC Books in October 2008.