Doctor Who: The Darksmith Legacy preview 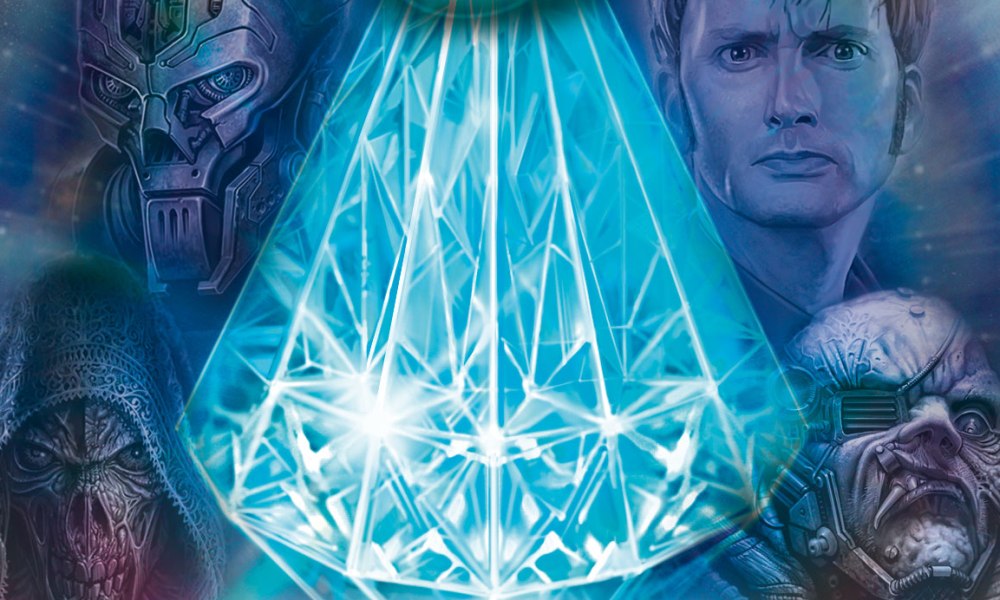 It’s a Thursday evening in November, and Unreality SF has braved the cold (and the strange drunken man on the Tube) to visit the Earls Court Doctor Who Exhibition in London.

When we arrive, the venue is already filling with people. Quite frankly, it’s all a bit surreal: a huge TARDIS dominates the entrance, a cardboard cut-out of David Tennant greets visitors as they enter, and the voice of the Daleks and Cybermen is cheerfully milling about, sans ring modulator. Bewildered, I decide to take advantage of the free wine.

The Exhibition is, of course, superb, but we’re not here for the Clockwork Robot with the wonky hairpiece, or the blue-screen TARDIS console room. Nor are we interested in being exterminated by a trio of Daleks, or seeing the Tree Person who’s grabbing his crotch in a slightly suspicious manner. Tonight, journalists and young Doctor Who fans have assembled for the launch of a unique series of books, which will be hitting shelves in 2009.

Unless you’ve been stuck in the Medusa Cascade, you’ll probably be aware that Doctor Who is taking a break on television next year. Instead of the now-traditional series of 13 consecutive episodes, four special shows will be aired, spread throughout 2009. Fans of the Doctor needn’t worry, though, because BBC Children’s Books have devised something that might just fill the TARDIS-shaped gap in the schedules: The Darksmith Legacy, an ambitious ten-book saga aimed at younger readers.

Scraps of information about the series first appeared online in July this year, and interest in the range has been steadily building since then. The books have been referred to as a “multi-platform experience”, incorporating an interactive element alongside the traditional narrative, via a special website. However, more precise details have been shrouded in secrecy until now, and Unreality SF is among the first to get a sneak preview.

The basic ongoing storyline for The Darksmith Legacy has been devised by veteran novelist Justin Richards, who has also penned four of the ten books himself. The other six titles are the work of Colin Brake, Stephen Cole, Mike Tucker, Trevor Baxendale, Jacqueline Rayner, and Richard Dungworth – names that will be familiar to anyone who follows the Tenth Doctor’s adventures in print.

All the writers bar Rayner are present tonight, and as they discuss their work in a question and answer session, their excitement and enthusiasm is tangible. Justin, for example, describes the project as “the most fantastic experience”, lauding the central concept as “a wonderful idea”. As more and more information emerges, it’s hard not to share in his excitement, because there has genuinely never been anything quite like this before.

The principal selling point in terms of the series’ unique properties would seem to be the online interactivity. A copy of each of the books is required to access the corresponding area of the website, and once inside, readers can embark on individual quests to collect points in a series of puzzles and challenges. By combining their points with those of other users, the wider community can join together to unlock further areas of the site, turning it from a solitary adventure into a group campaign, with readers nationwide uniting to assist the Doctor.

We’re given the chance to see an early version of the website, which has been created by an experienced team at Complete Control, and it’s nothing short of superb. Admittedly, its functionality is limited at this stage, but it’s visually stunning, offset with some excellent animation and creative flair.

“[It’s] quite a dream job,” smiles Jo Galvin, who works as an online editor for BBC Children’s Books, and has been heavily involved with the interactive side of The Darksmith Legacy, “especially when it comes to dealing with Doctor Who, because it already has a huge online fanbase. And that’s also kind of challenging, because they expect a lot. So I wanted to make sure that what we delivered was a really broad experience, on and offline.”

Jo also reveals for the first time that the interactivity extends beyond the internet, with a special in-person event planned for a few lucky readers. “When you get to the end of [the] quest, as if all that fun wasn’t enough, you get entered into a prize draw,” she explains, “where a hundred lucky players get selected to go to a Collector’s Party – a very exclusive event.” Taking place during half-term in October 2009, after all ten books have been published, the publicity material describes it as “a once in a lifetime opportunity to win lots of Doctor Who prizes and see scary monsters up-close” at “a secret London location”. It’s clear that everyone involved has really pushed the boat out to make this series completely unique and innovative.

Talking to the crowd, Justin Richards confesses that work on the series hasn’t been entirely plain sailing. “We had a few challenges with The Darksmith Legacy,” he admits. “One of them was creating an overall story, and an overall tone and feel, to the series.” However, despite making such an effort with the continuity, he assures us that the books aren’t so closely linked that you have to read them all. “[The original idea was] for a ten-book series, where the books would be linked, but also separate in themselves,” Justin explains. Each story is relatively self-contained, so that readers can choose to read only a few of the books, or work through them in a random order, without diminishing the overall experience.

Interestingly, it seems that extra care was also taken in assigning authors to the series. “Justin had come up with a little paragraph for each of the ten parts of The Darksmith Legacy,” Stephen Cole recounts, “which were assigned in a fairly arbitrary way, weren’t they?”

Justin recalls things slightly differently. “[I had] an idea in my mind of which writers I’d like to do which books, to play to their strengths,” he explains, showing just how much thought and time has been put into this project.

All this is fascinating, and what we’re hearing about the series is genuinely quite exciting. However, we’ve just been presented with a goody-bag containing a Dalek air-freshener, two novelty bath fizzers, and a set of temporary tattoos, so we’ve momentarily got other things on our mind. As we shuffle into the corner to stick David Tennant’s face on our elbow, and play a quick round of “Oodoku”, we also take a few moments to read the sample copy of the first book.

It’s entitled The Dust of Ages (“I think it’s probably not giving away too much to say that there’s some Dust Monsters, and if you’ve seen my study, you’ll know exactly where the inspiration for that came from!” grins Justin), and the preview copy gives us a glimpse of the first three chapters. The prose is simple but lively, pitched at about the same level as the BBC’s Sarah Jane Adventures novelisations, and the story itself is very promising indeed. In the style of Doctor Who‘s current showrunner, we can reveal that it contains the words “rapping”, “rubbing” and “ravine”. Granted, it’s hard to form a detailed picture of the range from 40-something pages, but the first impressions are all good.

The interactive element seems to permeate the books themselves, too. The prose pauses occasionally, once to allow for a double-page spread with some facts about the moon, and again to incorporate a puzzle which, if solved correctly, helps push the plot forward. Chatting to the audience, Justin alludes to “activites, fact files, TARDIS data banks, and all sorts of things” like these, which make the reading experience that little bit richer for younger fans, beyond the gorgeous website.

The book covers also boast something of a coup, as the art is by Peter McKinstry, who also works on the television series. “It’s very exciting for us,” one of the authors comments. “Justin has provided us with a new monster, and Peter McKinstry has designed these monsters for the cover. So what you’re getting is a monster that is exactly how it would look [on television].”

And will there be any returning monsters from the television series? “They’re all new,” says Justin with a knowing smile, explaining his belief that returning monsters in one or two books would unbalance the series, “but they’re just as frightening!”

It remains to be seen how readers will react to this project, but it’s certainly a very intriguing and inventive concept, which seems to have been nurtured by good hands. And if even half of Penguin’s enthusiasm and ambition for The Darksmith Legacy can transfer onto the page (and the internet!), young Doctor Who fans are in for a real treat.

The Darksmith Legacy will be released by BBC Children’s Books between January and September 2009.