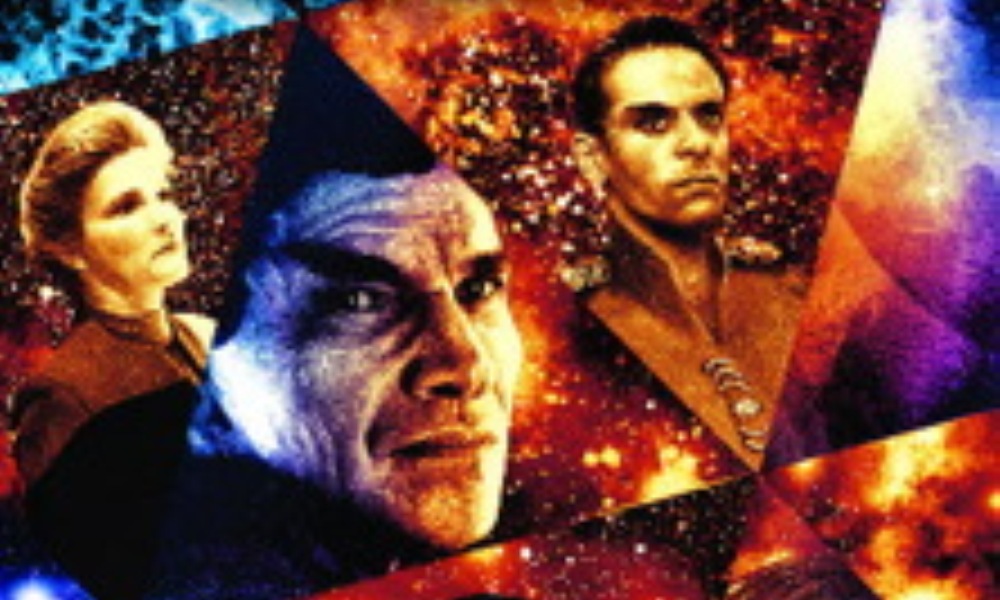 Infinity’s Prism is the first volume of Myriad Universes, a series of books collecting stories dealing with “What if?” scenarios in the Star Trek universe. The plan to do such a concept has floated around for years, having many tentative names in the process, but hasn’t been realised until this book. What if Earth had never agreed to an alliance with other races after Terra Prime’s activities? What if Voyager’s crew had to settle down in the Delta Quadrant? What if Khan had won the Eugenics Wars? If you want to find out how William Leisner, Christopher L. Bennett, and James Swallow answer these questions, this is your chance.

The book kicks off with Leisner’s A Less Perfect Union, in which we see a TOS-era universe in which Archer and the crew of the Enterprise NX-01 weren’t successful in stopping Paxton and Terra Prime dealing a devastating blow against Earth, leading to heightened xenophobia and the withdrawal of Earth from the Coalition. Kirk is the first officer under Captain Pike on the U.E.S. Enterprise, and hates Vulcans with a passion after a Vulcan ship killed his wife and child on a journey to a conference in Coalition space, mere weeks before this story takes place. So when his ship is elected to ferry diplomats, and a Vulcan who’s lived on Earth for most of her life, to a meeting aiming for Coalition membership, can he remain calm and not let his hate get in the way of reason?

The main strength of this story in my opinion is the character work. William Leisner did a good job in keeping the characters’ traits from the main Star Trek universe, whilst at the same time making it clear that this is a different universe than the one we know. He also makes good use of the limits of the short novel format by deciding to keep the story relatively simple and straightforward. Where the other authors in this volume weren’t able to make their stories fully work inside a novel of about fifty thousand words, William Leisner tells a coherent, engaging story which leaves the reader satisfied after finishing it. A Less Perfect Union isn’t an overly epic tale, but there are lots of little things which make the story work, beside the great character work and Leisner’s very accessible writing style. To give just one example, the decision to add an old T’Pol fits very well into the story, and making her the character who forces Kirk to rethink his attitude toward Vulcans was far more substantial than if Leisner had decided to use a (fully Vulcan?) Spock for that role; and I have to admit that I was relieved by the absence of Spock, for some reason. All in all, the strongest of the three novels in Infinity’s Prism.

The second novel in the book, Places of Exile, written by Christopher L. Bennett, deals with a Voyager crew which is really stranded in the Delta Quadrant after their ship is crippled after an attack by Species 8472. While Kathryn Janeway is still determined to make Voyager spaceworthy again, many of her crew begin to integrate into the culture of the Vostigye, the race which granted them asylum in their society. But when the Voyager crew is threatened by the Voth, and the Vostigye and other allies stand up for them, Janeway has to rethink her attitudes.

It’s an interesting take on the Voyager series, but in my opinion the main problem of this story is that it’s too ambitious for a short novel. As it is, the story is sketchy, and sometimes I had the feeling that more things were happening off-screen than in the text. This makes it hard for the reader to really get emotionally attached to the goings-on, and in the end I wasn’t able to do so. That’s especially disappointing, since I think there was a lot of potential in Bennett’s set-up and ideas; he just needed a “full” novel to tell his story in a really engaging way, in my opinion. There’s little to criticise regarding the “technical” aspects of the writing – the characterisations work well, and what is there in the story is written well – but nonetheless the sketchiness of Places of Exile works so much against it that it’s ultimately only an average novel, and the weakest of the book.

James Swallow contributes Seeds of Dissent to the book, a story showing a universe were Khan won the Eugenics Wars and it wasn’t him fleeing on the Botany Bay, but a group of “Basics”, people not genetically-enhanced and opposing him. When Princeps Bashir finds the ship almost four centuries later, he’s intrigued by one of sleepers, but will he like what she tells him about the real Khan Noonien Singh, who seems to be so different from the person he thinks he knows so much about?

It’s a very solid novel. Like Places of Exiles, in my opinion, it could have benefited from some extra chapters – specifically, chapters actually set in Khan’s time and directly telling the Botany Bay’s backstory in this universe. Other than that, Swallow tells an interesting, well thought-through tale very much focussed on Bashir. The characters and their reactions are very believable, both for the genetically-enhanced characters and their Botany Bay “guests”. Swallow is also able to find the right mix between character-driven, thought-provoking stuff and some action-oriented scenes. There are also some neat little things making this story work rather well: the inclusion of several characters from the TV series’ trips to the twentieth century in the Botany Bay‘s crew, and the holographic, counseling Khan, etc. Altogether an enjoyable read.

Overall, Infinity’s Prism is a solid collection of short novels, and while it isn’t the home-run I had hoped it would be, it’s well worth its cover price and is good for several hours of entertainment.