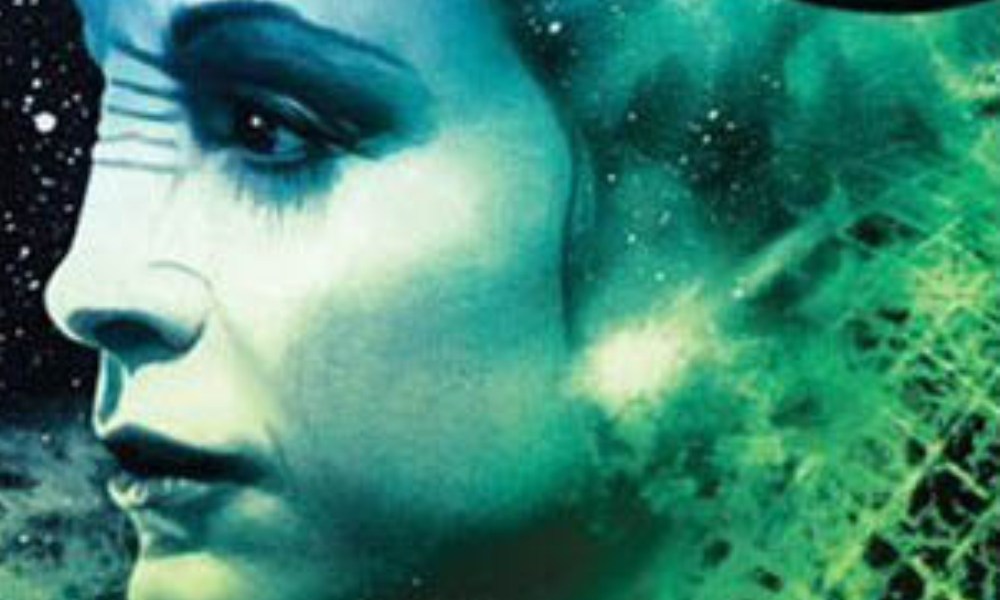 Fearful Symmetry is the long-delayed continuation of the Deep Space Nine post-finale books, and was written by newcomer Olivia Woods. After a wait of roughly two-and-a-half years, Fearful Symmetry finally continues the storylines of the series beyond Warpath, while giving the current villain a little more background. In Side One of this “flip book” – basically a book with two sides, each having its own cover – Kira has to deal with the Mirror Universe counterpart of a woman she once thought was her real self, Iliana Ghemor, while she and her staff are trying to find out what this universe’s versions of that character is up to. In Side Two, we learn of the back story of Iliana and what let her to do what she did.

Fearful Symmetry is a good book. The writing style of Olivia Woods is engaging and makes for a smooth read, and she was able to pin down most of the characters very well. The scenes with Ro unwilling to do anything for her health until she has figured out what is going on are some of the strongest of the book in my opinion, but most characters get some good scenes. Side Two gives a very nice insight on the political climate of the Cardassian homeworld during the occupation in the first half or so, and Olivia Woods very skillfully shows the changing views of a Cardassian soldier stationed on Bajor through the letters from her fiancé to Iliana, and overall the Side helps a lot in getting a better feel for the current “villain”. I have some problems with later parts of this side, but I’ll address that later.

Despite all the positive things you can say about this novel, there are basically two reasons why I haven’t given it a higher rating than I did: First of all, the overall impact of the novel is kind of disappointing, and it feels as if a real pay-off is missing. Sure, the book moves the story forward, and nicely so, but there’s no real “Wow!”-moment in it, and with that I don’t necessarily mean a big action scene, but just something that feels “special”. I know that isn’t really Olivia Woods’s fault, but after two-and-a-half years it’s disappointing to get a book that more or less says “the DS9 post-finale books are still alive and kicking, but for a real pay-off you have to wait another year”.

The other reason is the depiction of Dukat. I think that while the “Illiana-as-Kira held captive by Dukat as his sex doll” plot adds quite a bit to her character, on the other hand it’s taking away too much from the character of Dukat, in my opinion. Sure, he is a megalomaniac, sick, cold-hearted bastard who has conceivably raped many women, but I don’t think he is the kind of man who would have fun raping a drugged woman. As I see it, for him the “fun” lies in the act of breaking people, but you can’t do that when your victim isn’t fully aware of her surroundings. But even if you don’t take the drugging into account, before she got her fighting spirit back he had basically broken her already during the time of her captivity, to the point where she doesn’t really care anymore. I think by this point at the latest, he would have lost interest, no matter how fixated he might be on Kira. So having him act like that kind of ruined one of the few truly interesting villains of Star Trek a bit for me.

One thing which didn’t really affect my estimation of the novel, but still stuck out, is that the flip book concept doesn’t really work with the stories in the book – at least how I understood it. My interpretation of the concept was that the book would have a common focus for the most part, just told from two people’s points of view (in this case, Kira and Iliana-Kira), and that the two sides would lead to a shared climax in the end. But in the book you “just” get two more or less separate stories, one moving the plot forward, one adding backstory, which would be told in alternating chapters in “normal” books. But most likely that’s the effect of a switch of authors half-way through, which understandably led to a very different book than originally planned. It is an intriguing concept, though, and I hope we get the chance to see it actually applied in a more fitting manner sometime in the future.

Overall Fearful Symmetry is a fast, enjoyable read. Olivia Woods makes a strong debut and was able to rejuvenate my interest in the post finale Deep Space Nine books, after it had admittedly decreased somewhat due to the long wait for a new book after David Mack’s Warpath.

Fearful Symmetry (by Olivia Woods) was released by Pocket Books in June 2008.