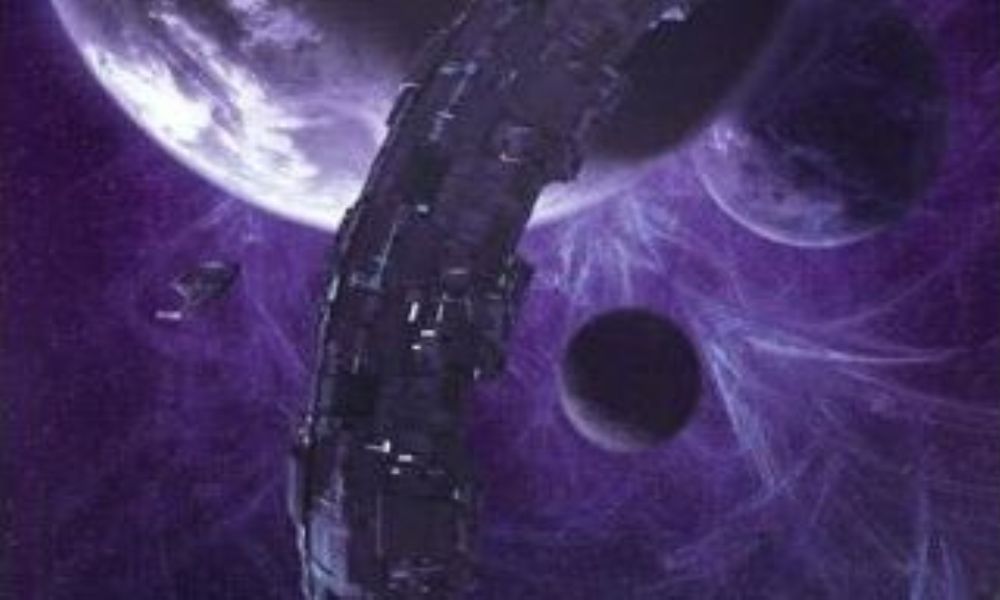 The book starts with John S. Drew’s Paradise Interrupted, in which the crew of the da Vinci has to deal with strange power outages, which put the pleasure planet Risa into grave danger when the weather is out of control once the weather control system is offline.

Paradise Interrupted is a pretty straightforward story. It’s nothing overly original, but it tells a relatively interesting story. The story also has a nice pace and the characterisations are good, but somehow it just doesn’t really made click for me while reading the story. So while all the pieces for a good or even very good story are there, John S. Drew didn’t really put all the pieces together to form a truly outstanding story. If you’re searching for a decent way to kill an afternoon, you can’t really go wrong with Paradise Interrupted, though.

The second story, Where Time Stands Still, was written by Dayton Ward and Kevin Dilmore and is a sequel to the Animated Series episode The Time Trap. The team of the U.S.S. Lovell, established in Ward and Dilmore’s previous CoE: Foundations trilogy, have the task to find a way to establish a safe passage into the Delta Triangle, where time is moving so slow it almost stands still.

Another decent story. I haven’t seen The Animated Series, so any continuity nods to the series were lost on me, but the story is fully able to stand on its own. It was nice to see the Lovell and its crew again, and while I didn’t know much about Moves-With-Burning-Grace before this story I think he is a nice addition to the crew. Despite the fact that there are some very nice scenes in the story, like the shuttle flight through the minefield, and all the important parts of the writing show the usual good Ward and Dilmore quality, ultimately the story doesn’t really catches enough fire to make it really stand out.

Next up is Glenn Greenberg’s The Art of the Deal. When the Federation decides to work together with business tycoon Rod Portlyn in a joint venture to rebuild a former farm world into an industrial world with research and development facilities, the da Vinci is sent to help with the construction. Soon the mission changes when the construction site is attacked by a terrorist attack, but the investigation results lead to a surprising turn of events.

Not only the weakest story of the anthology, but the weakest CoE story published on paper to this date. Over all, nothing about it really stands out positively. It has uninspired character work, the writing style is rather bland and the plot is extremely predictable. In connection with the predictability you will find the major gripe I had with the story, too: The fact that Corsi doesn’t see through Portlyn’s tactics makes her look a bit oafish, especially since the scene where I predicted the exact outcome is the one where she loses some of her suspicion. And if Corsi has shown anything throughout all of the da Vinci’s previous adventures, it’s that she isn’t a dummy, so basically you can throw Greenberg’s characterisation of her out of the window. This really is the first da Vinci story where I would say it wouldn’t be a big loss if you skip it.

Spin, written by J. Steven York and Christina F. York, is the next story. The crew has to deal with a strange, supposedly unmanned ship which is on collision course with the planet Lokra. After their first try to change the ships course fails, they investigate further and soon find out that the ship isn’t as unmanned as it appeared at first sight. The demands of the Lokra to destroy the ship as soon as possible only adds to Gold’s suspicions that there’s more to the story.

An average tale. I have to admit I don’t really know what to say about it, I guess the best way to describe it is to say it’s inconspicious. It isn’t able to really stand out positively, but on the other hand it isn’t really bad either. The basic idea behind the aliens on the ship is interesting, but ultimately the authors weren’t really able to do anything really worthwhile with it. Overall the Yorks offer a decently written, mildly interesting story with adequate character work, but I doubt I will be able to recall much of it in a few weeks, because in the end it’s to unremarkable to be really memorable.

Creative Couplings, the longest story of the collection (due to the fact that it originally was published as two eBooks) is next. It was written by Glenn Hauman and Aaron Rosenberg and basically has two separate plots. On the one hand we follow Captain Gold while he is trying to balance all the demands of family members before his granddaughter’s wedding with a Klingon, and on the other, Stevens and Tev have to deal with a holosimulation at the Starfleet Academy that is getting totally out of hand.

The best story of the collection. Both parts of the story are well written and offer good stuff, for example the clash of cultures in the Gold part of the story lends itself very well to some very entertaining scenes, while at the same time it shows that in the end there always is a possibility somewhere to reconcile different world views, no matter how conflictive they seem to be at first look. And while the whole trapped-in-a-holosimulation plot of the other part of the story isn’t overly original (that’s a nice way of saying it has been done to death), Hauman and Rosenberg were able to overcome this with some nice characterisations – I especially like their take on Tev in this one – and an overall engaging writing style.

The collection concludes with David Mack’s Small World. When an alien, followed and attacked by other aliens is able to reach a Federation starbase and tells them an unbelievable tale about a planet in box, the da Vinci is called in to investigate what this is all about and to find a way to free the planet from its confinement. But that proves even more difficult when the attacking aliens come back in full force.

Another good story. David Mack was smart enough to not even really try to explain the science behind the planet in a box, and concentrates on other things instead. In the end, the box plot is more of a background to some very good character stuff, especially Faulwell gets some much needed exposure, and some very nice scenes, like Caitano’s little act of braveness. Ultimately a lively adventure for the crew of the da Vinci, not as dark as some of Mack’s previous stuff, and honestly not his strongest story, but one  showing most of the qualities I have come to like in his stories.

Overall, Creative Couplings isn’t one of the strongest Corps of Engineers collections, but maybe with the exception of The Art of the Deal and to a certain extent Spin, you get a group of decent to good stories well worth the price of admission.