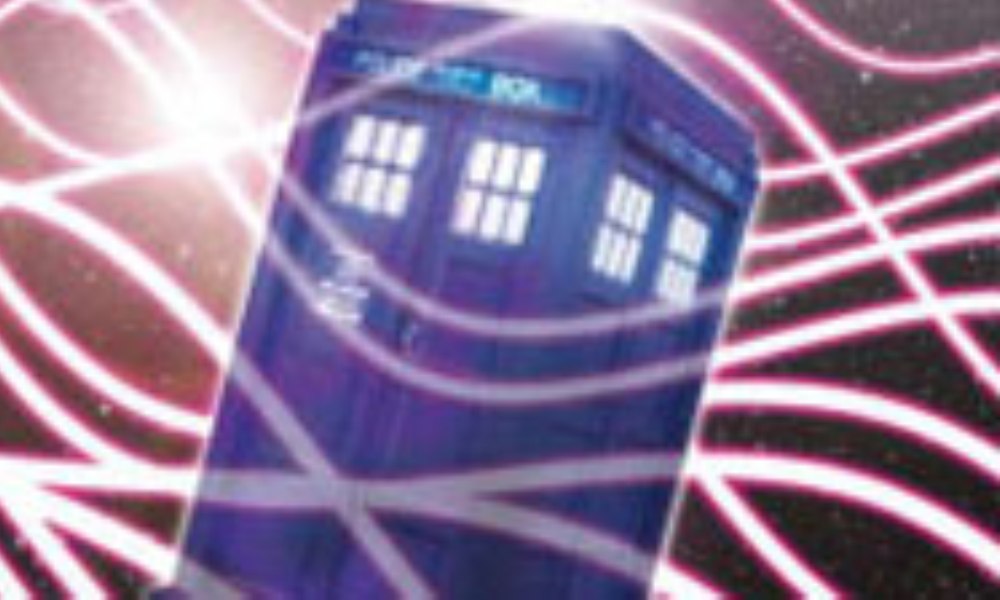 Communication is part of what drives society. It’s behind interpersonal relationships and interplanetary politics, it can open your mind to new ideas or close it to the world. And, conveniently enough, it’s the subject of July’s Doctor Who: Short Trips anthology Transmissions, edited by Richard Salter.

“Each story revolves around an aspect of communication,” Richard explains. “The focus might be on a particular medium like film, radio or letters in the post, or on barriers to communication such as censorship. In some cases the story might be presented in the form of some medium other than prose, and in others the story is about the chosen aspect.”

Today, Richard is talking to Unreality SF about the anthology, giving us a taster of what’s in store for readers. But whilst this latest project is an official, licensed Doctor Who product, his roots are in fan publications.

“Back in the early nineties, Virgin published the first Doctor Who short story anthology, Decalog,” he recalls. “Some users of this new fangled internet thingy decided to put together our own collection, dubbed ‘Net-Decalog’, and pitch it to Virgin. We were very naïve and never really stood a chance with the first pitch, but by our third we were under serious consideration to be Decalog 4. Then Virgin lost the Who licence and we lost our bid, but my story written for that collection was deemed good enough to secure me a slot in the published Decalog 4.”

One thing then led to another – Richard has popped up in several Short Trips books, and co-edited Myth Makers, an award-winning fanzine of short fiction for the Doctor Who Information Network in Canada, where he’s now based.

Four years ago, he got in touch with Big Finish and put together a pitch for an anthology. “I pitched four ideas to Ian Farrington,” he remembers. “Two of those ideas, amusingly, were already in the works under different editors. Clearly great minds think alike! The third was an idea to use the Ten Commandments as jumping off points for Doctor Who stories, an idea I pitched to Virgin back in the Net-Decalog days. The last idea was titled, simply, ‘Messages’, and came to me while I was working on the others. Ultimately Ian liked Messages the best.”

And now, in 2008, the book is ready to be released as Transmissions – “It’s been a long wait,” he says, but describes it as “thrilling” that it’s finally ready – and he’s eager to preview a handful of the stories.

“If you’re looking for something creepy,” he suggests, “there’s Richard Wright’s Lonely, which takes place in an internet chat room and certainly creeped me out the first time I read it. Then there’s Dave Hoskin’s iNtRUsioNs, which is about scary things in the mail. That one features the First Doctor travelling alone.

“Pete Kempshall’s Link tackles the question at the start of the back cover blurb. What would it be like if you lost your ability to communicate? The answer proves quite disturbing for Sarah Jane Smith. And if you’re after something funny, Steve Lyons’s See No Evil certainly has its moments, especially when Peri is forced to use some amusing alternatives to swear words.”

Sounds like an intriguing enough mix, but I wonder whether there’s anything in particular which sets Transmissions apart from other Short Trips books.

“[There are] a couple of things,” Richard believes. “Firstly, I deliberately set out to play with story format and layout. Many stories are told in traditional prose, but I have a few that are somewhat unusual. Graeme Burk’s story, for example, contains excerpts from a movie script, while Ian Mond’s unfolds in the form of interviews with the characters and various ‘attachments’, which together tell a story in a really unusual way. Obviously there are limitations to what you can do with printed text in a book – you can’t show clips of the actual film of course, but I think we’ve pushed the boundaries of what one might expect to find in a Doctor Who short story collection.

“Something else that’s a bit different,” he continues, “is that half the stories don’t feature companions. It wasn’t planned that way but that’s how it worked out. I quite like that – the TV series rarely shows us the Doctor travelling alone, so it’s something a bit different. I think the companion role is sometimes less necessary in the short story format anyway. Look at how [recent TV episode] Midnight – practically a short story made for TV – works because the Doctor is on his own, and nobody knows who he is or can vouch for him. Also, the TV series, novels and audios sometimes struggle to give the companions enough to do. In short stories, there’s no room for padding, so if a companion isn’t necessary the story will benefit from not having one. That said, I have one story from Mags Halliday that features Tegan and Turlough, with the Doctor only showing up at the end, and many stories have prominent roles for companions including fan favourite Professor Bernice Summerfield. So in the end I hope it’s a balanced collection.”

What type of fans will the book appeal to most? Richard believes that is should be accessible to most readers. “You don’t have to be a continuity junkie to read Transmissions,” he reassures me. “You don’t even need to have seen any of the classic series of Doctor Who. I didn’t worry too much about putting something in for everyone, I want to let the stories speak for themselves. A good story should appeal to everyone, whether or not it tickles your fanboy extremities.

“The only thing I did make sure of was that each incarnation of the Doctor is represented at least once. This seems to be an unwritten rule for Short Trips editors – I don’t honestly know where it comes from but we all seem to adhere to it! Maybe if I get to do another collection I’ll be a rebel and break that rule! Perhaps a collection where every story features Peter Davison’s Doctor. Man, I’d love to do that!”

Richard also believes that the current series of Doctor Who has had a slight stylistic influence on the stories. “The new series has shown people what Doctor Who is really capable of when there’s a bit of money behind it,” he says, “so you’re no longer limited to three sets and a monster made of cardboard.” Whilst Big Finish’s licence forbids the use of characters or settings from the Ninth and Tenth Doctors’ eras, some of the stories “feel more contemporary”, whilst there are also a number of tales which “could slot seamlessly into their respective eras” – it looks to be a nice healthy mix of old and new.

Looking through the list of authors for Transmissions, a few names in particular leap out: as well as experienced Who novelists like the aforementioned Steve Lyons, there are “big names” like Lou Anders, a well-known American sci-fi author and editor.

“Lou and I go way back,” explains Richard. “I dragged him into the Doctor Who world, which became a springboard for his very successful career.” Lou provided some constructive criticism of Richard’s first short story pitch to Virgin – “ripping it to shreds”, as he describes it – and fellow Transmissions contributor Andy Lane did the same with one of Richard’s New Adventures proposals. “It’s a shock at first,” Richard relates, “[to have] such nice people completely tearing into your work, but every writer needs to have someone smart and brilliant tell them specifically everything that’s wrong with what they’ve written. Lou and Andy were at the top of my list to invite to pitch and they both came up with great ideas.

“As for James Moran,” he continues, referring to the writer of recent Doctor Who and Torchwood episodes who also has a story in Transmissions, “when I drew up my list of potential invitees, many of the new series writers were on there. Some were a pipe dream – I didn’t really expect Steven Moffat to have time to contribute! – and others were new to me. James was very enthusiastic about the idea when I contacted him, and came up with a fun and wonderfully devious idea, the sort of story that fits well between longer tales with heavier themes. It reads fast but manages to be memorable too. No easy feat. Every collection needs those lighter, fun stories or everything starts to feel a bit relentless. James’s story fit that need perfectly.”

Richard has mentioned online that he originally wanted to bring new writers into the mix as well, by holding a short story competition. He had seen a similar contest run by Simon Guerrier, and wanted to create the same buzz and excitement about Transmissions. “Plus,” he adds, “I come from the fan-fiction background. A competition seemed like a great way to find new voices. ‘Discovering’ someone who then goes on to bigger and better things is one of the most rewarding things about being an editor.”

Eventually, after “chatting with a much more experienced editor”, Richard dropped the idea. “He pointed out that the workload on Ian and Simon had been so huge, I’d be absolutely buried if I did it all by myself. I realised then that I wouldn’t be able to spend the time needed on all the other stories if I was instead reading through a thousand-odd proposals. I don’t think people quite realise how much work it takes to edit one of these things. It’s a huge effort, especially if like me you have a day job and a new baby. So I ended up dropping the idea. If I get to edit another I’d consider it again.”

Even without the thrill of bringing aboard new talent, Transmissions looks like a fantastic collection of stories, and Richard is certainly very positive about it. “This has been an experience I’ve been looking forward to for half my life,” he says enthusiastically. “I absolutely loved working on it, so all those hours I put in don’t really feel like work. It’s good for my writing career as well, opening some doors that have already led to a short story commission for an original anthology and possibly editing an original anthology too. I hope eventually it will be stepping stone to a full novel, which is another dream of mine. I do have some new Short Trips ideas with Big Finish, so if they like any of them I would be delighted to do another one.”

With an enthusiastic editor, a magnificent set of writers, and a unique subject matter, this anthology is shaping up to be a must-read.

Transmissions will be released by Big Finish Productions in July 2008.