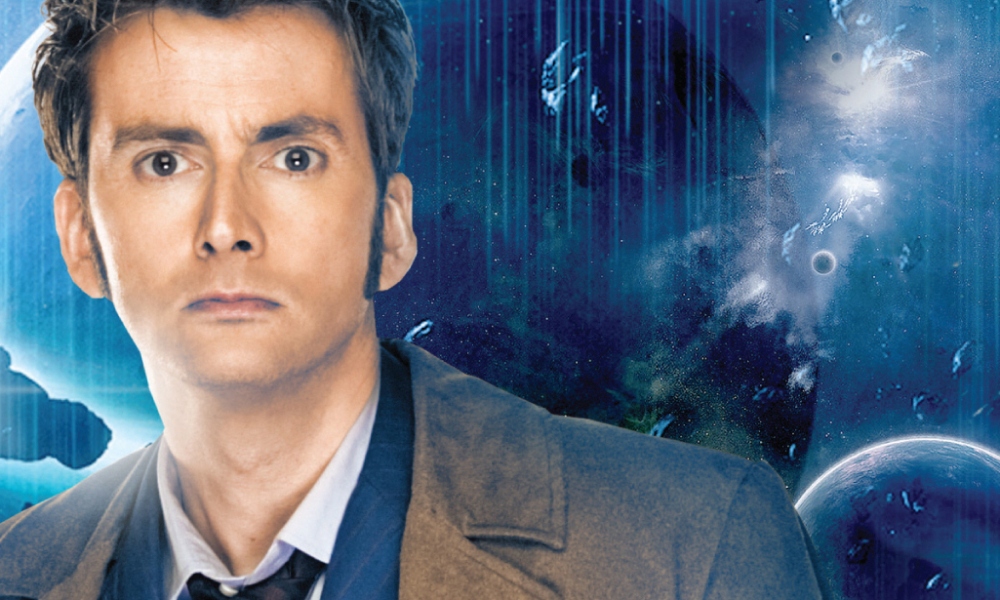 In our first conversation with popular Doctor Who author Lance Parkin, we covered everything from Kylie Minogue to glowing balls of memories. But what most fans of Lance’s writing want is more information about The Eyeless, his forthcoming Tenth Doctor novel. The blurb is currently available, and it outlines the plot briefly, but can Lance give us any additional information? “Very little at this stage,” he says. “The book’s not out until December, and I do want it to still feel fresh and surprising. [The blurb] sets the premise nicely, I think.”

He is, however, able to tell us that “the story all takes place on an alien planet in the distant future. The year 202,009,” and to talk about the fact that the Doctor is travelling solo for this adventure.

“The ‘no companion’ thing is not a spoiler for the end of the fourth series,” he explains. “The December books have a Martha book by Dan Abnett [The Story of Martha], a Donna one by Gary Russell [Beautiful Chaos] and then mine. They’re just playing around with the books a little more.  Part of that may be because there isn’t a telly season next year, I’m not sure.”

Some fans seem to have a perception that the new-series books are tightly controlled by the powers that be in Cardiff, leaving authors little freedom or room for creativity. Lance is happy to shatter any such illusions – “there was no-one from Cardiff tapping me with a cattle prod” – and he points out that the only thing they didn’t like about his book was its original title. “The reason they gave for stamping down on my original title, The Hidden Fortress, is utterly inexplicable: ‘it’s a terrible title, there isn’t a hidden fortress in it’. To quote Spinal Tap, ‘that’s just nitpicking’.”

Overall, Lance found the process to be an easy and comfortable one. “From my perspective, this was the smoothest, fastest, simplest commission for a Doctor Who book I ever had,” he recalls. “I got a call out the blue from the series editor, Justin Richards, he told me the book would feature the Doctor without a companion and that they’d had a lot of books set on Earth recently, so he’d prefer it if I didn’t set it on Earth. From there, I took a day or so to come up with an idea, Justin liked it, it took another day to write a two-page synopsis which was approved, I think, the next day.

“When I sat down with a blank piece of paper my fanboy instincts were to do something about the Time War, about Lucy Saxon, about the Space Pig. I already knew they don’t want the books to deal with any of that kind of stuff, because if they’re going to do it, they want to do it on TV,” Lance relates. “Which is fair enough, it is theirs after all. And it’s actually good discipline, I think. You end up having to come up with good stuff of your own, rather than hanging on the coattails of others.”

The TV series has been hugely linked to Earth of late – stories always involving humans, and regular visits to the planet itself, with a bit of Il Divo thrown in for good measure – so what was it like writing a story set somewhere else?

“One of the strengths of the new series is that it’s very Earthbound,” Lance believes. “All that stuff with Jackie and Mickey on the council estate grounds the show in reality. It was actually quite a challenge to write a story ‘like’ the new series but with no reference point to the present day. No chart music in the background or pop culture references. Again, it’s good discipline for me. Things I’ve written before like The Dying Days and Father Time are soaked in that kind of stuff. It was nice to have a change.”

But the print medium also allows writers a different sort of freedom in creating more fantastical and unfamiliar environments, in Lance’s opinion. “We SF fans don’t always appreciate just how much a mainstream audience distrusts or dislikes fantasy stuff, or dismisses it as silly, or can’t really deal with special effects,” he says. “That’s obviously changed – it’s clear now that Russell has been slowly easing the TV audience who used to think Holby City was a bit weird into a place where they enjoy Planet of the Ood. But the books don’t really have the same problem, you can take it as, ahem, read that the people who buy a Doctor Who book aren’t just being forced to watch it because their brother wants to. So the books have a freedom the TV series doesn’t.

“I’ve been saying for a while,” he continues, “that the books should be concentrating on stuff the TV series can’t possibly do. The Eyeless feels like modern Doctor Who, I hope, and I also hope people reading it can picture David Tennant as the Doctor, and are left with memorable moments and striking impressions of things… but I don’t think the book is ‘filmable’. Some of that is because bits of it would blow the budget or challenge the casting director, but, y’know, the new series is very good at performing miracles with those things. Mainly, it’s because it’s a novel. It concentrates on things novels are good at, like psychology and motivation and ambiguity and quiet, silent, gnawing moments and hidden, allusive meanings. Pretending you’re novelising an unmade TV episode and playing to the strengths of a different medium is a mug’s game.”

Lance has already spoken with fans about feeling especially proud about The Eyeless, and I wonder what’s made this project a particularly enjoyable one for him. “It’s a little different in that it’s going to be available in supermarkets,” he says. “It’s out on Boxing Day, the day after a squillion people watch the Christmas special. But I know that there are some people – a vanishingly small proportion, obviously – who are looking forwards to something I wrote almost as much as that. I know that there will be kids spending their Christmas money on it. It’s quite an honour to think that I’ve got a book that’s there to entertain both of those groups of readers.

This brings up an interesting point: some readers who enjoyed the New Adventures and Eighth Doctor Adventures have stopped reading the new series books, or have avoided them altogether, because they feel their family-friendly content is too diluted. “I’ve approached this book in exactly the same way as I’ve approached all my others,” Lance says, hoping to reassure anyone who has concerns about The Eyeless. “The rule of thumb Justin [Richards] gave me was ‘if they can do it in the telly series, you can do it in your book’. It’s pretty easy to tell Doctor Who stories without the characters swearing or showing you how to make crack cocaine. Anyone who can only think in terms of limitations and rules and stuff you can’t do shouldn’t be writing at all, let alone Doctor Who books.”

And even some of those naysayers are looking forward to the book – numerous fans online seem enthused about it purely because Lance Parkin’s name is on the cover.

“Pressure?” repeats Lance, when I ask how he feels about this. “No. I feel responsibility. This time, most people buying The Eyeless won’t even notice the author’s name, or who realise it’s the new one or whatever. I’ve written a book that I hope they will enjoy. It’s got lots of stuff in there that they’ll like. In the end, the books are selling something like four or five times what they used to. They’re getting to more people, and all the evidence is that they like what they’re reading. So any pressure is there, writing a book that they’ll like, knowing they won’t give me the benefit of the doubt because they liked Father Time.

“I certainly get the sense that there are people who loved the NAs and EDAs who don’t touch the New Series Adventures. When Human Nature’s on telly, it’s not as though those people aren’t getting their fix. If it’s a choice of a new telly series and a range of books the NA people really get behind and love… well, it’s the right way round as it is. But why’s that the choice? We can be greedy and have both, I think. If I can convince people that the NSAs have something for them, that’ll be great.

“I used to love it when the new NA came out. That buzz of going into a bookshop and seeing a white spine and it’s the new [Paul] Cornell one or Gareth [Roberts] one or Kate Orman one there on the shelf. I knew which shops put them out a couple of days early and went there on the off-chance. If there’s just one person out there who thinks the same of a new Lance Parkin book… well, that’s quite a warming thought. And if old gits like me can still get that feeling with an NSA, then that’s just dandy.”

That seems like a good point at which to wrap things up, but first I ask Lance for a sentence that appears in The Eyeless. And it’s a good’un:

The Eyeless will be released by BBC Books in December 2008.