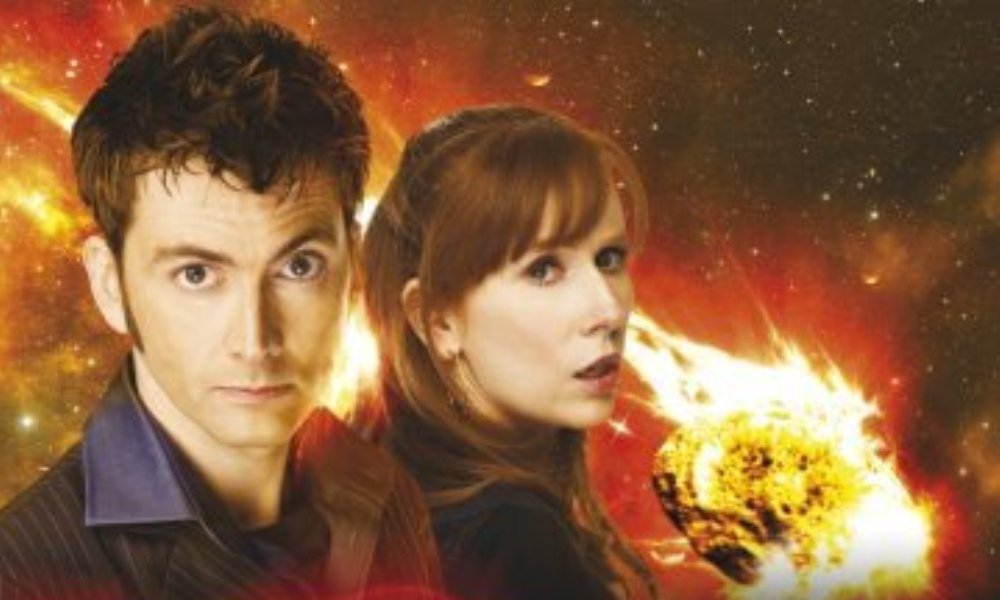 In the late eighties and early nineties, a group of Doctor Who fans began producing unlicensed audio dramas based on the TV show. The Audio Visuals, as they were called, starred Nicholas Briggs (now a regular voice actor on the TV series) as the Doctor, and some were produced by Gary Russell.

From these humble beginnings as a fan and amateur audio producer, Gary’s life has changed hugely over the years, but has always remained closely linked to Doctor Who. He edited Doctor Who Magazine for three years, and worked on the official range of Who audio dramas when Big Finish won the license for their production in 1999. He then left that role in 2006 to work in Cardiff as a script editor across the Doctor Who family of shows, specifically The Sarah Jane Adventures and Torchwood.

Today, Gary’s found time in his busy schedule to talk to Unreality SF about some of his work, and we begin with a discussion of his time spent with Big Finish. Having worked on the audios for so long, we wonder whether he misses them.

“Hmmm… sort of,” he considers, before adding with a smile: “There, I was Emperor of the World. Now, I’m… not. But that mad ego aside, not really. I’d done it for eight years and although I had plans till the end of 2008 (a majority of which will not come to fruition) for stories and the characters, it’s nice to step back and see how other people play with them. Obviously, I don’t always agree with those choices but that’s the joy of differing creative approaches. And anyway, it’s none of my business now and it’s good that they see different facets and ideas for those characters and stories.”

However, he seems not to regret many of the decisions he made at the company. “I always had the courage of my convictions, and you have to, to do that job,” he explains. “Back away, get influenced by other people and everything unravels. There are things I’d do differently certainly, but nothing I’d outright wipe out.”

When Big Finish first produced Doctor Who output, however, the world was a different place. The show hadn’t been on screens for several years, and there were not yet any concrete plans for it to return. When the series did bounce back in 2005, it was hugely different in tone and style, more action-packed and colourful than ever. But even though the expectations of a Doctor Who story have changed somewhat, Gary believes that the earlier Big Finish adventures still stand up to scrutiny.

“I think in a small subtle way they might have been an influence on aspects of the new show, Jubilee/Dalek aside,” he speculates, referring to the Sixth Doctor play that was adapted into a Ninth Doctor episode. “Look at the Doctor/Charley relationship and compare it with Rose/the Doctor. But then the audios are no more an influence than the books, comics etc., and indeed those things influenced Big Finish, Big Finish influenced books and comics in return, it’s all part and parcel of so many creative people playing with the same toys, albeit it in different sandpits.”

It’s clear that Gary’s still very proud of his Big Finish work – and rightly so – but he’s not interested in returning to write, direct or produce a new Who audio in the foreseeable future. “I wouldn’t go near Doctor Who now, no. I’ve directed a couple of Bennys and Iris Wildthymes since leaving and that’s great. And I’d love to get my hands on Sapphire & Steel, but that’s cos I love those characters and I love audio. But I’d not work on Doctor Who again unless I had the same level of totalitarian authoritarian despotic dictatorial control over everything again. And that ain’t happening…”

Audios aside for the time being, then, Gary’s name will also be familiar to readers of Doctor Who books. He’s contributed to both the Virgin and BBC ranges over the years, and out of four BBC Past Doctor Adventures, three featured the Sixth Doctor. Might that suggest Gary’s a particular fan of that incarnation? “I’m not a huge fan of any specific Doctor bar Third and Fifth,” he admits. “But I’m a huge fan of Colin Baker as a man and an actor. We’re mates and I always saw a potential in the Sixth Doctor that got a bit squandered on telly cos of… well, whatever reasons. So I always thought I would try and exploit that potential I believe exists within the Sixth Doctor in both books and audios. Ditto Mel (Bonnie is a vastly underrated actress) and I thought those couple of Doctor/Mel novels I did gave them both a chance to shine, undiluted by the costume/lighting/design shortcomings that represented eighties Doctor Who.”

Despite appearances by audio-originated companion Evelyn Smythe and comic characters Stacy and Ssard in his novels, some of Gary’s later stories suggested that the books, comic strips and audios all take place in separate universes, and shouldn’t be shoehorned into one cohesive timeline. “Cos I’m a bastard,” he offers, when we ask why he made that decision. “And because only an idiot truly thinks everything is completely reconcilable. And because it isn’t, you then start saying ‘I like this book but not this book’ or ‘I like this audio but not this one’ and I can’t get to grips with that. It’s my anally retentive Virgoan head. So, for me, books were one canon, audios another, comics another etc. The only thing that is sacrosanct to me is the TV series, 1963-89, 1996, 2005 to date.”

Gary’s involvement with the book and audio lines hasn’t ended with his move to Cardiff, however. “I approve everything fictional concerning Doctor Who,” he tells us. “Books, audios, comics, backs of toy packaging, non-fiction books about the stories, etc. Except my own stuff, someone else looks over that for obvious reasons! In the case of the Who and Torchwood novels, both BBC Ebury and BBC Penguin, I am involved in the selection of authors and ideas for stories etc. It’s a big part of my responsibilities up here.”

And, on the subject of his “own stuff”, Gary’s most recent book was a Torchwood novel released earlier in the year, called The Twilight Streets, which boasted the return of fan-favourite villain Bilis Manger. “Although I wasn’t involved in Series One, I loved the character and wanted to do more with him,” Gary says, “so Russell said yes to me doing a book about him, the fabby Cath Tregenna [who created the character] said yes, so off I went.”

In another interview, when asked whether he found fiction or non-fiction easier to write, Gary replied “Fiction! God, I hate it!”. If that’s the case, why did he return for Twilight Streets?

“It was Torchwood, and having script edited a nice chunk of Series Two and been involved with shaping that season from the outset, I really wanted to play with the characters myself. And you know, I really enjoyed it. So much that Justin Richards finally tempted me back to do a Doctor Who novel afterwards (not written it yet) about Donna and her family. Never thought I’d do a Who book again.”

Gary’s referring to Beautiful Chaos, a Tenth Doctor novel which was one of three announced a few days ago, due for release at the end of this year. Details about those books are sketchy, but Gary’s already shown his ability to write for the Tenth Doctor in a series of comic book adventures from IDW.

He explains how he became involved with those comics. “I believe I was a tiny but helpful cog in getting the license signed off in Cardiff cos I don’t think anyone here had ever heard of the company but I did, being a comic book freak and a fan of their CSI and Angel stuff. So I said ‘These are the guys to do this, it’ll be great’ and somehow someone said (the initials may have been RTD, I can’t remember) ‘Well, I hope you’re going to write it’ and then IDW asked and I said yes very very quickly. It’s an industry and medium I love passionately and would like to make much more of a career in. I dabbled as an editor and writer back when I was at Marvel UK, and have always been a reader. Fantastic Four 133, Thundra versus the Thing in Central Park kicked it all off for me (what’s that, 1973?). Been a buyer and hoarder ever since.”

So far, fan reaction to the series has been very positive, but Gary remains modest of his work. “Success isn’t up to me to judge, so I can’t say whether it’s worked but I hope I got David and Freema’s voice. Not sure the story is as sharp as I’d’ve liked, but I wanted to make an overall arc and have everything freestanding too, which is a tall order. My second run will be a more straightforward ongoing story in six parts and I think that’s more my forte. I have to say that as part of my Cardiff job, I’ve read Tony’s The Forgotten mini-series and how utterly brilliant is that? I’ve been picking up tips from reading his stuff and learning as I go. It’s always a learning curve going into a new way of writing but I want to keep practising and practising at this till I get as good as Tony.”

And, having created so many successful Doctor Who adventures in various mediums – “my fave will always be audio, but in terms of Who, my fave is comics,” he says – it looks like his work will continue to delight fans.

But right back at the start, when he worked on those unofficial fan audios, did Gary ever think that perhaps he’d end up where he is now? “Nah, course not,” he says. “Back then all I thought about was paying the mortgage and getting on the tube each day to make sure I got to the office on time. It’s why AV was so important, a creative release. But although it was manic and time consuming, it was never more than a hobby at the time. Going pro was just a pipedream we all had.”

And, if the call from Cardiff had never come, where would Gary be and what would he be doing now? “Still at Big Finish, definitely, although I had told myself that I had to be out by July 2009 at the latest as that would have been ten years of Doctor Who!”

As usual, we wind up by looking at Gary’s future projects. In an ideal world, he’d love to tackle Star Trek fiction some day – “Would I write a Trek novel? God yes. I love all Trek, but DS9 is my fave” – or to write in the universes of Star Wars or Wizard of Oz.

“[I’m] doing a couple more Sarah Jane novelisations,” he reveals, “but after that and the Who novel, I want a rest and just have the IDW work ticking over. Then one day I’ll turn up on Marvel US’s door and say ‘Right, I want The Fantastic Four or The Avengers please’. I would’ve added Captain Britain to that wish list but that rotten old Cornell guy’s doing that. And so much better than I ever could. Git.”