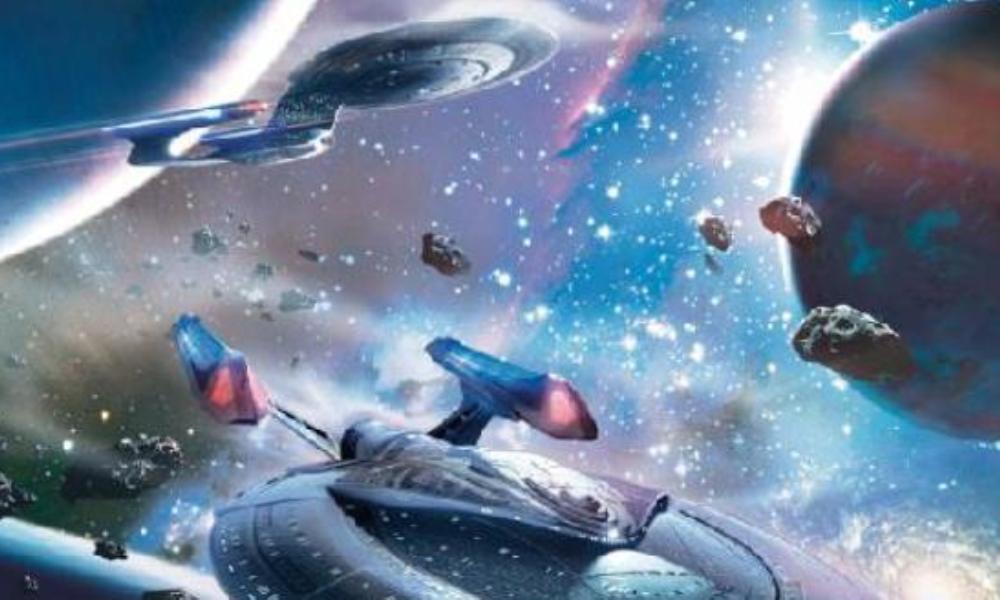 If you read a wide variety of tie-in novels, you’ll probably associate David A. McIntee’s name with Doctor Who. Since his first Who book (White Darkness in Virgin Books’s New Adventures series) was released in 1993, he’s written 12 novels and two audio plays based on the series. More recently, he crossed over to Star Trek fiction, with a short story published towards the end of 2007.

However, his preferences as a child were the other way around. “At first I watched Trek rather than Doctor Who,” he reveals, as Unreality SF’s interview with the author begins. “[Doctor Who] was always on, of course, when I was growing up, but I was never a regular Doctor Who viewer until Leela joined.”

Explaining how he became involved with the show’s novel line, McIntee tells us that he “always wanted to be a writer”, and that he pitched some stories to the television series at the end of its original run in 1989. Sadly, the cancellation halted his attempts. “Then, when I saw in a Doctor Who magazine that there were going to be novels, I knew I had to give it a go,” he explains. “So I started pitching ideas, with some samples, and got lucky on, I think the second or third try.”

As a writer, what does McIntee see as the “gold standard” for top-notch Doctor Who storytelling? “The Fourth Doctor’s era, any episodes by Robert Holmes…,” he suggests. “Talons Of Weng-Chiang is my favourite. In the current show, any of the Steven Moffat episodes are definitely the gold standard.

“Book-wise,” he continues, “the original Dr Who in an Exciting Adventure with the Daleks (David Whitaker’s novelisation of the second TV story) is the one to beat. In terms of the novels from Virgin and the BBC – generally your Lawrence Miles, Andy Lane, Jim Mortimore, Gareth Roberts etc are what I look out for.”

McIntee’s Doctor Who back-catalogue features stories that stand out for a number of different reasons. For example, Sanctuary was a rare “pure historical” tale with no alien involvement, First Frontier brought back the Master after his appearance at the conclusion of the original series, and The Dark Path acts as that villainous Time Lord’s first chronological appearance in Doctor Who mythology. Perhaps he is particularly drawn to writing adventures that break away from the traditional format, or tackle an especially special subject?

“More the subjects than breaking the format,” McIntee considers. “The Doctor Who format is kind of paradoxical in that it’s hugely variable and flexible, yet still tempting to try break the rules.

“Having said that,” he elaborates, “I’ve more a reputation for ‘trad’ books than the format-breakers, but I think that’s as much because those are the ones the editors have been more likely to trust me with…”

The “event” elements of the novels mentioned above were, he explains, “things I just outright wanted to see in the books. The only times I’ve have requirements dictated have been with the Big Finish audios I’ve done.”

I wonder what, then, drew McIntee to the character of the Master, and in particular the opportunity to fill in some gaps in his complex backstory. “He’s just cool!” he grins. “Also, villains are more interesting to write – you can mess around and make a villain do something good or likeable without ruining him (because the audience will wonder what he’s up to, or whatever) – whereas you can’t have a hero do random evil without fundamentally changing him and the audience’s view of him.”

As someone who’s worked so hard to add to the Master’s character over the years, McIntee must have been thrilled when the character returned to the new run of Doctor Who last year, in a dramatic trilogy of TV episodes. John Simm played a madder-than-ever-before incarnation of the Time Lord, and McIntee enthusiastically describes him as “perfect! The Master should always be the anti-Doctor, equal but opposite. [The original Master, Roger] Delgado did that in the Pertwee era, being suave and charming opposite Pertwee, and Simm was a suitably hyper opposite to Tennant’s energetic Doctor”.

Away from the adventures of the Master, McIntee also brought back popular companion Sarah Jane Smith in his novel Bullet Time – five years before the new series did so in School Reunion. “She’s the best companion ever, and deserved a blaze of glory,” says McIntee on the reasoning for her return alongside the Seventh Doctor. “And also she’s the ideal symbol of ‘proper’ Doctor Who compared to the Seventh Doctor, who’s a bit, well, un-Doctorish…”

School Reunion suggests that Sarah Jane hadn’t had any contact with the Doctor since he dropped her off in his fourth incarnation, which some have argued is a contradiction of Bullet Time. Is that frustrating? “Even if Bullet Time was contradicted, no – it’s a show about time travel and changing the past, so what the hell. In any case, Bullet Time has an ambiguous ending with two possible outcomes – School Reunion merely decided which it was. (She wore the bulletproof vest mentioned on Page 83 or thereabouts, and faked her own death until the heat cooled off!)”

With a dozen Doctor Who novels and a pair of audio plays under his belt – “I thought I might do two or three – never in my wildest dreams, or worst nightmares, did I imagine doing that many!” – McIntee is one of the series’ most prolific authors. Looking back, he selects Sanctuary, Face of the Enemy, and The Eleventh Tiger as the books he’s proudest of. Would he return for a Tenth Doctor novel if the offer was made? “It’s five grand up front, of course I would! Also, I still have one unfulfilled Doctor Who ambition – to write for the Daleks. Having said that,” he considers, “my style would probably be more suited to a Torchwood book.

“I love writing for the Master,” enthuses McIntee when I ask which characters are the most enjoyable to write, given the huge range of Doctors and companions his work has encompassed,  “but I was surprised to find that the most rewarding and challenging one is the First Doctor – there’s so much depth there!

“The Eighth was challenging on a different level, because there was only about 40 minutes’ worth of him at the time. And the Third is surprisingly disappointing to write – he’s got a lot less depth, what you see is what you get.”

But it’s his recent venture into the Star Trek universe that’s garnered McIntee a legion of new fans. Given his long-term interest in the series, it’s a surprise (and a shame) that it’s taken so long for this crossover to occur. However, his first attempt to break into Trek lit was in 1999, with a successfully-pitched Star Trek: Voyager novel which was then cancelled, due to “a problem with the licence and some rules the licensors had at the time”.

“It was about a planet with a limit of one child per family,” McIntee recalls, “where excess kids were being sold to another planet. Everybody got something important to do.”

But finally, eight years later, On the Spot made it to print as his first official Trek tale. “I mailed Marco Palmieri on the off-chance that there were openings,” says McIntee of his return to the Trek table, “and he sent me the details on The Sky’s the Limit, and that he was looking for interested folks to send in a few short ideas. So I sent in five, and he liked that one.”

The post-Nemesis life of Data’s pet cat isn’t the most obvious starting point for a story, though… “It just seemed to me to be something that no-one else competing for the slot would have thought of!” McIntee says, detailing the reasoning behind his choice. “And I have four cats, so I knew I could handle Spot!”

A number of reviewers and fans online have expressed a desire to see him return to the Star Trek universe as soon as possible, and McIntee is happy to reassure his readers that “there are a couple of things in the works”.

What kind of Trek tales would he particularly like to tell? “Ones that I can’t talk about, mainly,” he says mysteriously. “Though I will say that I found (in On The Spot) that writing for Geordi was more interesting and rewarding than I expected, and I think he came out better than I expected, so I wouldn’t mind doing some more about him someday.”

So, it looks like the jump from the TARDIS to the Enterprise has been a successful one, and there’ll be more from this popular and talented writer in the not-too-distant future. In the meantime, where else can readers get their McIntee fix?

“Well, I’m writing Ray Harryhausen’s Jason and the Argonauts comics for Blue Water,” he tells us. “The Kingdom Of Hades five-issue mini is running at the moment, and the trade paperback comes out in July. Then in September it goes to an ongoing monthly title.

“I’m also in the middle of writing Twilight of Kerberos: The Light of Heaven, a sword-and-sorcery novel which comes out from Abaddon in January. And one or two other things that, again, I don’t want to jinx!”

The Sky’s the Limit was released by Pocket Books in October 2007.