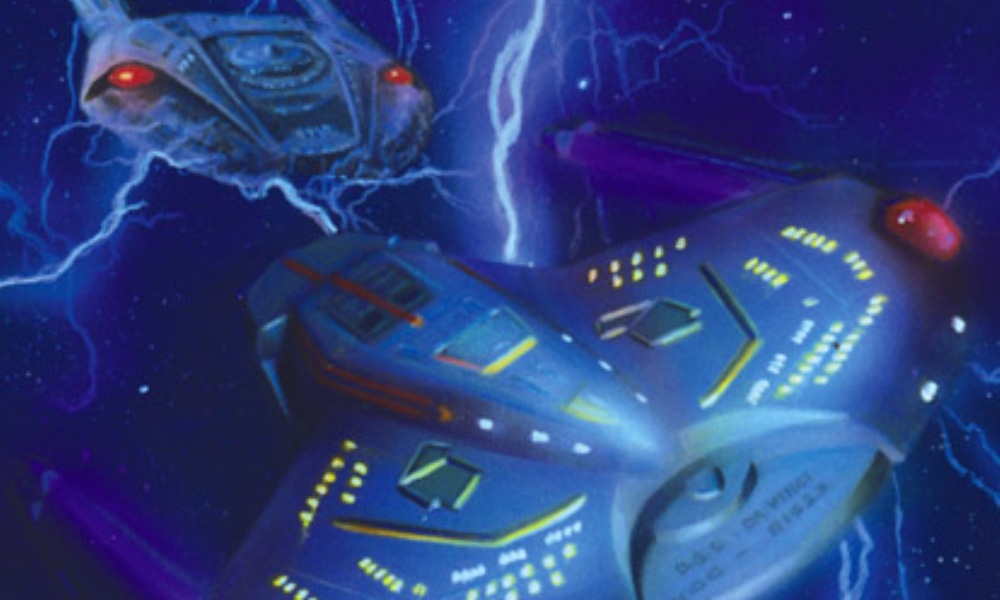 The Yorks start off the book with their novella Enigma Ship, where the crew of the U.S.S. da Vinci is sent out to investigate the disappearance of several ships and encounters a ship which is a lot different from how it appears at first. The story itself is good, in the end even very good, but the writing style is a little bit repetitive.

To start with the positive: Although at first you could think that it’s just another “strange alien ship” story, in the end it is an innovative and interesting story about high advanced holotechnology. And through the problem with the paranoid captain, the story gets another twist in the second half. Two other things I liked about Enigma Ship were that Soloman got a little bit of development, and the Corsi and Gold B-plot. I know it’s hard to implement much character work in such a small number of pages without hurting the actual story, but here it’s done quite well.

The major negative point I found while reading was that the writing style is a little bit repetitive, certain parts read alike. One extreme example is Stevens is using the exact same phrase two times in the story – “Somebody named Scott once told me to always pad my repair estimates” – first used on page 48 in a conversation with Gomez, then later on page 86 in a conversation with Gold. One other thing I found a little bit strange was that although no one of the mutineers knows what Section 31 is, nonetheless Gomez performs a pretty convincing Sloan impersonation.

Next in line is War Stories by the series’ co-creator and editor Keith R.A. DeCandido, which was previously published as an eBook two-parter. Here we get a look on what some of the crew of the da Vinci were up to during the Dominion War, when an old nemesis of the crew is investigating their adventures during that difficult times.

It’s a very good assembly of short stories about the activities of some of the da Vinci’s crewmembers during the War. I liked Tales of the Dominion War, and this is some kind of Tales of the Dominion War: da Vinci Edition. And since it was published in eBook format way before TotDW, maybe it was even the inspiration to do something like that on a greater scale. In these stories we get a look on some things which were only mentioned briefly in previous stories, for example we see one of the tricks Gomez pulled out of the hat during the war, and we meet Faulwell’s partner Anthony Mark. It’s a shame that the Vulcan first officer was killed later and isn’t around anymore in some position in most of the other S.C.E. stories, as I liked him. He was Vulcan without being annoyingly Vulcan, if you know what I mean.

One thing I think wasn’t necessary is the Androssi frame story: it does no harm, but it doesn’t do any good either, because so far I don’t see Biron and the Androssi in general as a credible nemesis for the da Vinci. Maybe that’ll change if the story and the Androssi are picked up later in an more elaborated way, but for War Stories I would’ve preferred another da Vinci story over the frame story we got. Maybe one directly focusing on Duffy would have been nice, given his fate in Wildfire.

All in all, the flashback technique works fine to not only present some interesting stories, but to enlarge our knowledge about the background of some of the characters and show us some previous crew members. War Stories is definitely one of the highlights of the S.C.E. series so far.

The paperback concludes with David Mack’s Wildfire two-parter. When the U.S.S. da Vinci tries to stop another ship’s wreckage from dropping in the atmosphere of Galvan VI they are presented with two diffculties; the U.S.S. Orion has a highly dangerous experimental device on board which could very well force the gas giant into a catastrophic transformation of the ship is alloed to crash on Galvan VI, and even more disturbingly the crew discovers that the gas giant actually is inhabited.

I hate to sound like a little fan boy, but that man is damn good. Wildfire is, in my opinion, the highlight of the S.C.E. series up to this point. David Mack was able to put so much in the story that you at first can’t believe it was only 180-odd pages long. As usual, he gives us a nice mix of character-related scenes and action sequences, and both are written very well. Many people die in this story, but you never have the feeling that Mack let them die just because he can do it; quite the opposite, as every death has a meaning and story behind it. At the end of the book you will be very eager to see how the crew of the da Vinci will deal with the death of their friends and loved ones in the months (and stories) to come.

One other positive thing I found was that many of the characters get at least short scenes focusing on them, so we see various reactions to the destruction happening to the da Vinci, one scene that I liked especially was the scene with Faulwell and Abramowitz searching for useful items. All in all, Wildfire is a very powerful and dramatic story and another sign what a great talent David Mack has for writing.

Overall, Wildfire is a very good collection of stories and the most significant and important paperback of the line. The events of the Wildfire two-parter shake up the very foundations of the series and creates a lot of interest in the aftermath of the destructions and deaths of the Galvan VI incident.