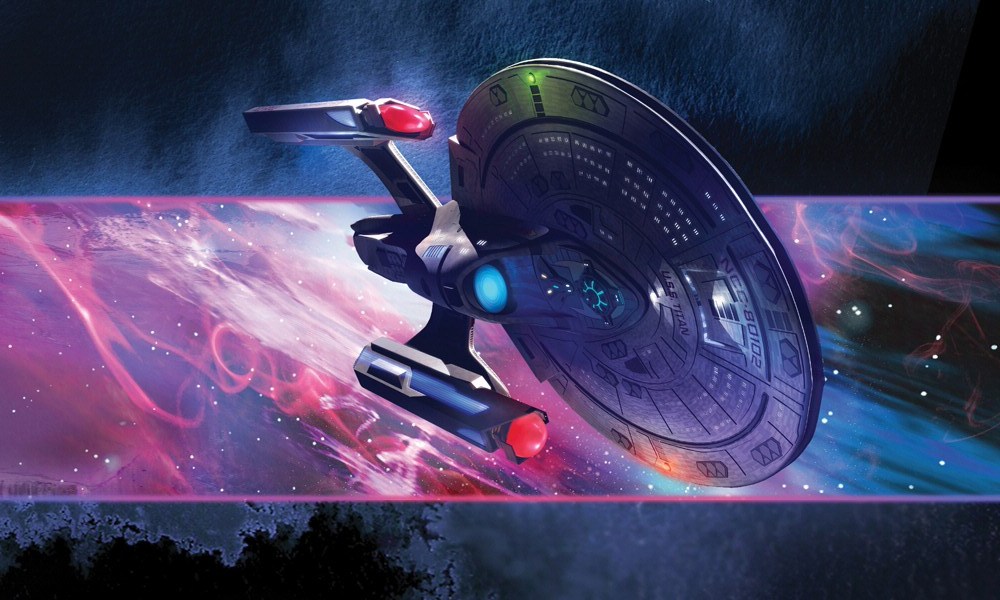 Sword of Damocles is the fourth book in the Titan series, and was written by first-time novelist Geoffrey Thorne. When the Titan is hit by a strange pulse, the ship loses its ability to use the warp drive and is stuck in a hostile environment. They soon discover the origin of the pulse, but the discovery presents a new problem to Captain Riker: should he break the Prime Directive to save his crew or not? On top of all that a schism is widening between him and his diplomatic officer, who happens to be his wife. A risky plan is set into motion, ultimately leading to a very important decision Jaza, Titan‘s science officer, makes: leaving behind the life as he knew it, to protect and guide a race he barely knows.

Sword of Damocles is an utter disappointment, especially after the great Orion’s Hounds. I was never overly impressed with Thorne’s short stories I’ve read, but while those were at least in the acceptable category, Sword of Damocles was very tiresome to read. The only things remarkable about Thorne’s extremely bland writing style is his tendency to be repetitive and an overly florid choice of words, especially in the first few chapters. No part of the novel was able to captivate me at any point, neither the Vale parts in the beginning, nor the main plot about/on Orisha. The whole Riker/Troi subplot looks childish, especially once we hear what it’s all about; the Prime Directive stuff is brought up, just to be mostly ignored for the rest of the story with the exception of being mentioned on the side; and the parts about Orisha, while being the most intriguing portion of the novel, are still only mildly interesting.

I’m not sure I like the fact that the whole faith stuff is swapping over from Deep Space Nine, where it fits very well, either. Pocket Books and its authors and editors should be careful not to typecast the Bajorans by concentrating on their faith so much in my opinion.

The characterisation is another part where the novel is lacking. Granted, there is a bit of development for some of the characters, but overall there wasn’t as much as I would expect from a novel. Like I said above, the whole Riker/Troi schism looks a bit childish, and as a result of this I have problems with Thorne’s characterisation of the two in some parts of the novel, too, because I just can see them behaving like they do. The rest of the characterisations are okay, but nothing special, he shows them consistent with previous appearances, but he brings little new to the table for most of them. That’s especially disappointing since the Titan‘s crew has a lot of potential, but Geoffrey Thorne wasn’t able to even scratch the surface of it.

Overall Sword of Damocles is one of the weakest novels of the last few years, and a major setback for the Titan series quality-wise. It might be hard to directly follow a book like Orion’s Hounds, and I hadn’t thought that Thorne would be able to reach the same level, but that nothing about the novel is able to stand out positively is very unsatisfying – even the better parts of the novel are only average. I can just hope that whoever is chosen to write the next instalment will be able to bring the series back on track.

Sword of Damocles (by Geoffrey Thorne) was released by Pocket Books in November 2007.