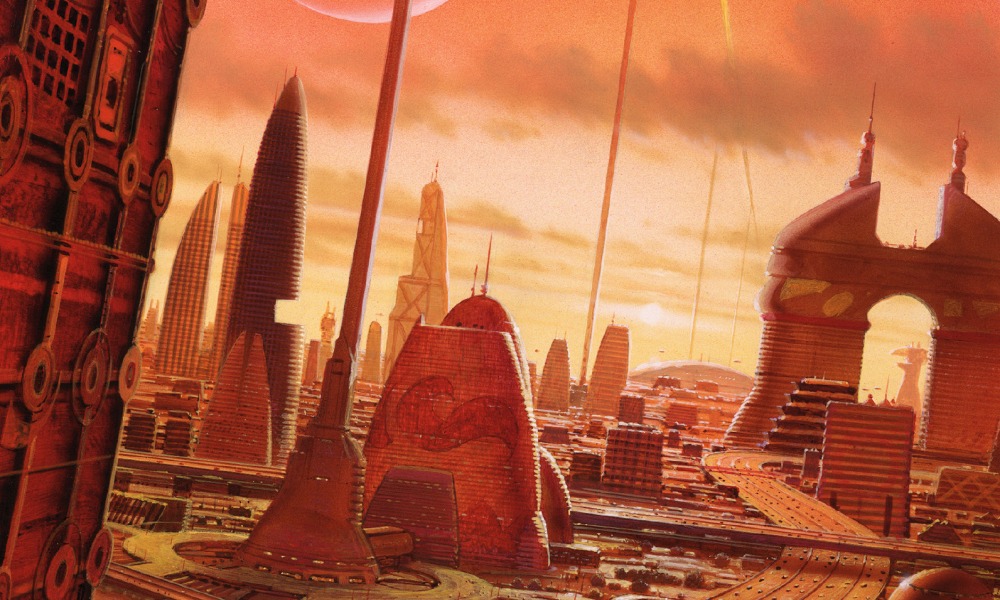 Allyn Gibson opens the collection with Ring Around the Sky, where the da Vinci‘s second officer Tev returns to the Tellarite colony world he lived large parts of his pre-Starfleet life. And as if the engineering problem of saving the ancient space elevator and space station system they inherited from a long-evicted race wasn’t enough, the crew has to go the extra mile to convince the colonists that the idea of how to do it is actually their own.

Ring Around the Sky is a good opener for the book, as it showcases once again the strengths of the Corps of Engineers series: combining an intriguing story with good character work. In this case much of the character work is for Tev, whose character gets a whole new layer when we learn about his past and the sacrifices he made during his life. The only minor quibble I have with the characterisation is that the Tellarites as a race are a bit too polite in the story for my taste. The engineering problem about the ring and the elevator is very interesting and creates a nice background for Tev’s character-driven plot. Little things like using the Furies as the ring’s constructors instead of inventing yet another new race are what making this story even more enjoyable.

In Orphans, written by Kevin Killiany, the da Vinci crew has to team up with the Klingon counterpart of the Corps of Engineers to stabilise a generation ship on course to the Klingon homeworld. While the repairs of the outer hull go smoothly, the away team on the inside has to deal with a medieval culture unaware of the true nature of their “world” and the dangers that come from it, their only sign for problems is the death of all their newborns.

Orphans is a decent story. There are many different things going on, and maybe that’s one of the points preventing it from becoming something special. In the end I had the feeling that some of the plots didn’t have the chance to really work out and everything was a bit rushed to come to a conclusion. The different story strings concerning the several parts the away team has been split into all have their merits, but they just don’t really get the chance to form a coherent bigger picture. The people’s culture gives the story an interesting fantasy-like feeling and is definitely one of the positive things about the story, but like other parts of the story it got too little attention for my taste. The characterisations of both the original and the known characters are good, although I’m not sure that there’s much development for the regulars.

By the way: don’t be fooled by the fact that I criticised so much in this review, that’s more of a sign that I saw great potential in the story and showing my disappointment that Orphans is “only” an okay novella instead of a good to very good novel/two-parter it could have been if the story had have some extra room to develop. But even as it is, Orphans is still a nice and entertaining way to kill some hours.

Grand Designs, the story giving the paperback its name, is next. It was written by S.C.E./CoE veterans Dayton Ward and Kevin Dilmore and shows the crew of the da Vinci in an unusual role: they have to act as weapons inspectors on a world petitioning for a Federation membership which stands at the brink to war with one of it colony worlds, a world with a strategic interest for the Federation. And just when Captain Gold thinks the situation couldn’t get much worse he has to take a personal hit.

It’s another nice tale. The contemporary story (at least at the time of the first release) works surprisingly well in the Star Trek universe, and has an interesting build up. The background of the original agreement between the two worlds is one of the small things I would have liked to see more about, but I guess that was not the intended focus of the story. The characterisations are good, although I regret that Tev was assimilated into the da Vinci group so fast, since I hoped that he would remain an antagonising figure for longer than he did. But that’s something which seems to be a series-wide decision so you can’t blame the authors of this story. Since I like it when there’s a certain tension between the main characters of a series  I hope that at least the schism between Gomez and Gold will have a pay-off.

David Mack contributes Failsafe to this collection. In this story Gomez, Stevens, Abramowitz and Hawkins have to get hold of a Starfleet probe which crashed on a world protected by the Prime Directive. Robbed of most of their advanced technical devices Gomez, Stevens and Hawkins get heavily involved in the horrors of a traditional ground war, while Abramowitz, injured after a rocky transport on the planet, is picked up by a group of fugitives.

Failsafe is a good story and the strongest of this paperback. It has a lot of dark and gritty scenes, but also enough scenes to lighten the mood a bit and prevent it from getting too depressing. One prime example of this would be the interrogation scene with Hawkins, where he manages to totally confuse his interrogator. Action-packed scenes are certainly one of Mack’s strengths, but some of his more subdued scenes, like those with the teen soldiers, especially the scene where Maleska encounters them or Gomez near-death experience, are on par with – if not even more powerful than – those. The characterisations of the regulars are very good and some of the original characters are (almost) stealing the show. Overall, a powerful (anti-)war story and another good example for Mack’s talent to write interesting and engaging stories.

In Bitter Medicine, written by Dave Galanter, Doctor Lense has to deal with a teenager who’s the only survivor on an alien ship. Driven to cure the boy, who is a carrier of a deadly virus, Dr. Lense works day and night, but the longer she’s working on it, the more it seems as if she won’t be able to do so.

This is an okay story. It’s very solidly written and definitely features very good character work for Lense, but it was slightly boring. Not every story has to have action or suspense, but this one has nearly none of either and would certainly have benefited from a B-plot where a little bit more was happening. Another thing I would have liked to learn more about is the boy’s people and what lead to the virus. There is some of that in the story, but I think it could have been interesting to see more. Overall, a story important for the Lense character, but seen as a stand alone it’s lacking a bit.

The final novella in this compilation is Sargasso Sector, written by Paul Kupperberg. The da Vinci is sent to a region of space nicknamed Sargasso Sector to pave a route for a colony convoy through the huge starship graveyard that has formed there as a result of the forces of several anomalies. But what begins as a mission which promises to be of great interest for several of the departments of the da Vinci, soon turns into a series of freak accidents.

Sargasso Sector is another decent story. But in contrast to Orphans for example, where the many plots weren’t given enough room in my opinion, I feel that the basic story of uncertain statistic probabilities wasn’t fully able to carry this novella. The idea behind it is very interesting and Paul Kupperberg did a good job in making the reader understand it, but in the end the story is a bit single-minded, there’s a whole “graveyard” of alien ships out there but the story only shows us this one ship. It might have been interesting to see a collection of semi-connected stories featuring different teams working on/examining different ships in the Sector.  But like with basically every other novella in this collection you can’t go wrong with this one either when you’re searching for a way to spend some time.

Overall, Grand Designs might be lacking a story of Wildfire calibre, but nonetheless this collection would be one of those I would recommend if somebody asked me which one they should pick up if they want to see if they like the series. Why? Because beside the fact that all stories have their individual merits, this compilation is a nice example of the diversity of the series. Almost every story features something different from the one before it and I think this paperback shows very clearly that CoE is much more than just technobabble, a fear many have at first when hearing about the series concept.