Torchwood: Something in the Water review 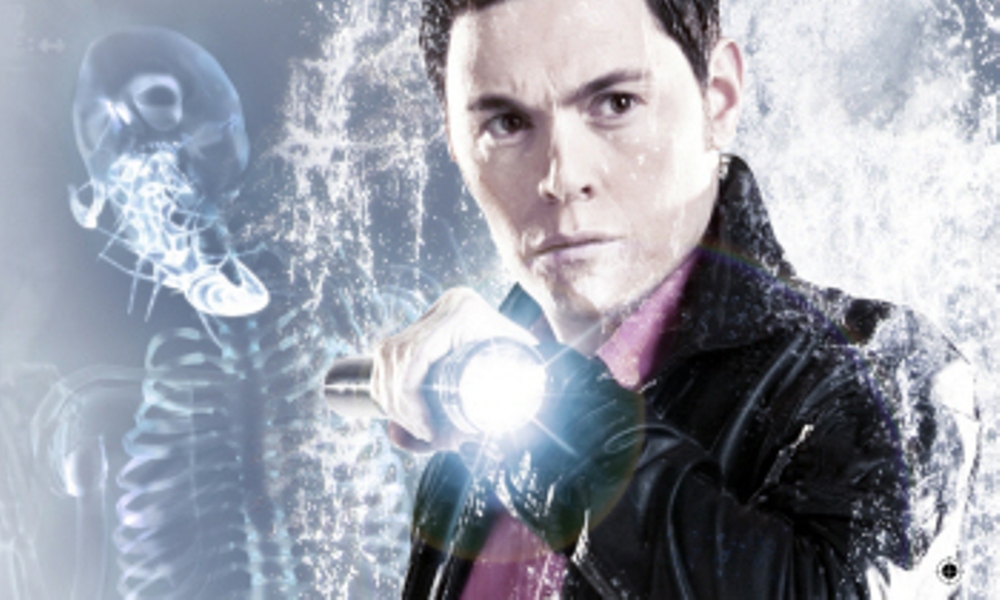 A mysterious flu epidemic is sweeping Wales, and when corpses start turning up who resolutely refuse to stay dead, Torchwood must do everything they can to save the earth from an insidious alien invasion. Coupling ancient myths of water hags and grindylows with the most modern of technobabble (chronon discharge?), the team have to utilise all their skills: chasing leads, conducting scientific research and finally going in, all guns blazing.

Something in the Water, a Season Two-set novel by Trevor Baxendale, begins with a window into everyday life at Torchwood, with a night of Weevil-hunting and ghost investigating. But stranger things lie ahead, and as the body count rises team Torchwood have to resist falling victim to alien flu long enough to discover – and stop – what is going on (a hilarious reveal that harks back to Jack’s monologue in Everything Changes – apparently fanficcers were not the only ones to embrace the idea of mpreg). This book has not only humour, but plenty of gripping action and fight scenes, and a cohesive plot.

The characterisation is strong, albeit a bit one-note at times. Jack’s portrayal is closer to his original Doctor Who incarnation, and is every bit as flirtatious, sexy (did Ianto avoid that threatened spanking?) and wise-cracking as fans who first fell in love with him in The Empty Child could wish for, with little sign of his more recent dark angst. Ianto is underused, for the most part reduced to the role of cleanliness-obsessed tea boy – barring a rather badass appearance in the culminative battle – although he has a nice line in dry sarcasm and his growing self-confidence is evident. A brash and bitingly sardonic Owen teases and flirts his way through interactions with the rest of the team, especially with Toshiko, but shows his deeper side as he juggles his Torchwood duties and his doctor’s sense of responsibility to heal the sick. The female characters feel somewhat less fully developed: Toshiko the stereotypical science geek entirely devoted to her job and to saving the world with brain and not brawn; Gwen dedicated and resourceful but still caring, and spunky enough to verbally spar with Owen (some nicely underplayed residual tension harking back to their past affair). One of the most enjoyable elements of this book is the excellent team dynamic, and the banter and clear strong bond between them. One scene in particular shows a wonderfully light hearted bonding moment between Gwen and Tosh, a sign of a friendship glaringly missing from the show itself.

The secondary characters are well-developed and given adequate space and time to establish themselves. Protagonist Doctor Strong comes across as very human and likeable and the reader really empathises with his struggles. The antagonist, a striking, sharp-talking water hag is in the model of the classic sci-fi villainess, both sexy and genuinely scary, but with enough backstory and motivation to be fully rounded and not entirely unsympathetic. Rounding out the secondary characters is elderly historian Len, who has a tantalising history with Jack, and the conclusion of his storyline is unexpected and shockingly sudden.

The novel is very much a self-contained story, but references other episodes (apparently Dead Man Walking was not an anomaly – Torchwood really do use Google as a primary tool!) and wider elements of the Whoniverse, such as the Torchwood-UNIT rivalry, and the “missing planets” theme running through Doctor Who. There is some poignant foreshadowing for the Season Two finale. It also answers several questions about Torchwood practises (yes, they do keep spare clothes in the Hub, have more cars than the SUV, and Gwen is not the only one expected to put in time on the firing range).

There are a few minor errors (such as a doctor strangely believing a flu vaccination can act as a cure for flu once you have it, and Gwen and Toshiko’s shock when approached by someone who knows the name Torchwood, despite the fact they had been loudly making up a song about Torchwood immediately before – how I hope this is an intentional meta reference to Torchwood’s status as the world’s worst secret organisation, a la Kiss Kiss Bang Bang‘s “Bloody Torchwood”) and a slight pacing problem in places. The final face-off between Gwen and the water hags in particular seemed to go on a little too long. And beware the squeamish – several scenes are quite gory, and there several rather vivid descriptions of the affects of the alien “flu”. But these are minor quibbles and do not detract from an overall hugely enjoyable novel.

No complicated time travel, no flashbacks, no major character revelations – Something in the Water is a solid monster-of-the-week story that sees team Torchwood simply doing their job: investigating and stopping an alien threat.

Something in the Water (by Trevor Baxendale) was released by BBC Books in March 2008.