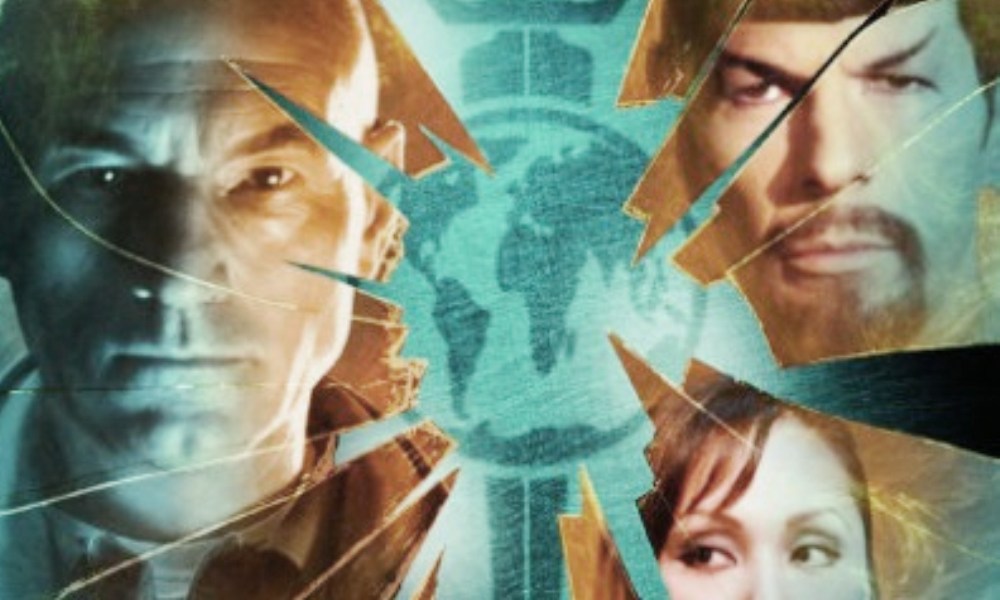 Glass Empires is the first half of a duology set in the Mirror Universe, and it features three novel-length stories starring twisted versions of familiar characters.

The first story is Age of the Empress, by Mike Sussman with Dayton Ward and Kevin Dilmore, in which we see the fate of Empress Hoshi Sato after she seized the throne of the Terran Empire in the Enterprise episode In A Mirror, Darkly. To preserve her power she has to forge some uneasy alliances and has to trust a person she always thought of as her enemy in a fight against a person near to her.

Age of the Empress is an average short novel. It adequately continues the Enterprise episodes, but that’s where the first problems begin. It just features more of the same and brings little new to the table in my opinion. And things that I would have liked to be described more intensely were cut relatively short, like the uneasy truce between the three Enterprise officers Reed, Tucker and Mayweather. The writing and the character work is strong, but overall the “been there, seen that” feeling I had while reading most of the story prevented a better rating.

The book continues with with the Original Series entry The Sorrows of Empire, written by David Mack. Like the Enterprise story it shows the aftermath of a TV episode, in this case Mirror, Mirror. The Kirk from the other universe has challenged the Mirror Universe’s Spock to change the illogical and doomed Empire. Spock agrees with the man’s assessment and puts a plan in motion that spans decades and will ultimately change not only his life, but the fate of a whole Empire.

The Sorrows of Empire is the best and most epic of all the Mirror Universe stories in the two volumes. Despite the fact that we all already knew the fate of Spock’s Empire, David Mack was able to spin an intriguing tale about the history of the time between the TOS episode and the fall of the Terran Empire. One minor quibble I have with the story is that Spock’s plans are functioning a bit too perfectly for my taste. No matter how intelligent the guy is, such a rate of success (or wanted failure if you will) is stretching credibility a bit in my opinion. But beside that the story once again shows Mack’s talent and that he certainly is more than “Mack the Knife” or “The Angel of Death”.

The volume concludes with the TNG entry, The Worst of Both Worlds, by Greg Cox. In the Mirror Universe, Luc Picard isn’t commanding a starship, here he is a fortune hunter working for a Cardassian Gul named Madred. He never resists an order, until he hears about a mighty alien race able to defeat the Allaince by his former squeeze Vash and the old scientist Soongh. If he had known more about the Borg he might have resisted the urge to join them in their search.

If the TOS tale was the most epic of the six tales, this one probably is the most insignificant in the bigger picture. It’s a decently-written tale and like the title suggests, it’s the Mirror equivalent of the Borg two-parter. When the episode was made the Borg still were something relatively new, but this story brings to little new to the table to be something special. And that Picard is basically stopping the Borg on his own stretches credibility a bit. Overall a story that certainly is a nice enough read, but isn’t one that you’ll remember for long.

Age of the Empress rating: 65%
The Sorrows of Empire rating: 83%
The Worst of Both Worlds rating: 68%