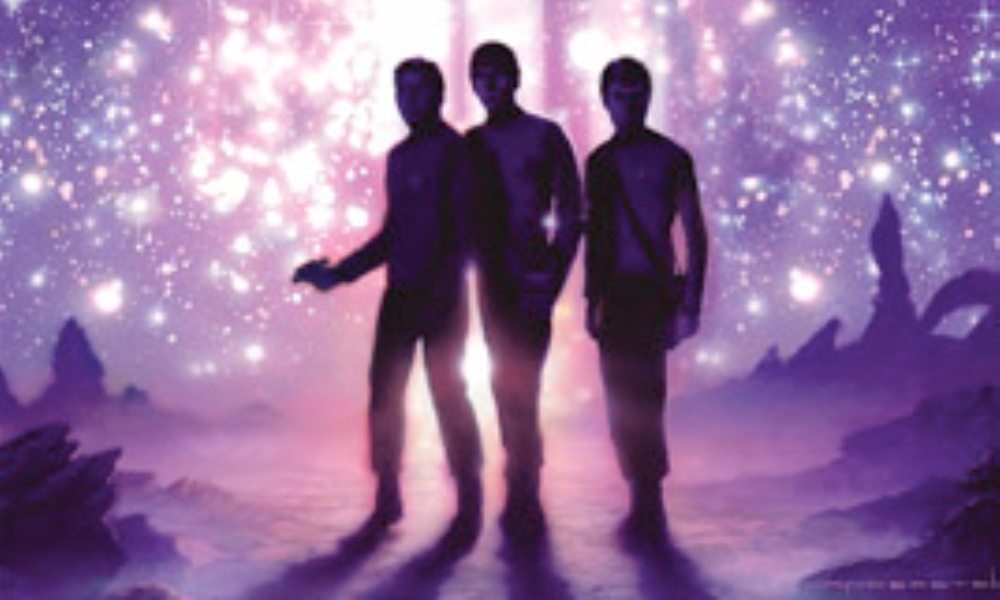 Constellations is a short story anthology celebrating the fortieth anniversary of the original Star Trek series. Like all the anniversary anthologies, it is edited by Pocket Books’ senior editor Marco Palmieri. It features thirteen short stories, written among others by Howard Weinstein, Christopher L. Bennett and Dave Galanter.

After an introduction by David Gerrold, where he talks about the influence of Star Trek in general, and also about the stories at hand, the anthology kicks off with Dayton Ward and Kevin Dilmore’s entry First, Do No Harm, which deals with a breach of the Prime Directive by one of Doctor McCoy’s friends. This is a solid short story. The execution of it is good, as always when Ward and Dilmore write something, but the story itself brings little new to the table regarding the Prime Directive. That’s sad, because the story shows that the two have a good grasp of TOS and its main protagonists, but in the end there’s not enough meat to the actual plot to justify a higher rating. I think I would have liked this story more if they had added a broader view on the problem of the accidentally breach of the Prime Directive instead of focusing on the personal level.

The Landing Party, written by Robert Greenberger is a story about Sulu’s first command of a landing party after his transfer to bridge duty – another solid tale. It shows the early stages of Sulu’s way to the Captain of a starship and does so well, at least in the parts after the actual landing party. His conversations with McCoy, Rand, Kirk and Spock do a whole lot more for the character development than the action packed part which isn’t really that original in my opinion.

Star Trek veteran Howard Weinstein pens the third story, Official Record. It’s a story focusing on some hard decisions Pavel Chekov has to make. It’s a good story, and it’s nice to see that Chekov, a character often underused and undervalued, is the focus of the first above-average story of the anthology. Weinstein was able to connect a very character-driven story with a contemporary topic and make it a very engaging read. My only real nitpick is that Chekov remains a little bit too passive after his initial try to stop the torturing.

Next up is Jeff Bond’s fiction debut Fracture, where we see Kirk and the Enterprise deal with both the Tholians and one of his childhood heroes. Another good story: in this one we get a different look on the Tholian society than in most of the other stories featuring them so far. One thing which prevents the story from becoming really outstanding is the rather predictable and stale character of Commodore Merrill. Even before he actually appeared, i.e. after hearing that he is one of Kirk’s childhood heroes, I feared that he would be this story’s equivalent of the mad/unreasonable admiral/ambassador and he is to some extent.

After that, Stuart Moore’s story Chaotic Response shows Kirk and McCoy’s effort to help a comatose Spock. When I read the opening paragraphs I thought we would get a look on Spock’s youth on Vulcan and after realising it was only a memory/coma vision of him I was a bit disappointed. After that, the story never really was able to get my full interest back. One of the main reasons for this is that the characters, especially Kirk, behave irrationally. As much as he cares for Spock and appreciates his input, I doubt that he would put the ship in danger by possibly incapacitating both parts of the commanding duo at the same time. And why McCoy goes along with Kirk’s reasoning that he needs Spock advice on the bridge only to forbid Spock to go to the bridge after his rescue (even when he doesn’t need it in the end) is another illogical part of the plot. Only the basic idea of showing the inner workings of a comatose patient rescues this one from becoming a less than average story.

As Others See Us is Christopher L. Bennett’s contribution to the anthology. Here we see the Enterprise crew meeting a consortium with a different first contact approach, and it gives us the first very good and somewhat outstanding story of the anthology. By adding layer after layer of “watchers” Christopher Bennett shows the inherent arrogance of laws like the Prime Directive and the arrogance of so-called advanced races in general, although the last revelation was stretching the “gag” a bit in my opinion. The other point the story brings to the table is that influencing a “lower” society doesn’t automatically means to destroy it, another rupture in the shell of the Prime Directive. In my opinion As Others See Us is by far the more intriguing and insightful of the two Prime Directive-related stories in Constellations and the second best story of the anthology.

In See No Evil by Jill Sherwin, Uhura has to deal not only with her recent amnesia, but although with an Orwellian society endangered by a planetary disaster. Still an average story, but the weakest of the whole anthology. The biggest problem is that the basic premise of the story is a variation of the Nineteen Eighty-Four topic, but without the depth and thoughtfulness of George Orwell’s novel and by an author not even remotely in the same league as him. For starters it’s unlikely that the civilisation would still exist if they would change “history” on such a small basis and at such a high speed as indicated by Uhura’s research and they really let “vanish” everybody involved in events that make changes necessary. The writing style is the most unreadable of the whole anthology and it gets worse during the story, the worst part of it is Uhura’s pathetic little speech in the end. The only interesting part, and the only thing rescuing the story to some extent, is the beginning where we see Uhura dealing with her amnesia, but once the plot on the planet starts the story goes down the toilet.

Dave Galanter’s story The Leader mixes a traditional “stranded on a colonial world under attack by the Klingons” plot with a plot about leadership. From a technical standpoint (writing style, characterisation) it’s a good story, but somehow I didn’t really got what the author tried to achieve with it. To show that Kirk has a natural charisma and is inspiring people even when he doesn’t try too is too little to justify a whole story about it in my opinion. While it’s an acceptable time-killer and an enjoyable read, at the same time it’s kind of a waste of authorial talent.

Ambition, written by William Leisner, shows how Scott and Sulu deal with a crisis when both Kirk and Spock are off-board. I must admit that I enjoyed the first half or so of this story enormously. For maybe the first time we see a realistic look at the crew of the Enterprise and not the everybody of the crew likes and admires everybody else of the crew atmosphere we often get when authors try to capture “Roddenberry’s vision” (oh, how I hate that term) of the advanced human race. I personally like the ambitious Sulu and the unforgiving Uhura more than their “normal” selves. It’s a shame that due to them being never shown that way on TV made it necessary to have them back to their normal behavior towards the end of the story. The plot with the hatching babies wasn’t really able to hold my interest, but nonetheless Ambition was a fun read for me personally based on the above mentioned characterizations alone.

In Devices and Desires, author Kevin Lauderdale gives Spock reason to think about a change of career, when an old mentor of him offers him to work with her at the “Yard”. There isn’t much to say about the story other than that it is average through-and-through. Everything is acceptable, but at no moment of the story I really felt intrigued, neither by Spock’s decision making if he should change his career path , nor by his irritation about Bishop’s behavior.

Where Everybody Knows Your Name, written by Jeffrey Lang, is the last “traditional” story of the anthology. Here we see what happens when Scott and McCoy are mistaken for being Kirk and Spock in a bar. This story is neither having an important effect, nor has it any deeper meaning, but it does what it is supposed to do in a solid way: providing the comedic element of the anthology. It has its fair share of funny scenes and lines and is overall well written. Some things aren’t very credible without a lot of goodwill, especially that Spaytak interprets the lines 30-34 of page 338 in the way that Scott is the Captain of the Enterprise, although he says that he’s not. But, like I said, the story serves its purpose and is an enjoyable timekiller.

The anthology concludes with Allyn Gibson’s Make-Believe. He wrote a story mixing up a traditional Star Trek story with a real world story about the impact of Star Trek on a little boy’s life. Make-Believe is definitely the best story of the anthology. One of the main reasons for that is that Allyn Gibson actually was brave enough to totally step out of the Star Trek sandbox while staying true to its principles. By combining a “conventional” Star Trek story with a “real world” story he is able to show the impact of the Star Trek franchise and making a statement at the same time. I’m normally not a guy who gets to emotional over something I read, but this one definitely had an impact on me.

As a part of a cross-promotion with TOKYOPOP there is a story from the Star Trek manga Shinsei/Shinsei attached to the anthology: Anything But Alone, created by Joshua Ortega (story), Giovanni Johnson (art) and Jennifer Carbajal (lettering). Here Kirk and co. follow a signal to a strange colony world. Not being a big comic/manga fan I’ll refrain from giving this an actual rating, but let me say this: In my opinion this is a very poor way to promote the manga. The story is as unoriginal as it gets and the art is awful.

Coming back to the actual anthology: It’s a solid book. The most positive thing you can say about it is that there’s no total letdown in it, there’s something interesting to find in every story, although See No Evil was really close to become the one foul egg. Constellations has two outstanding stories, As Others See Us and especially Make-Believe, and two stories which deserve a honourable mention, Fracture and Official Record. The rest of the bunch varies between solid (like Ambition) and barely average (See No Evil). Ultimately the most constant of the anniversary anthologies up to the point of its publication.

Constellations (edited by Marco Palmieri) was released by Pocket Books in September 2006.