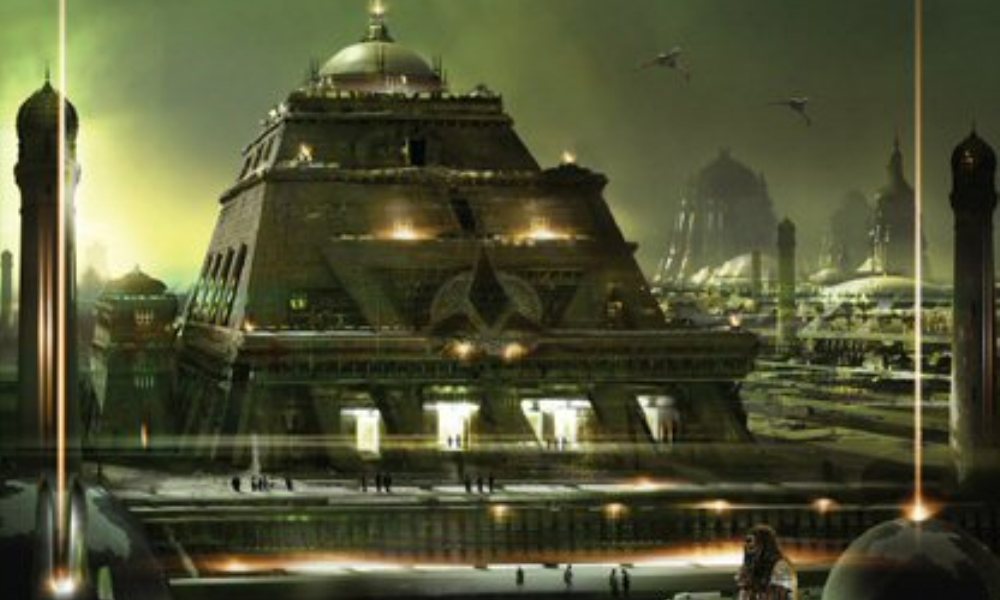 A Burning House is the fourth book in Keith R.A. DeCandido’s Klingon-centric novel series formerly known as I.K.S. Gorkon. The series has been renamed in order to broaden of the scope of the series. While the previous books were focusing on the adventures of a single ship – the I.K.S. Gorkon and its crew – we now see more of the rest of the Empire beside the Defense Force. We still follow the crew of the Gorkon, but since the ship is under repair we see them in their “time off”, among other things at a medical conference, an opera house and on a farm. But even in their time off the members of the Gorkon crew never really get time to rest, when they have to fight against their whole profession, the downfall of their hometown or their own family.

A Burning House is a through-and-through enjoyable book. One might could argue that it’s less a novel than a collection of stories spread all over the Empire, but that’s not a bad thing. Normally all we see when it comes to Klingons is the Defense Force, their ships and the political stage, but A Burning House shows us the other sides of the Empire. We see the farmers, the artists and those left behind with little to live for. Those parts about G’joth’s hometown were some of the most powerful of the book, since they showed that behind all the Klingon’s bravado and talk about battle and honour there are those people who simply had to give up and whose only hope it is that there children will have a better life. The other subplots of the book all have their moments and especially the fifteen’s trip to Kagak’s home was a refreshing change of tone between some “darker” parts of A Burning House. One character I found a bit annoying though was Ba’el, Toq’s childhood friend, it’s hard to see her growing up enough to become the equal mate for Worf she obviously wants to become.

Of course we also see the “normal” side of Klingon life, especially in those chapters dealing with Klag, Rodek and Dorrek. And in those parts is the only bigger problem I had with the book: Rodek never appeared to me as a guy who would be easily fooled, yet he falls for Dorrek’s scheme within a record time. Of course the author is aware of that since that are exactly Klag’s reasons for his decision in the end, but I don’t really see this book’s Rodek mesh too well with the one we knew. Maybe that was intentional, to show the deranged state his mind was in when confronted with Kurn’s memories, but still he was a little too willing to embrace Dorrek’s accusations for my taste. Overall this part of the book is an interesting way to resolve the two sibling-related subplots, though.

Maybe with the exception of Rodek – although you might could make the point that this book’s Rodek wasn’t supposed to be like the one we know – the character work is as masterful as usual. Keith R.A. DeCandido just knows his Klingons and with every book he builds up their characters and backstories so skilfully that the reader really is sucked into their life and cares for them. Most of the new characters are nice additions to the “cast”, especially Kagak’s grandmother, and don’t have to hide behind the regulars.

Overall, A Burning House is the most insightful book about Klingons since the late John M. Ford’s The Final Reflection, in my opinion. If you even have a minimal interest in the race you should definitely check this book out, you won’t be disappointed.

A Burning House (by Keith R.A. DeCandido) was released by Pocket Books in February 2008.