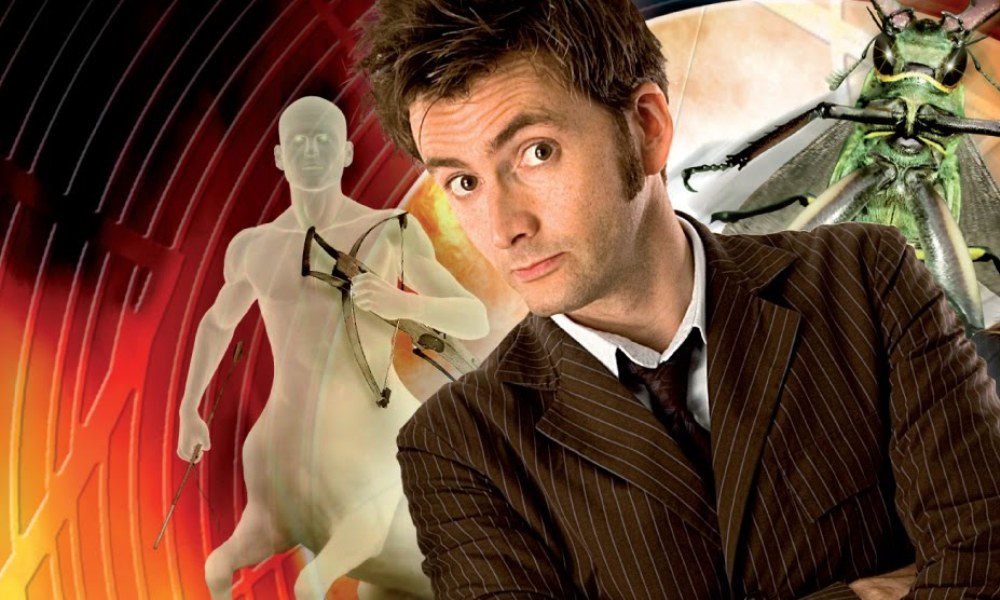 The Tenth Doctor and his companion Donna Noble are due to embark on a brand new adventure in May and, in a first for the new series of Doctor Who, this one’s an audio exclusive. Pest Control, written by Peter Anghelides, launches a new range of prose stories written for audio.

“It’s Starship Troopers meets My Little Pony,” he teases. “Donna accepts a commission in the Pioneer Corps. But something’s changing the soldiers into monstrous beetles, and she could be the next victim – assuming she survives having horses fall out of the sky on top of her!”

Fans of the aforementioned Donna Noble have to wait until later in the year for her to appear in the novels – the next three books to be released all feature Martha Jones – so Pest Control will be the character’s first adventure outside of the TV series. “That was a lot of the appeal when I accepted the commission,” Peter enthuses. In order to help nail the tone of Series Four, “they let me see some of the scripts, under the usual rules of strict secrecy. They’re really good!”

The news of Donna’s return has been unexpectedly controversial amongst some fans of the series, but Peter was pleased at her return to the TARDIS. “I really liked her from the outset, and glad to see her return. She was a reluctant traveller in The Runaway Bride, but in Series Four she’s made a conscious choice, and that will subtly change her dynamic with the Doctor. When I saw the scripts, I think I ‘got’ her immediately, so she was great fun to write for.”

The narrator of Pest Control is none other than the Doctor himself, David Tennant. “I hoped all along that either he or Catherine Tate would read the audio,” Peter reveals. “They’re both such busy people that there was never any guarantee that either would be available.” Did Peter try to influence the choice at all? “I can’t claim any credit for David being the reader,” he says, “though I am completely delighted that he is!”

I ask Peter what it’s like to hear the current Doctor reading his work. “I haven’t heard it yet, so I’ll let you know about this one when I do!” he replies. However, he was lucky enough to have Paul McGann (the Eighth Doctor) read his short story Bounty, which appeared on the collections Earth and Beyond and Tales from the TARDIS: Volume Two. Like Pest Control, it was “an audio-exclusive story, and also the first Eighth Doctor story read by Paul McGann after the TV Movie. It’s very special to hear the current Doctor in a brand new story. It’s the closest I’m ever likely to get to writing for the TV series itself.”

Writing a story that will go straight into audio form is presumably very different from writing a novel. Peter explains that the main difference is the length and structure: “These audios are shorter than a novel, and need a traditional cliffhanger halfway through, for the end of Disc One. The text of the other audios have had to be adapted from the original novels – mostly reducing the word count. Joe Lidster did a tremendous job adapting my Torchwood novel Another Life, and in the process had to reduce it to about a third of its original length. So there’s an obvious first thing: you design the story to be the appropriate length from the outset.”

What other differences are there between the two mediums? “There’s some opportunity to specify sound effects,” he says, “[and] there are some obvious ‘mechanics’ of the reading text you have to fix – make it much clearer who is speaking dialogue, yet avoid falling too much into dull ‘he said/she said’ phrasing. Not all audio readers ‘do’ the voices of different characters, so the text itself needs to clearly differentiate the characters in case it’s read throughout in the same voice.” David Tennant has previously narrated abridged CD versions of the Doctor Who novels, and has worked for Big Finish Productions, with his work being phenomenally well-received. “I feel especially fortunate to have David Tennant performing mine,” Peter agrees, “because I know from his previous audios that he’s simply brilliant at interpreting different characters on audio.”

On a previous visit to the Whoniverse, Peter contributed the aforementioned Another Life to the first set of Torchwood novels. The book was commissioned and written before the series aired. “It was fantastic!” he exclaims. “I was ridiculously excited about the whole thing. I knew that the show was coming, but there was no confirmation that they were doing tie-in novels or audios. So when the commissioning editor phoned me out of the blue, I was flattered and delighted. The first three authors all got a briefing from the script editor about the whole first series, saw some production designs, read many of the scripts, and even got to visit the Hub in Cardiff. Hurrah! What a big kid I am.”

The Ancestor Cell, an Eighth Doctor novel co-written by Peter, famously polarised its readers, and Peter’s website quotes both positive and negative reviews of his work. Is there a secret part of him that enjoys pissing fandom off? “You can’t please all of the people all of the time, as the briefest glance at an online review site on any Doctor Who stuff will reveal,” he says. “I’m never motivated by ‘how can I upset someone’; that would be negative approach, no fun at all to write, and even less fun to read. I want my fiction to amuse and divert and surprise a wide range of readers, so sometimes I may deliberately subvert expectations.”

Some of his past work has been quite arc-based – The Ancestor Cell, for example, tied up several long-running plot threads and started a whole new one for the Doctor, whilst Frontier Worlds formed part of a looser storyline involving the companion Compassion. “It’s a shared universe, and it’s a commercial franchise, so there are limits to what you are allowed to do with the characters and set up,” he tells me, when I ask how much freedom writers have in these circumstances. “There will always be this creative tension between doing something that is recognisably within the franchise and doing something innovative. If I wanted entirely to ‘write what I want’ without any of those restrictions, then I would do something that was completely my own and then self-publish. Even with ‘original fiction’ for major publishers these days there are commercial interests that, to an extent, dictate what you do – your agent, your publisher, marketing, the industry buyers, the book chains, etc etc. You can’t start writing with all those people in mind, of course, but they may all have an influence on your novel before it actually sits on a shelf in Waterstone’s or Barnes & Noble.”

Many fans of the Doctor Who novels are clamouring for the Past Doctor books to return in some form. Is there a place for them in the world of twenty-first century Who? “‘Fans’ now encompasses a whole load of people that it didn’t when the last Past Doctor novels were being published,” Peter explains. “The question for the publishers will be: can they get a return on their investment to do Past Doctor books? The current BBC Doctor Who novels are an amazing commercial success. There are also many BBC Past Doctor novels that never reached that wide an audience. So, to me, that seems like a good place to start, because those are mostly assets that BBC Books already has available to republish with less cost than commissioning completely new stuff – if you count the Eighth Doctor ones, there are over 150 titles. That may not satisfy the dedicated but much smaller core of fans who have already bought them, of course.”

Peter seems to be as passionate about the books as a reader as he is as a writer – I wonder which titles combine both sides, and ask him if there are any stand-out Doctor Who books that he wishes he’d written himself. “Lots of them!” he replies. “If I had to pick three, then for reasons to do with the influence they had on me at the time I read them, I’d choose Doctor Who and the Crusaders by David Whitaker, The Turing Test by Paul Leonard, and Only Human by Gareth Roberts.”

To conclude in style of Doctor Who’s current executive producer (and because it’s so much fun) I ask Peter for three words that appear Pest Control. “How marvellous!” he exclaims. “I suggest ‘bombardment’, ‘polyolefins’, and ‘cardigan’.”

And if that’s not enough to persuade you to check out the CD in May, I don’t know what is.

Pest Control will be released by BBC Audio in May 2008.