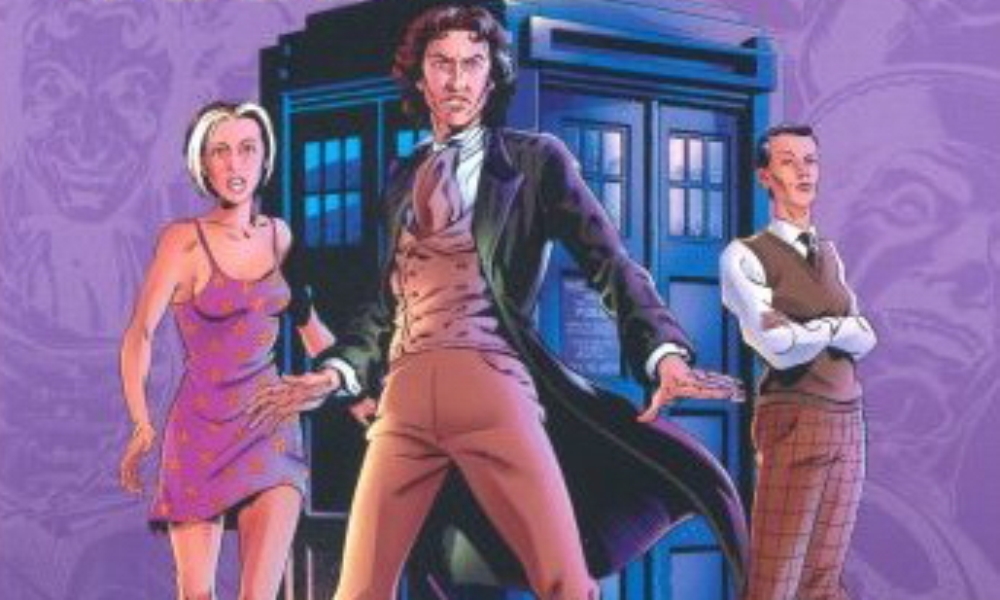 Kicking off the Eighth Doctor’s series of comic-bound adventures is this graphic novel, End Game – collecting together just over two years’ worth of comics, the bulk of which are made up of Alan Barnes’s contribution to the series. Through these adventures runs a rough story arc that introduces us to the Doctor’s new companion, Izzy, reintroduces us to the Eighth Doctor (fresh from his San Francisco debut in the then-recent TV Movie, which I like to call The Enemy Within – a name producer Philip Segal insisted fans could use but nearly none of them did. Except me.) and dazzles the hungry fan’s eye with a whole range of wonderful and bigger, bolder enemies from the television series and beyond.

In End Game, the Doctor returns to the village of Stockbridge, his hometown away from home (as far as the DWM comic strip is concerned) where he promptly becomes ensnared in a trap laid by the Toymaker (last seen in the dusty, mostly-lost television serial The Celestial Toymaker some thirty years earlier). Teaming up with his old friend and serial UFO nut Max, and Max’s friend Izzy (a sci-fi geek with parental issues – shouldn’t be too much of a problem getting the readers to identify there!), the Doctor dukes it out with the Toymaker, eventually coming face to face with the Toymaker’s champion – a dark, toy-version of himself! This is a great place to start with the comics, fans of classic Who should have no trouble with this one – the Toymaker is instantly recognizable and he’s perfectly suited to the medium. The Eighth Doctor (though strangely adorned with massive sideburns) is a welcome breath of dashing fresh air after the many years readers had endured alongside the devious old Seventh Doctor. Izzy, as the new companion, makes for pleasant company as well.

In The Keep, the Doctor and Izzy visit fifty-first century Earth, where Mad Max-style thugs and warlords fight over a barren and destitute Earth, and seek to gain access to The Keep – an ominous futuristic dome where a crippled scientist toils in the hope of saving mankind. On its own, this story isn’t really much to look at. There are a few nods to Magnus Greel and the back-story of The Talons of Weng-Chiang but beyond that I wasn’t particularly impressed. The main thing with this particular strip is that it works as a set up for a bigger story soon to come, and with this in mind the last few images are fairly effective.

In A Life of Matter and Death, the Doctor and Izzy are lured into a twilight realm where the Doctor must face trial for his various crimes against the likes of the Iron Legion, Beep the Meep and Dogbolter. This is an anniversary story celebrating 250 issues of DWM, and so the writers saw fit to bring back all their old favourites from past comic strips – old enemies like the aforementioned Beep the Meep and Dogbolter, and old friends like Sharon and Dr. Ivan Asimoff. As far as these kinds of things go, it’s okay, it doesn’t last too long, and it’s all in the name of fun.

In Fire and Brimstone, the Doctor and Izzy land aboard the satellite Icarus Falling (formerly The Keep), the centre of the New Earth System, and the focal point for a living sun that contains an incredible power source. The Daleks have come to claim this living sun (named Crivello’s Cauldron) in the hope of harnessing its power to help them cleanse all parallel universes of other Daleks, creatures they see as an abomination against their racial purity. Meanwhile, the Doctor’s old enemies, the Threshold (last seen in the final Seventh Doctor strip, Ground Zero) are also present and hoping to stop the Daleks, but they have reasons of their own for interfering. This is a great, fun story. At times the continuity looks like it’s gonna overwhelm everything but things are kept cracking along at a fine enough pace for it all to remain interesting. The Threshold continue to become a fine, intriguing bunch of villains, and the Daleks get to flex their muscles too (the Dalek Contagion, a Dalek wasp-like robot that turns its victims into an incubation chamber for Dalek-controlled nanobots, is a great concept). Chuck in some Daleks from another dimension that look like the fabled spider-Daleks the American version of Doctor Who almost gave us, and some dastardly Time Lord shiftiness lurking at the sidelines, and you have a recipe for a comic strip epic bonanza.

By Hook or By Crook is another stand-alone comic, this time a light-hearted piece where the Doctor gets mistaken for some kind of jam-obsessed serial killer in an alien city, and it’s up to Izzy to save him. I don’t have much else to say about this one, it’s nice to get away from the big epic storylines every now and again, but I think this would’ve been more enjoyable if the makers of the graphic novel had included it in its proper place amongst the other comics rather than just chucking it at the end of the volume as a ‘bonus strip’.

In Tooth and Claw, the Doctor and Izzy land on a tropical island in the late 1930s where an eccentric millionaire named Varney has attracted the attentions of one Fey Truscott-Sade, a British secret agent – and friend of the Doctor’s. Fey has summoned the TARDIS to the island so that the Doctor might help her deduce what Varney has been up to, and soon enough the other guests on the island begin to become vampires. It transpires that Varney is servant to a crashed alien ship known as a Cucubite, a living machine that feeds off blood. This is a welcome historical jaunt for the Eighth Doctor, whose costume and questing manner lends itself to such gothic derring-do, and Fey Truscott-Sade makes for a great supporting character/semi-companion – a kind of butch, female 1930s James Bond; suave, self-assured and always ready to throw a punch at anyone who deserves it! The Cucubite is a great concept too, and its realisation on the page – along with its servants, foaming blood-crazed apes armed with syringes! – is a great dose of balls-out horror for comic strip Doctor Who.

In The Final Chapter, carrying on from the last serial, the Doctor is seriously wounded so Fey and Izzy put him inside the TARDIS and steer it back towards his home, Gallifrey. Once there the Doctor finds himself embroiled in local politics, and is asked by Rassilon (within the Matrix) to prevent disaster from befalling the planet. It soon transpires that the Elysians, a secret Time Lord chapter hell-bent on ushering Gallifrey into a new age of conquest, are at work and that the Doctor may be too late to stop them from changing the course of history. This story loses its way a little. The ending, involving the Elysians setting into motion a long-standing plan to change time, is a bit convoluted and over the top. What does work however is the steady building of mythos that these Eighth Doctor comic strips have been working towards, and the reintroduction of Shayde (the Matrix agent last seen in the Fifth Doctor DWM comics) along with the intrigues of Gallifreyan society, are particularly effective. Of course, the biggest aspect The Final Chapter is the controversial ending, where the Eighth Doctor regenerates into a new, balding Ninth incarnation…

In Wormwood, whilst Izzy and Fey try to adjust to the Doctor’s new look and personality, the TARDIS is attacked and drawn to the Moon – the location of the Threshold’s base of operations. It transpires that the Threshold, greed-driven teleporting mercenaries for hire, have been working towards one very particular enterprise, and the Doctor – in his newly weakened state – has now afforded them the opportunity of finally reaching their goal. The origins of the Threshold are finally revealed in what, unfortunately, appears to be their last outing in the comic strips. The nature of the Doctor’s regeneration is also revealed to be an elaborate ruse on the Doctor’s part – something which works as both a great stunt in terms of tricking the reader and also makes perfect sense in terms of the twist-packed plot. The villain of the piece, the Pariah (an exiled Gallifreyan superweapon), is a lot of fun too, and all up I’d have to say that Wormwood wraps up the first volume of the Eighth Doctor’s adventures in fine form.